The Winner Amsterdam is the largest and most important Show in the Netherlands. She is held yearly in November in the RAI in Amsterdam and is in fact a must for every exhibitor. One year on forehand you know who is judging. For the Bearded Collies it was Mr. Gerard Jipping, President of the Dutch Kennel Club. For the OES it was Mr. M. Faulkner from the United States of America. Years ago I had already sworn not to show under a judge from the USA. They have a completely different type of dog and partially even a different Standard for our breed. He only had 21 OES entries, of which 4 had traveled many kilometers to show under Mr. Faulkner. Their effort was rewarded and except for one OES they had won everything. I am curious if we are going to see more of them  at shows in the Netherlands. Since a while, there where rumors going on, who had the most changes with this Judge, due to private contacts etc. etc. Now there are many of such rumors going around, but in this case they all where true. For days I have had been washing and grooming and on Saturday the 3 dogs where ready and just had to pack the car and set the alarm clock to 03.30 Hrs. There was a lot of fog and I wanted to have 30 minutes more time, just in case we had to start driving slower. At 06.45 we where at the parking at the Halls, directly in front of the entrance of the Amstel Hall. Now we had to wait until 07.30 before we were allowed in. On Monday I have let everything bypassing my mind and discovered that we stood in front of the hall at 6.45  and at 15.30  I have stitting on a chair for the first thim that day. At 18.15 we left the hall, packed the car, quickly went to a restaurant with my dearest friend Eef Martens (who had been so kind to join and assist me with my 3 dogs and made pictures). At 22.30 we where home, took care of the dogs, styled the photos for Facebook, otherwise the news is already old….. and at 01.00, completely knocked out went to bed. BUT, with the beardies it couldn’t have gone better and that made our day to a perfect one.

With my two OES King an Jadore I had the feeling that Mr. Faulkner had no clue was is written in the Standard. Over a raising topline, something breed typical with an OES, the colour of the coat or the structure, he has nothing written about. The judging report of an OES owned by a friend of mine consisted of 7 words!!!!! In the judging report of my Kingsize was written that he is too long and with Jadore, that due to my wrong handling she was looking too long. Than I, even after 40 years, still don’t have any clue about how to show a dog in a proper way. Unfortunately judging reports and their verdicts are unvoilable, but otherwise you should do something against it.

On Saturday the car was packed and the whole bunch ready for the journey. 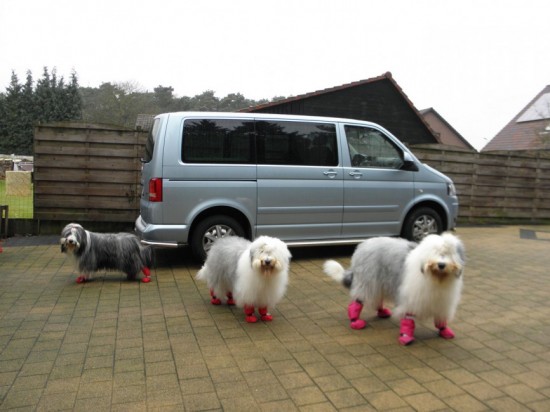 take a guess on which judging report was written: TOO LONG??!! 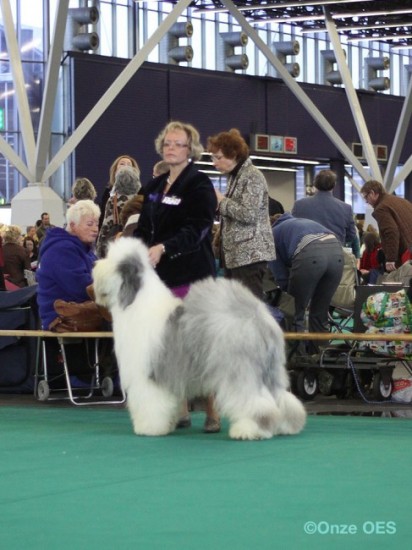 “King” shows his beautiful movement, that Mr. Faulkner apparently has not seen. 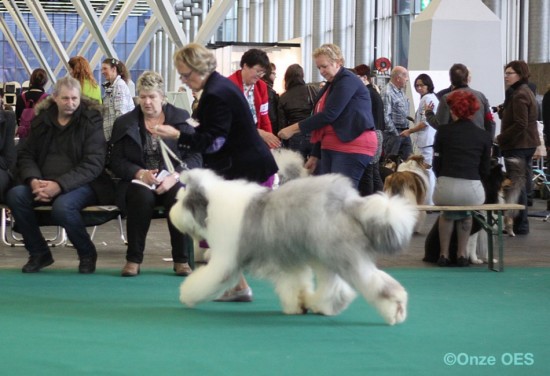 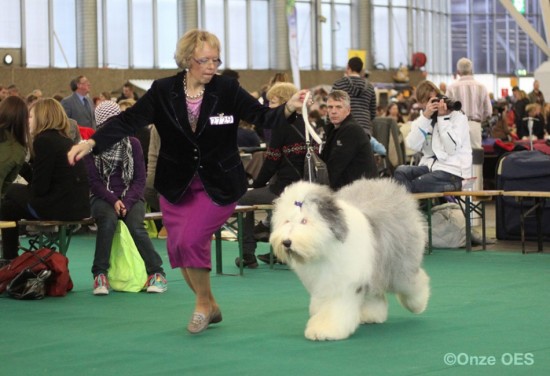 Our “Jadore” also has a beautiful movement, but here Mr. Faulkner thought that she was too long in her movement. This is caused by the fact that I make mistakes when showing…….. 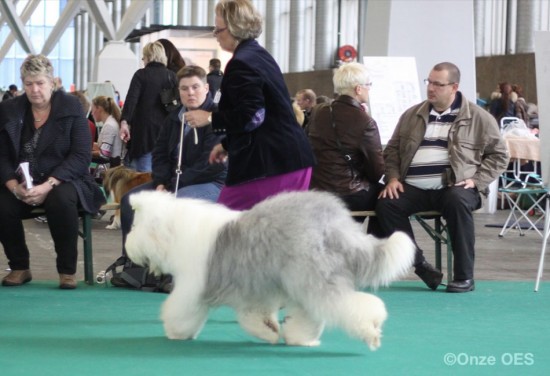 search for the mistake …… 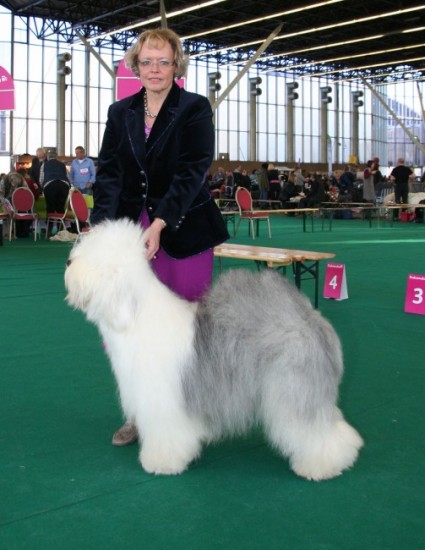 Chris Beirendonk was at the scene with her 11 month old “Koko Chanell aus dem Elbe-Urstromtal“, but also she got not more than a 2nd place in the Youth Class. However, had 5 dogs in her class, whilst Jadore and King became 2nd of two. We can be glad that there where not more dogs. For sure I would have become last. 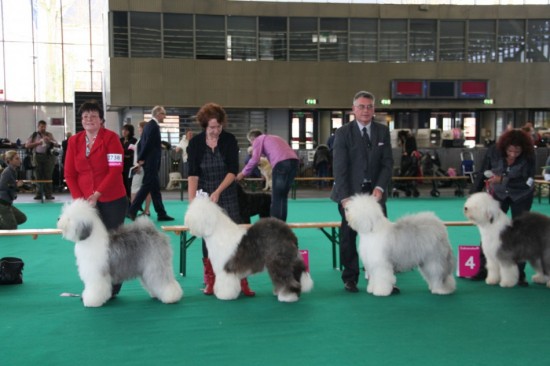 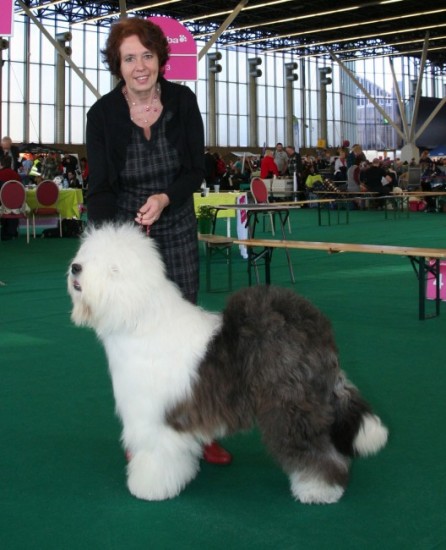 The photos from the beautiful movements, where made by Elles de Border.

Our Winner Team: Chris Beirendonk with Koko Chanell and our Beardie “Lasse”, Conny with Jadore and Kingsize. Behind the camera is my dear friend Eef Martens. 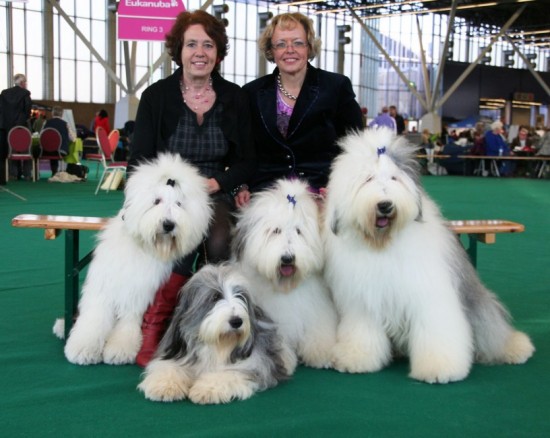 this is what King thought about the placements and judging reports. 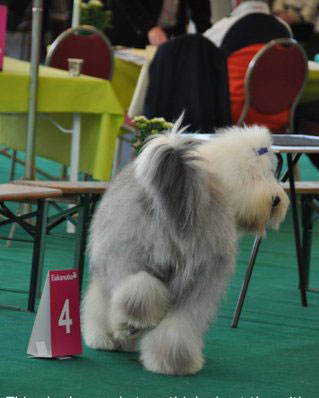