Over the last 48 years, we have bred many wonderful dogs, of which 276 became famous showdogs. 4 of these champions you see on the picture who is taken  in Almkerk/Netherlands 1993. It shows the Beardie males Ch. Shilstone Diplomat and Ch. Shilstone Choir Boy together with the 2 Bobtail ladies Ch. Uniclever and Utopia aus dem Elbe-Urstromtal.

It is almost 40 years ago that we had our first litter. During the many years 157 OES champions, have proudly and successfully represented us worldwide at numerous shows.
Homebred champions

Another 8 Bobtails have to be added to this result. They where bought from other breeders but made up as champions by ourselves.
Made up champions

These dogs got their own homepage containing more information like their pedigree and showresults. 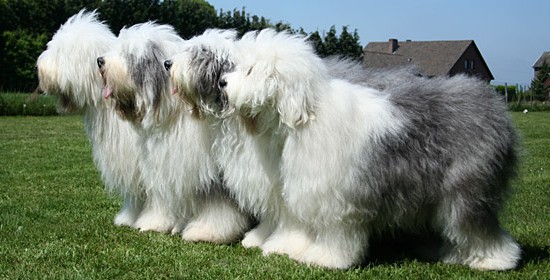