I love shows and showing. Since 28/5/1972 I am infected by the show virus. At that date I showed my “Cora vom Glinder Berg” for the first time in the Holstenhalle in Neumünster. My vet was the person who pushed me to visite a dogshow in 1972 and after we had succesfully fullfilled it, he asked me why not breeding from your girl?

The successtory during 40 years is so extensive that I could write a book about this chapter only. Actually my dogs have won everything that can be won in Europe at the top. Many, many Best in Shows, countless Group wins at all the important shows in Europe, but also in Israel and the USA I was and still am succesful.

One of the ultimate highlights was the first CC in England with “Ch. Zermatt aus dem Elbe-Urstromtal”. “Tarzan” was only one day out of prison (6 months quarantaine in GB) and kept in wonderful condition by his co-owners Pauline and Colin Barnes (Macopa OES). On June 13, 1994 he was shown at the Great Malvern show under breed specialist Mark James and won BOB. Later on Tarzan had a dreamcareer in GB and won 13 CC’s all together. In the meantime I wrote history in 2001 when “Y’Lookalike” won 3 CC’s and became the first “continental” Bobtail with the English champion title (breeder/owner handled).

My principle attached to the showing is: “A champion is only a champion when he is as good inside as he is outside”, meaning his hips should be A or B, his eyes should be clear of inherited eye-diseases, he should not have undergone surgery on OCD or something similar, in a few words: only a healthy champion is a real champion!

It is almost 40 years ago that we had our first litter. During the many years 135 OES champions, have proudly and successfully represented us worldwide at numerous shows. 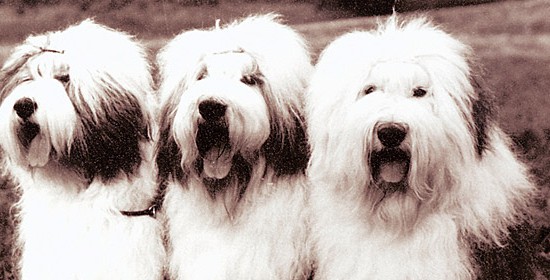