The Christmas show in Wijchen/NL.

The Int-Show of Wijchen, also known as Christmas show, is the  finalshow of the dutch showseason. Eef Martens and Guffy in the luggage together with Jadore. Actually we went for Guffy, the beautiful Beardie Bitch, but to go with only one dog is boring. Therefore “Doro” had to come with us. And of course…. the rings separated from each other at far distance and judges that started simultaneous judging of both breeds. This time I choose for “Jadore” and it was a good one. She won with her 16 months of age the Intermediateclass and became Best Bitch. After this she had to take it up against her father, “Ch. Incognito of Snowbootbears” and became Best of Breed under Mr. Mark Wibier/D. The crowning was a 3rd place in Group 1.

Here some impressions of Wijchen, made by Eef Martens and Ernst van Scheven. 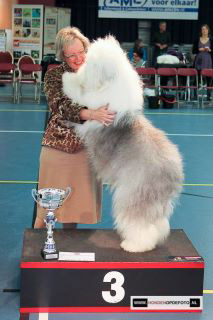