We had vacation and so did our dogs. They stayed at home and where taken care of by Daisy and her children and got spoiled. Due to the enormous heat, beginning of Juli, the dogs only wanted to stay in the kennel because there is an aircontioning 🙂 They are spoiled aren’t they?

However, the heat didn’t stop Chris and Eve Jone from showing and they had travelled to the Open and CC Show of Great Malvern in Wales. An excellent Show ground, where I have showed many times myself. “Pebbles” achieved wonderful results: At the CC Show of 07 Juli, with judge Mrs. Jenny Joice/UK, she won the strongest Class, the Limit Class.
At the Open Show, the next day, she became BEST IN SHOW, with judge Mr. B. Browne-Cole. We have received some nice pictures.

And BEST IN SHOW at the Open Show

On Saturday, 18 Juli 2015 a Int-Show was held in Liege/B. The traditional and holiday Show. The 5 entered Bobtails, were judged by Mr. C. Calcinsti from Italy. Norman Harrison was alone in the Youth Class and therefore became 1st with Excellent. Ch. Keen on You was the only adult male and received the CACIB. In the Youth Class where also 2 Bitches. Our “No Limits” (Senta) won this Class and won over the present Champion Bitch Best of Breed and over Norman Best Junior. 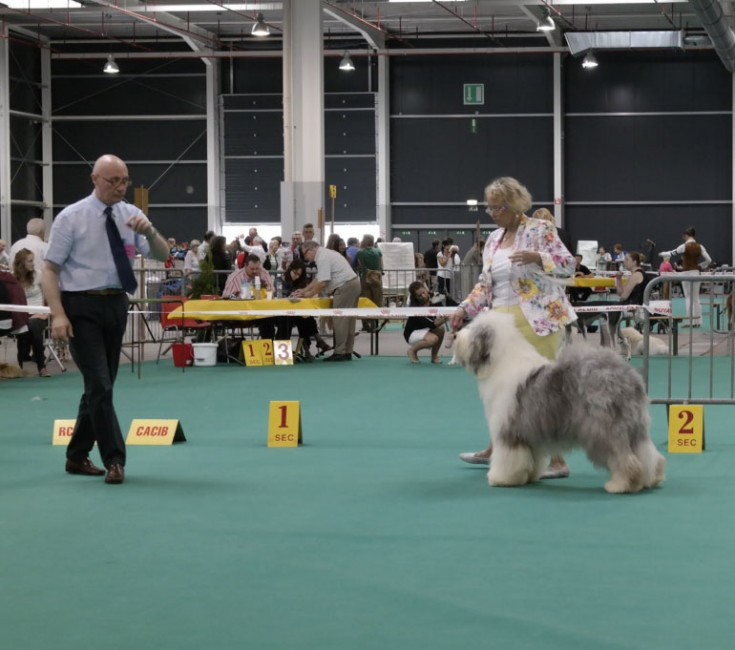 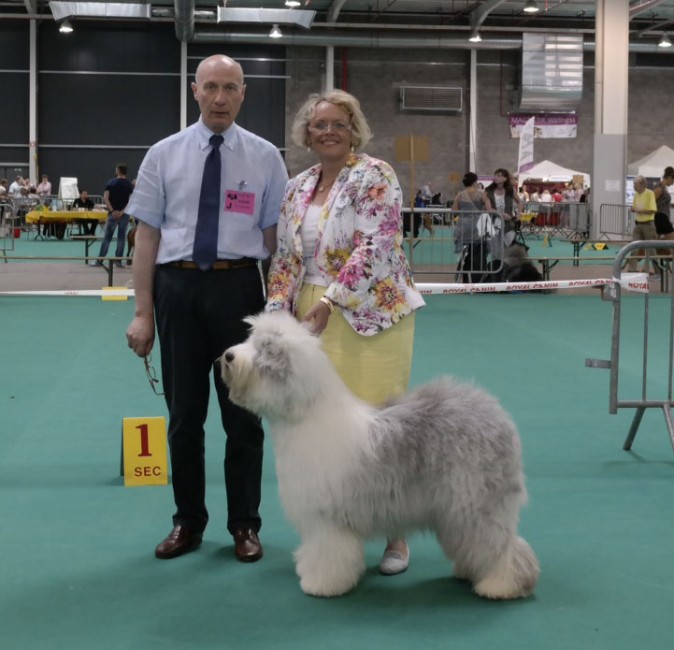 During the last weekend, the two day Int-Show of Rotterdam/NL was held. This has always been one of my favorite exhibitions. New this year: A double Show. For both these days, I had entered our “Norman” in the Youth Class. Senta had to stay at home for a reason. Chris Beirendonk and I had decided, that we would going to Show the wonderful “Nola” of Willy and Ron van Opijnen. Two years ago, Willy had suffered a heart attack and is physical not in the condition to show.
Nola is being taken care of by Chris and it doesn’t make any sense to compete against eachother. Saturday, Mrs. R. Chiodi judged and on Sunday, Mr. Claude Ritter, a Breed Specialist from France. It was a very succesful weekend:

On Saturday, Norman Harrison became Best Male and on Sunday, Res-Best Male. Both out of the Youth Class. 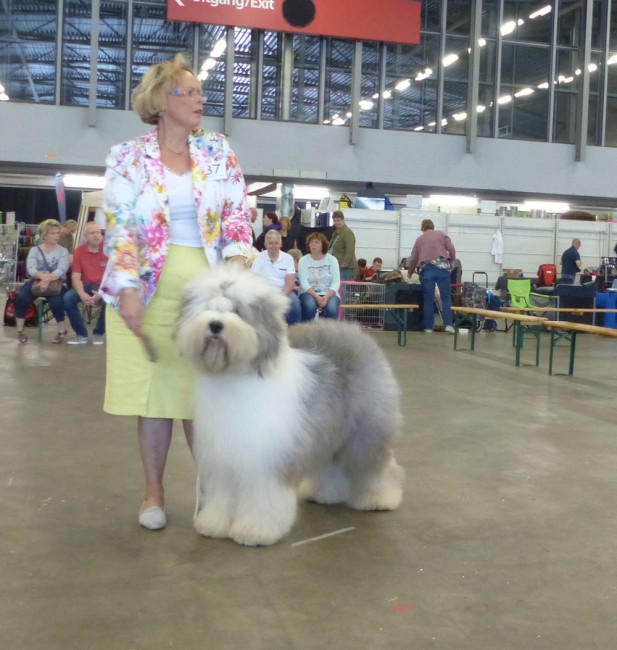 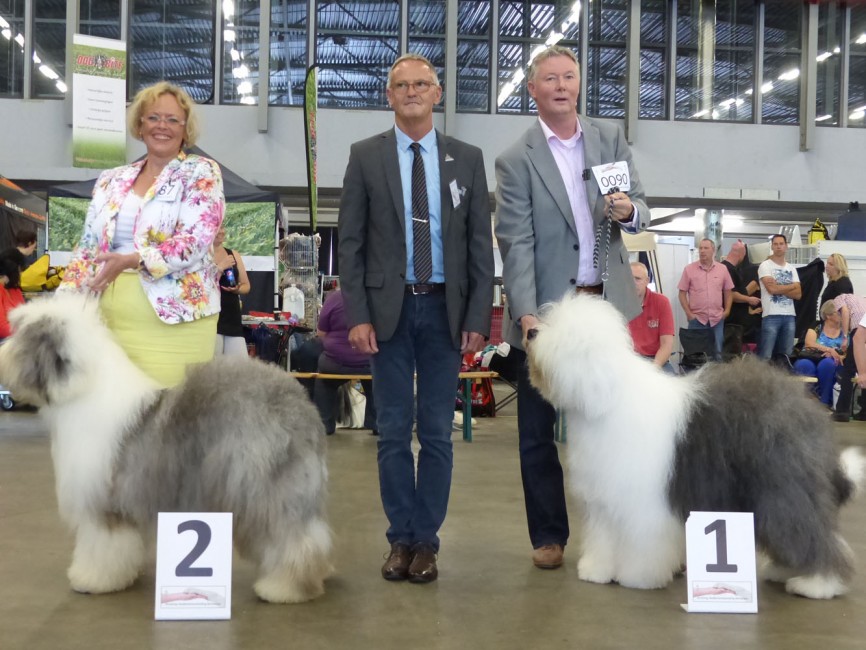 This was the row for Best Male: Norman, Sam I Am Cap-a-pie-Cartouche, Law of Love how to fall in Love and Quaterback 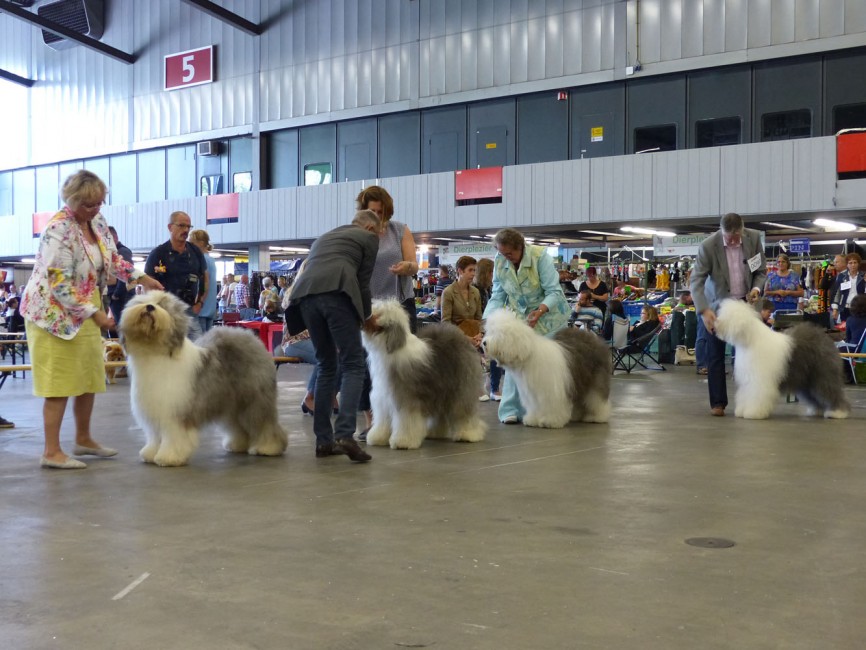 Now I am Exquisite aus dem Elbe-Urstromtal won on both days the Youth Class. Saturday even with Res-CAC and now carries the Title of Netherlands Youth Champion. 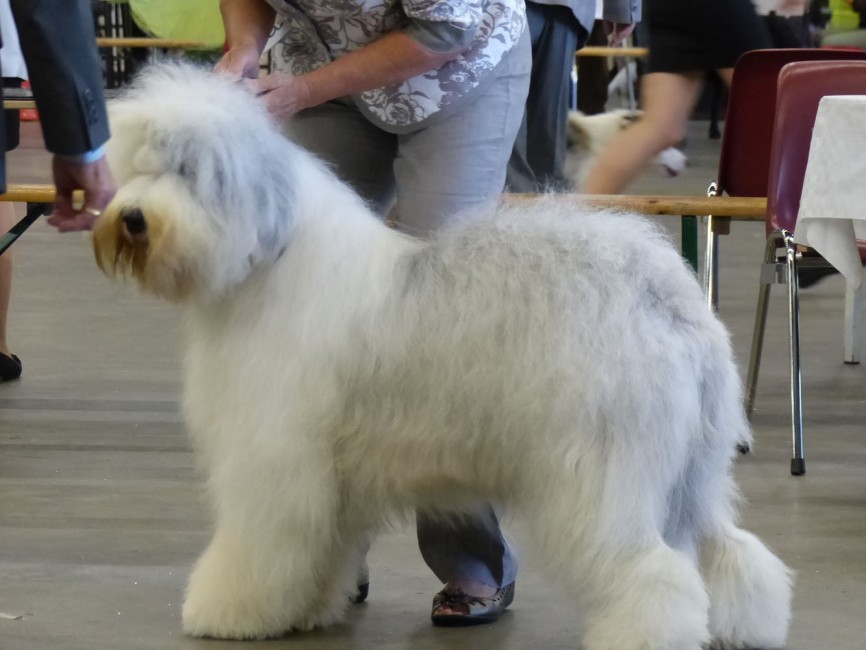 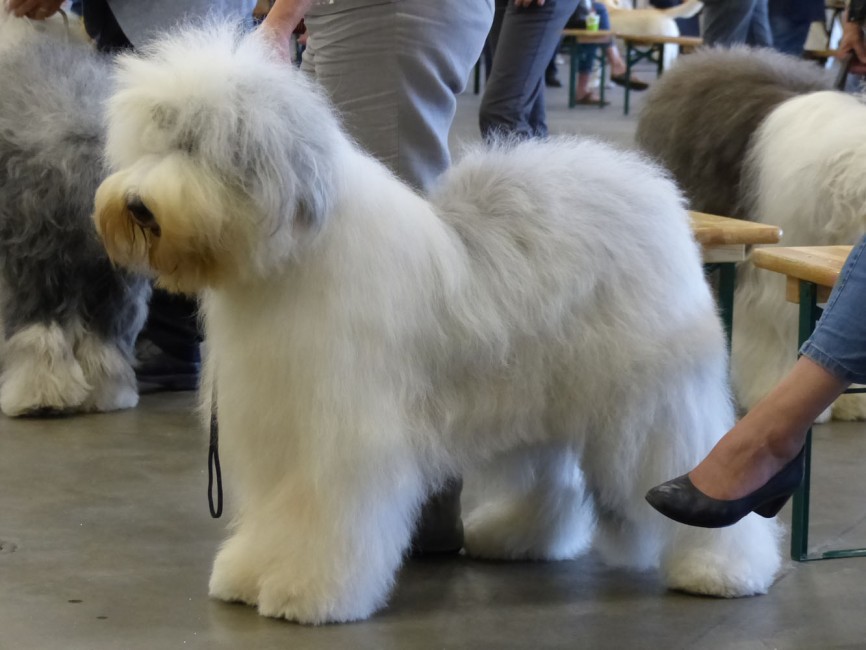 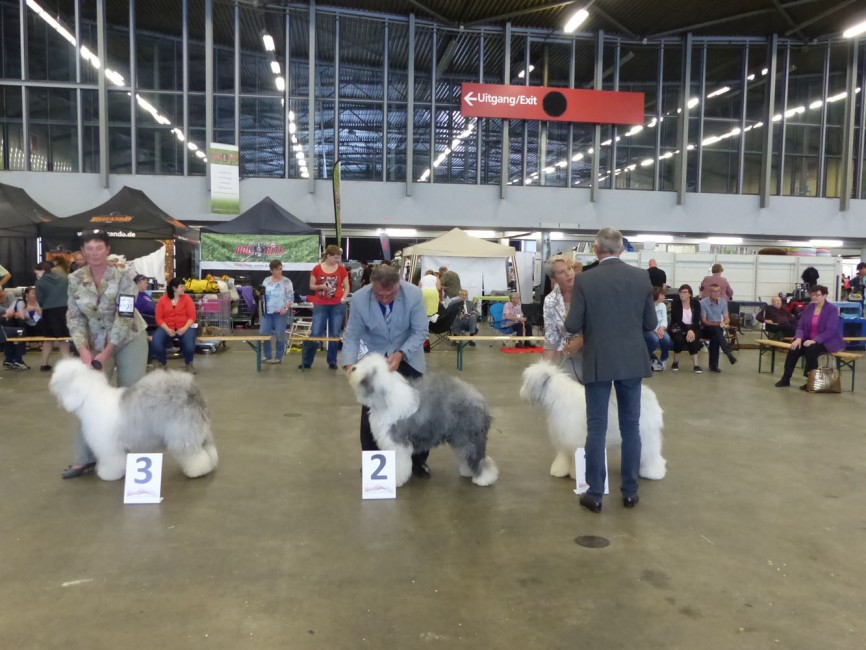 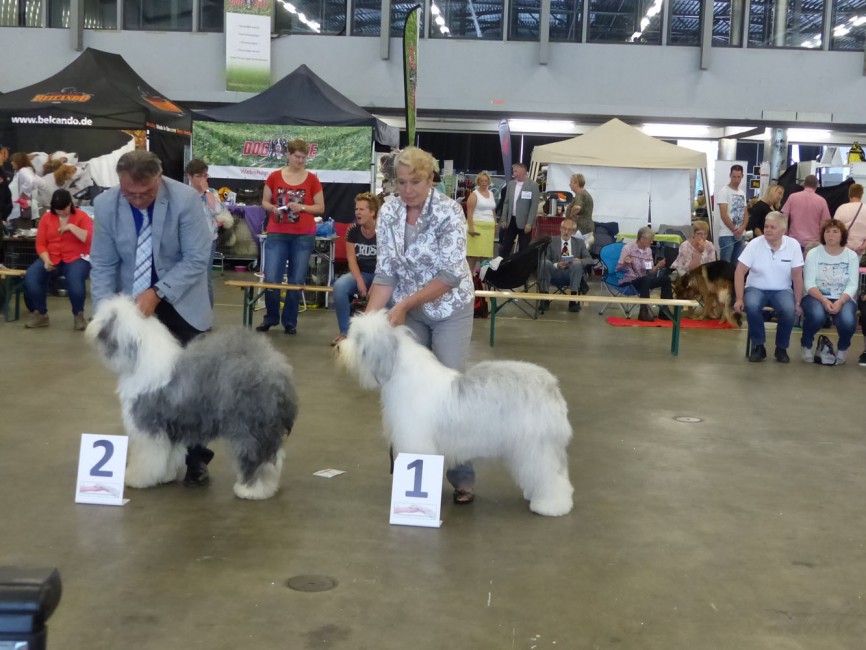 Chris had taken her Look at me at Snowbootbears with her and was also very succesful. Both days Best Of Breed, new Netherlands Champion and at the 1st day 2nd in the Group. 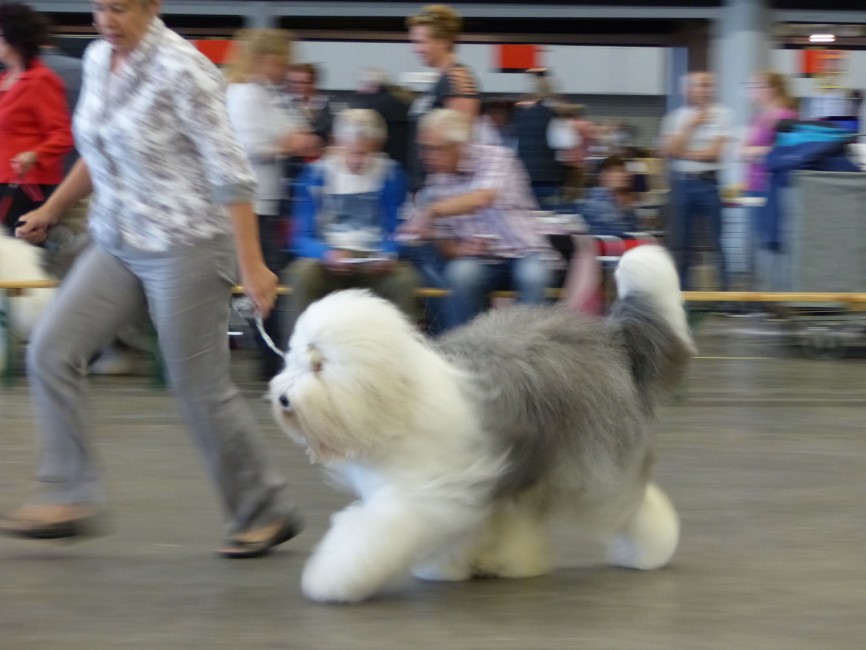 The small group of Bobtail exhibitors had a cozy time together, at this Show. This makes everything a lot more comfortable.

We even had enough energy left, to have a “Star Picture” taken of our Norman. 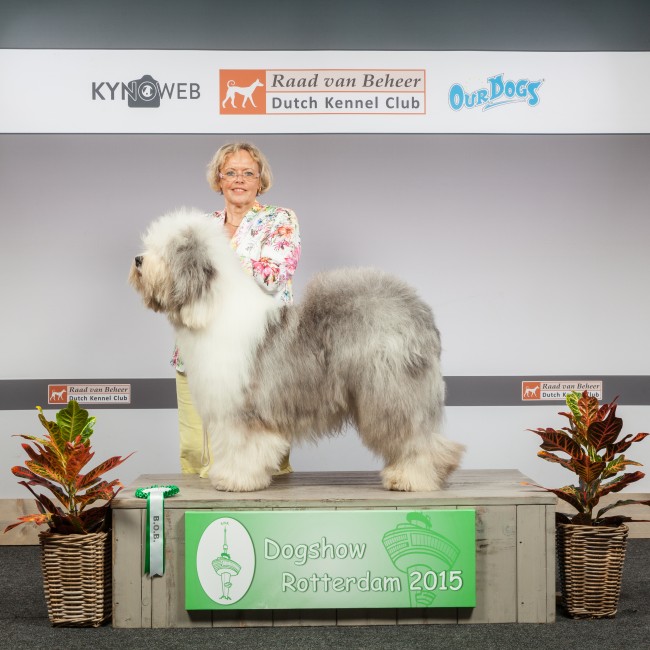