In Hazerwoude-Dorp which is close to Amsterdam and The Hague there was a double CACIB on the weekend 3 / 4-11-2018. In the Netherlands, everyone knows this show as Bleiswijk, where it used to be held instead before they  moved into these beautiful bright halls. On Saturday, a Lady from Sweden was the judge for our breed. She is  collie breeder  and is also very successful. I never had her as a judge so it was exciting. There were 11 OES registered and I registered “Anna” with her 16 months in the intermediate class. We left in the morning around 6 clock and after 180 km we were on the large free parking with our Anna. Mrs Skalin judges quickly and it was our turn around 11am. Everything she had judged before found my full approval. “Anna” looked very beautiful and did everything right and at the end of judging our Anna  became Best of  breed. GREAT…. The results can be found as always at www.oes-bobtail.de
Best of Breed with 16 months  “Q’Anna Anka aus dem Elbe-Urstromtal”  (Ch. Macoes Barcardi x Nottonight aus dem Elbe-Urstromtal)
in the mainring “Anna” was seleted under the last 6 from the strong group 1. Judge was the Irish gentleman Mr. Paul Lawless

Best male was “Touch of Charm Everywhere You Go” from Richard and Diane de Severen. He is a son of my Darling  “Multi Ch. Norman Harrison aus dem Elbe-Urstromtal” who is the litterbrother to Anna’s mother 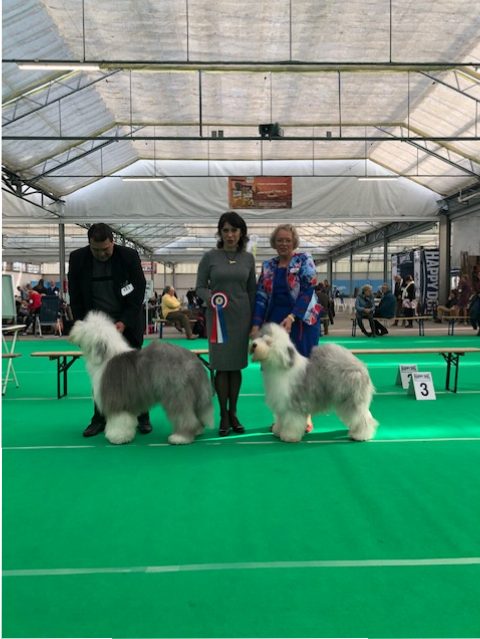 Then we went off to the hotel to have a rest. But if you meet good friends it will be 11pm at the bar. That can not go well and I had a big migraine the next morning and was knocked out until 10am. Anna lay relaxed on the brushing table and waits quietly until I feel better again. 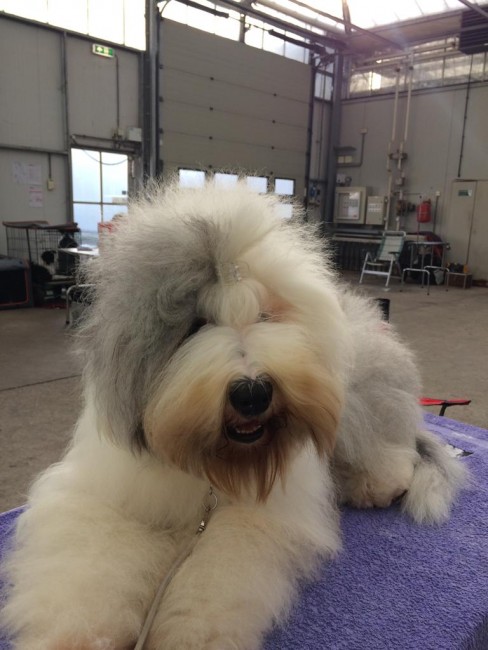 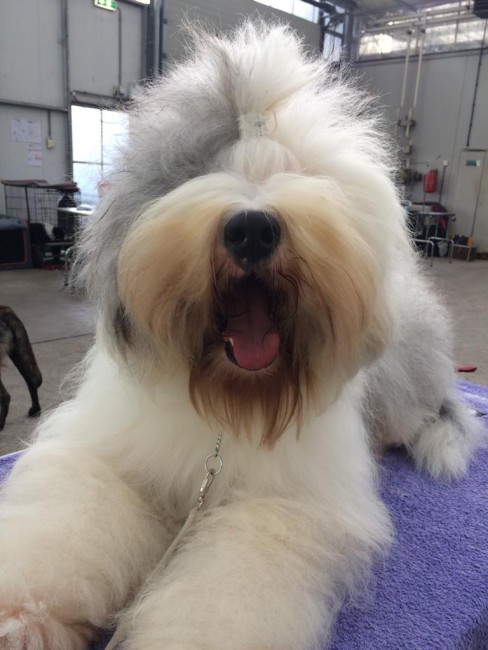 On this day the judge was Mr. de Gids from the Netherlands. Anna was alone in the intermediate class and there were registered 8 OES today.  Mr. de Gids complaind in his judge’s report on Anna that she was missing some pigment on her lower eyelid. That’s right, is about 0.5 cm. But in the breed standard is still standing, the full pigment is desired but is not mandatory …… Anna received from Mr. de Gids only her excellent 1, nothing more

But what should I complain about! Willy van Opijnen won with her“Ch. Pipa Middelton aus dem Elbe-Urstromtal” and won Best of Breed . 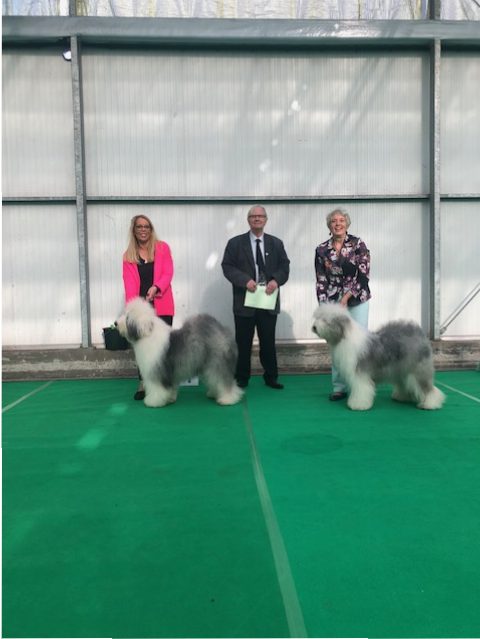 In the ring of honor in the afternoon, she was placed as the 3rd of Group 1. Judge was Mr. de Gids. 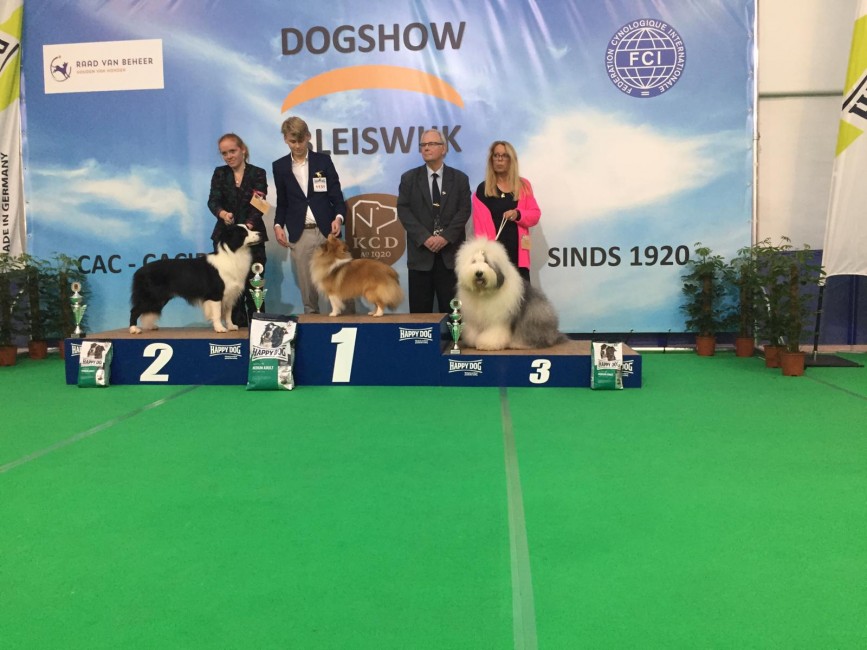 Also on 3-11-18 Ivan from Serbia with his “Helena” (Q’Helena Rubinstein from the Elbe -Urstromtal) was at the exhibition in Kragujevac. Judge was the Serbian D. Radenkovic and Helen became Best of Breed. She is the litter sister of my Anna 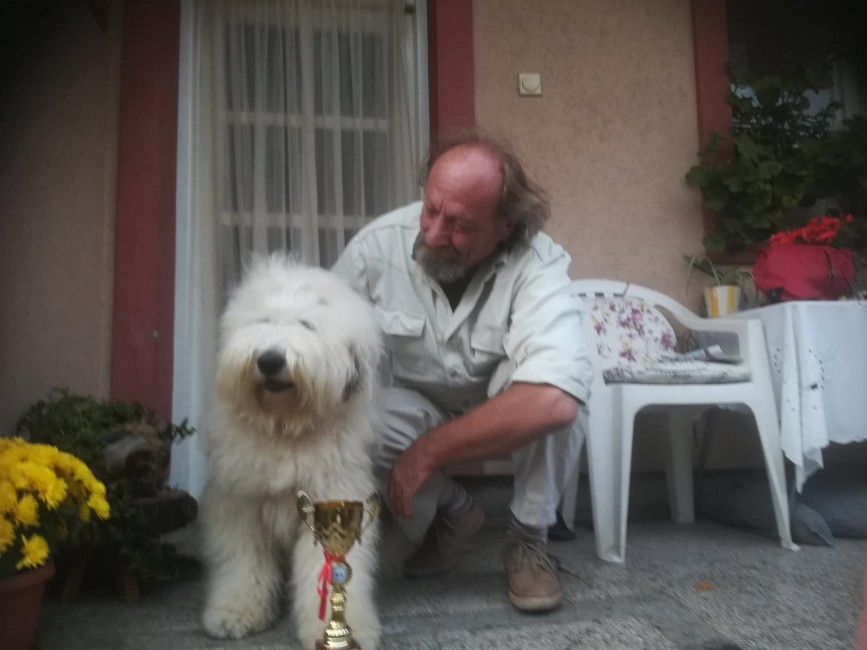 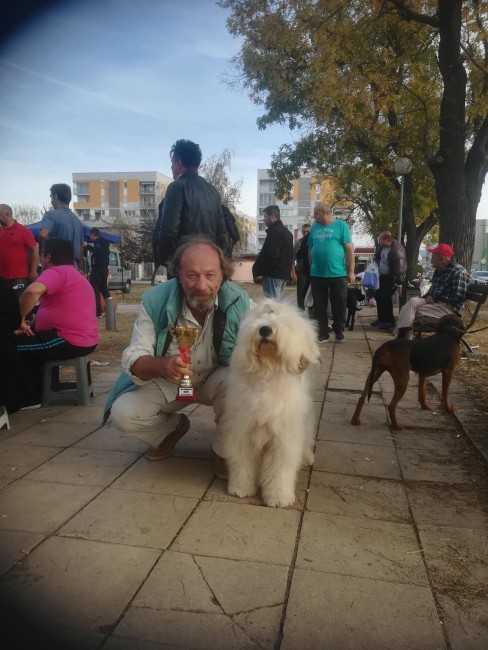 At the Workingbreeds Show in Edingburgh, UK, Ann Hodgenson won the Open Class with her Martha “Obsession aus dem Elbe-Urstromtal“.

Unfortunately,I have not received any photos yet

On the 10th and 11th of November, the National and International Show took place in Karlsruhe / GER. Big bright halls, lots of space, free parking and great food and many stalls make this show so enjoyable. Sidney (Queensize from the Elbe-Urstromtal) is still so young but already has 2 CACIB’s in 2 countries. Therefore, I thought it would be a good idea to try in Karlruhe at the Judge Claude Ritter / France, who judges on Sunday at the IB, togive it a chance for the 3rd countire. On Saturday we had luck with the Austrian Judge  Mr. Erwin Deutscher, who liked Sidney so well that she was Best of Breed. On this day 15 OES were registered and 13 were present.

Karlsruhe Friday evening at the hotel, Sidney has to cuddle fast. As an exhibition dog life is very “exhausting” 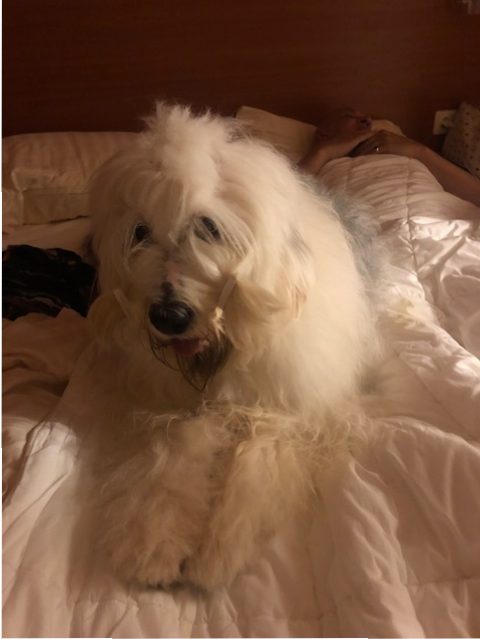 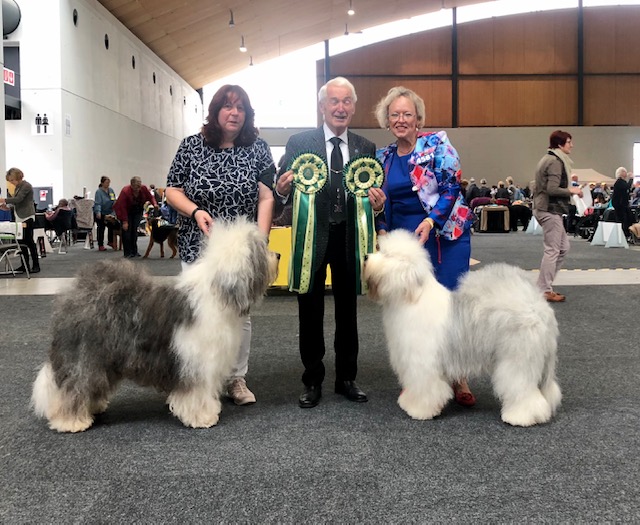 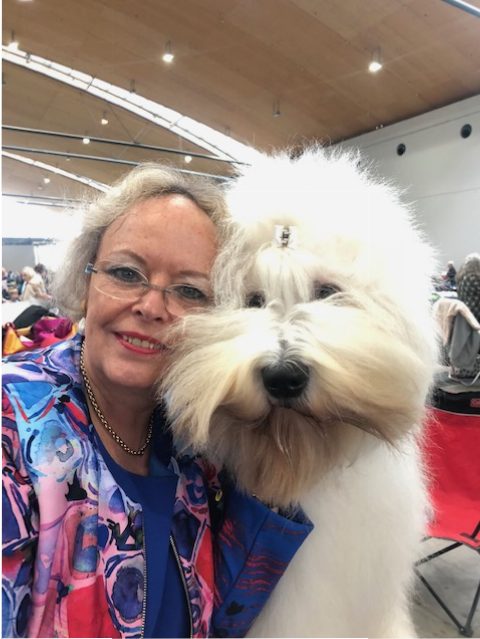 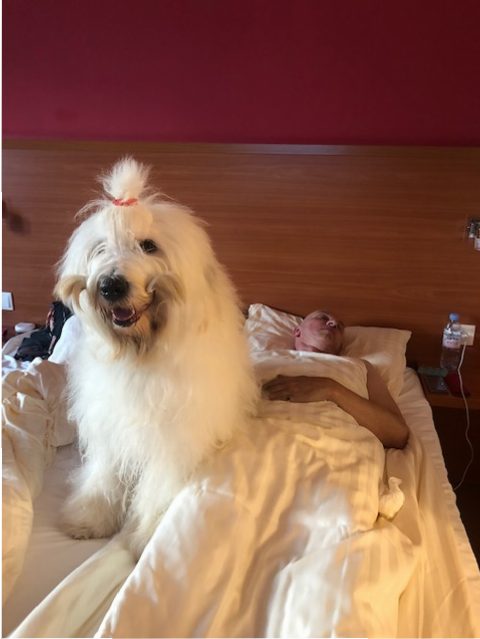 What really scared me on these two days was the overall quality  of my breed. According to the standard, the OES should be a square dog with an elastic gait. I think you should always keep this standard in the mind of  breeders and read them again and again at the breeders’ meetings.  Unfortunalty most breeders  are not up to date of what the standard says, how  an OES should look like. I read the standard several times a year. Brown hair is not allowed at all and the minimum size of the bobtail is 56 cm for a bitch and 60 cm for a male. Small is cute but too small wrong. Sidney is exactly 56 cm so at the minimum. I’m 164cm . If the exhibitor is very tall, she would look tiny. On the other hand, if the exhibitor is very small Sidney would look very tall, though she is exactly in size. I fear that the judges should definitely use the bar again. 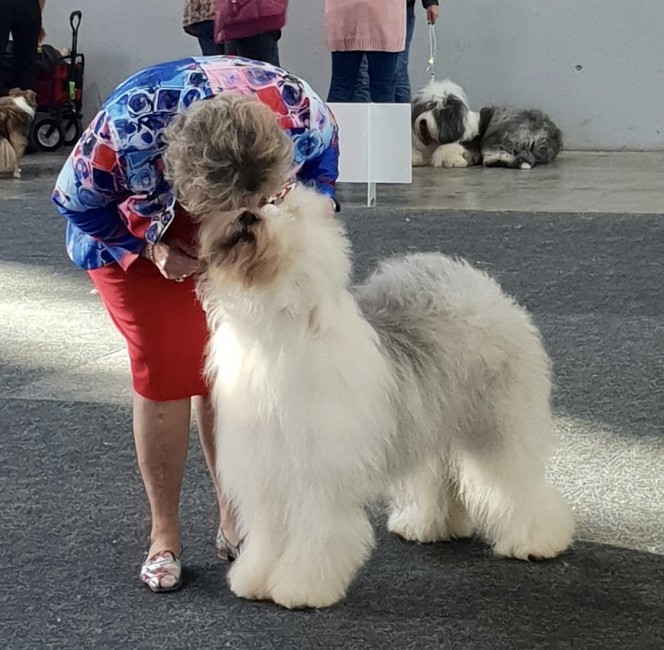 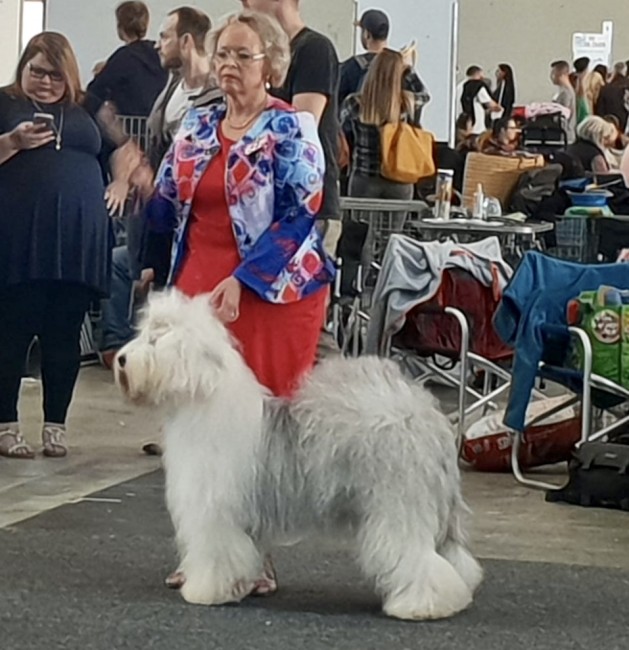 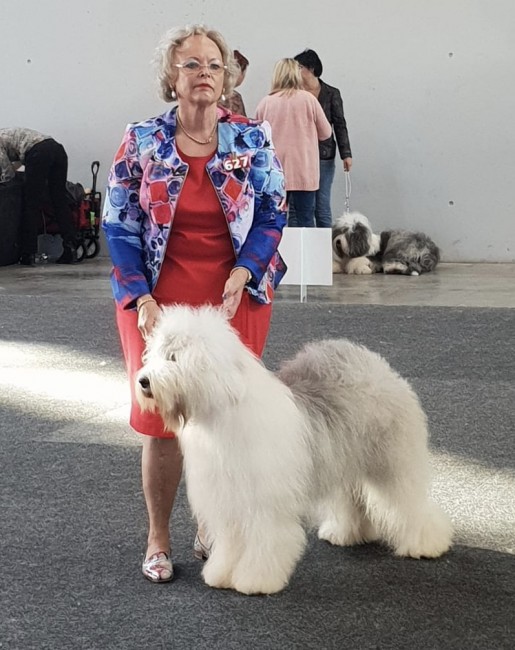 Thank you Mrs. Weissmann for the lovely photos and videos

The intermediate class bitches on Saturday as well as on Sunday the biggest class. On Sunday, 20 OES were registered and 18 were present, even a very nice  champion bitch from Switzerland was present. 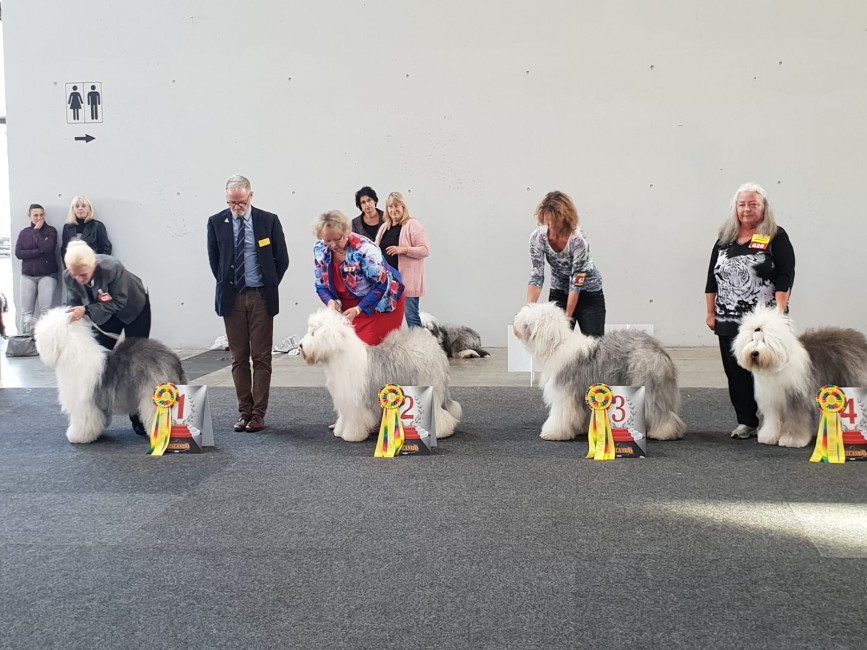 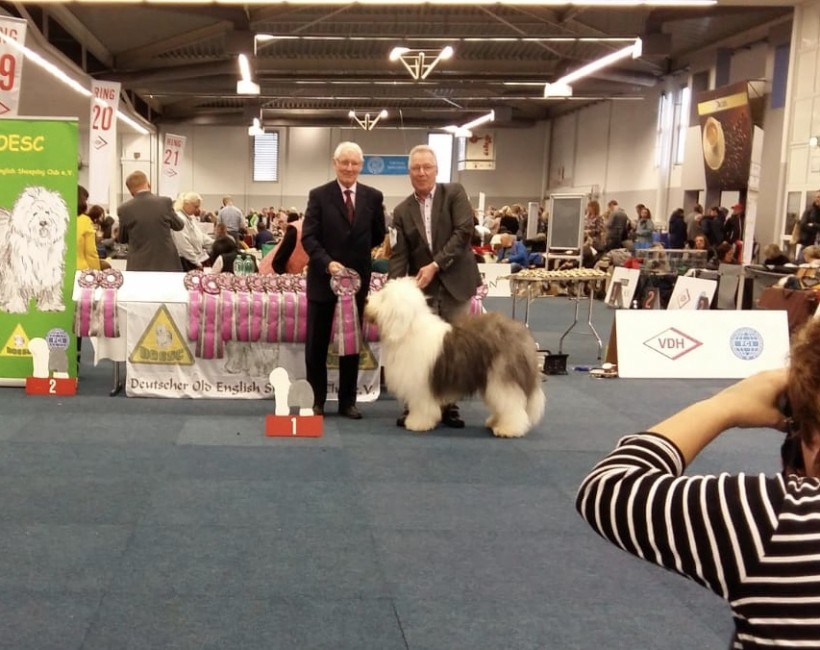 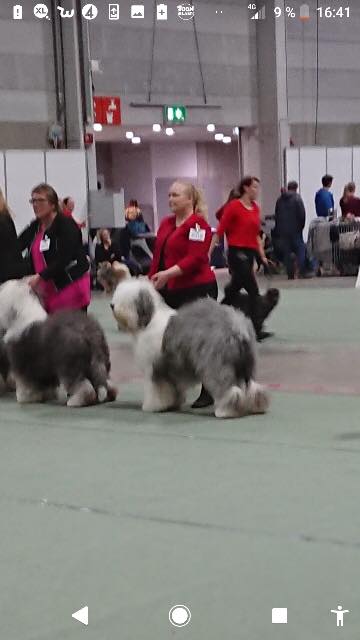