An adventure of 3411 kilometers

It should and had to be! I finally wanted to get the 3rd country for my Sonja, for her title International Champion. She turns 3 in July and she should normally have puppies. In Corna times it is anything but easy. But Conny wouldn’t be Conny if she let that stop her! We searched and calculated and read a thousand Corona rules. I had finally organized everything: Corona safe and compliant with the regulations. We registered for 4 exhibitions They took place on April 29th and 30th, 2021 in Medugorje in Bosnia-Herzogovina. 2x CAC and 2x CACIB each, exactly what I needed for Sonja. Of course Lilou also came with us, there was a chance for a first CACIB and CAC’s.

It was 1686 km outward journey to Medugorje in Bosnia-Herzogovina and 1725 km return journey. The dogs were placed (as it was planned), Doro and Anna went to Bechstedts and Norman was supposed to stay with Monika. Unfortunately, a Bearded Collie bitch from Germany decided not to be ready for her mating in time and an OES bitch from England wanted to come to Norman. That’s always the case when you want to leave! It means stress !!! With the help of Chris Beirendonk and Marja Ojevaar, who were responsible for the males and our dear Daisy, who took care of Norman, Lasse and the beardie lady in season, it was organised . These two matings alone are worth a long story.

On Tuesday, April 27th, 2020 we started to Aachen/Germany at 7 a.m. Before that, of course, we had insured the car with the ADAC, bought a safety bar, arranged all vignettes for Austria and Slovenia and booked the hotels. At 8 a.m. we were at the Corona test center in Aachen for the rapid test and the PCR test. The rapid test was required to stay overnight in Croatia and the PCR test to enter Bosnia. of course we had carried out a quick test at home the evening before, which was negative. That was also the other two tests the next morning. On the first day we drove to just over the Croatian border and stayed there in a small guesthouse. The next morning it was only 550km to drive to our destination. The weather was bad, a lot of rain and a lot of clouds and wind. The route from Zagreb to Bosnia runs through the mountains, a lot of landscape, little to see. Unfortunately no time for a detour to the coast in Split. We left the EU on the border with Bosnia and had cleverly bought a roaming package from the telephone company. Otherwise we wouldn’t have been able to surf much on the phone.

We arrived at our hotel around 4 p.m. A fantastic facility, with many bungalows, small watercourses, and some animals, such as peacocks, donkeys and chickens. It would be the ideal location for a EURO-OES show. The hotel was 10 minutes from the exhibition grounds. Of course we explored that so that we knew where we had to go the next morning. There were no disabled parking spaces, I had been assured that I would be allowed to park at the entrance at the top. In the hotel restaurant we could eat and enjoy ourselves. Our two girls had a nap in the bungalow.

The next morning we arrived at 7.30 am on the exhibition grounds. Everything was already fully parked by the many, many vans with the unspeakably many cages with dogs from the many, many handlers. These would dominate the entire exhibition, approx. 85% of the 500 registered dogs were shown by these handlers. A very sad and ugly side of the exhibition circus.

The weather was good. The rings for our breeds were outside. It was always the same ring for the 4th shows, only the judges changed. With the exhibition showmanagement it was organised that a doctor was present who could carry out the Corona Test PCR and rapid test on the 1st and 2nd day. Costs only 53 € per person. In Germany € 95 pp.

After seeing the catalog, it was relaxed for me. Only my two girls were registered. So very easy. Lilou and Sonja got their first 2 CACs in the morning. The time schedule was not really adhered to. So the first CAC show wasn’t finished at 2 p.m., but only around 3:30 p.m. Then there was a break till 17 o clock. We would have loved to go back to the hotel to rest. Our car was completely blocked by other car. No chance to get away. The 2nd CACIB Show was from 5 p.m. Sonja won the CAC and the CACIB and was finally an international champion. , Lilou got her 2nd CAC and the Res- CACIB behind Sonja, who was 2x BOB that day. In the main ring we were just statists. It all went to the handlers with sometimes really bad dogs. The judges came outside between judging to smoke there. Surrounded by a bunch  of handlers. Everybody acted like Corona was not a problem:  without a mouth mask, hands were shaken and in the cafeteria you sat comfortably together without any distance and without a mask. Corona did not exist in Bosnia. We just wondered and had to endure some very ugly rabble because we asked the Italian and French handlers to please keep a little distance.

Group 1 was judged around 8 p.m. and since we hadn’t won anything, we could have gone back to the hotel. However, our car would have had to be free for this. In fact, it took until 9:30 pm for the Best in Show to be judged and for most of the parked cars to drive away.

The hotel restaurant was only open until 9 p.m. to save us from hunger and thirst the only soloution was the  way to the next supermarket for wine, cheese, sausage and of course a slivovitz. That evening we sat comfortably in front of our bungalow with Sonja and Lilou and listened to a nightingale.

The next morning, again at 7.30 am at the show grounds, but this time parked so that we could drive away if it suited us.

The same program: First the PCR test in the morning, then the CAC show, this time Lilou BOB. The day before with 2 CACs it would have been enough to have the champion title “Bonsischer Federaler Champion” confirmed. That was too embarrassing and too easy for me, I wanted the 3 CAC’s for the title of Bosnian Champion. We won it  and at that moment  “Lilou” was the 160 champion in our breeding history.

After the main ring, where there was again nothing for us to get, we drove to the hotel. We rested and went to eat at 5 p.m. From 6 p.m. we were back on the premises. Many handlers had already left, they had probably won everything they needed. We had decided not to exhibit Sonja anymore for the 4th show. She had everything and now  Lilou’s chance to get the CACIB. At 7 p.m. there was the test result, everything was fine, the papers were on a table, visible to everyone ……

Lilou had a great graduation, she was placed 3rd in the honor ring in group 1 and we drove back to the hotel with a trophy. First I took a long walk with the girls (finally without the socks that they always have to wear to stay clean) on the premises. The bar was closed and so it was again a picnic in front of the bungalow with the singing of the nightingale. It was a mild 19 degrees that evening, during the day we had up to 28 degrees and pure sunshine.

The next morning at 9 o’clock we left Medugorje and treated ourselves to a great hotel by the sea in Optja/Croatia. We finally wanted to eat deliciously in the restaurant, but everything was fully booked. It was May 1st and the hotel was fully occupied. We didn’t feel like going into the city, there weren’t enough places until 9 p.m. There was an aperitif and a wonderful white wine on the terrace, as well as an antipasta platter. The girls enjoyed it too. It rained heavily at night and the next morning it was dry from above, but soaking wet on the street. Paul was allowed to stay in bed a little longer and I took a long walk with Sonja and Lilou to the beach in Rijka. afterwards they could dry on the carpet in the hotelroom, for 30 € per dog that should work. At 9 o’clock we left and had a proud 1196 km ahead of us. This time a different route than on the outward journey. We took the Tauern Autobahn to Salzburg, then via Munich, Stuttgart on the A 61 home. I was fit and drove the entire piece. To Jackerat/GER, 35 km before Maaseik, traffic jam !!! Burned out car, stood still for 30 minutes. We used the time to answer all emails etc. We were back in Maaseik around 10 p.m. Norman and Lasse were so happy about it and our girls first organized a race across our meadow.

It was an exciting adventure that cost about 400 € for Coronatest alone. It was the feeling of freedom back and I enjoyed it. But it was exhausting and I have to be grateful to my Paul that he made this adventure with me.

The outward journey: Alps near Graz 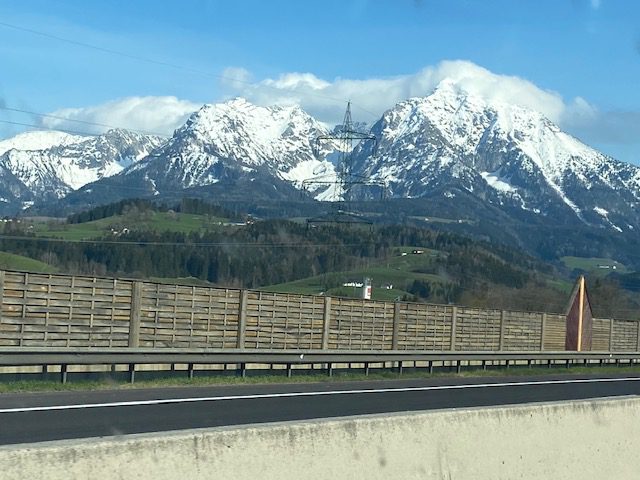 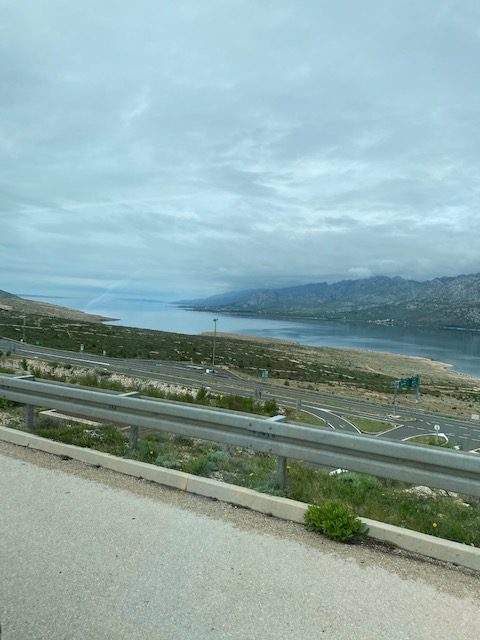 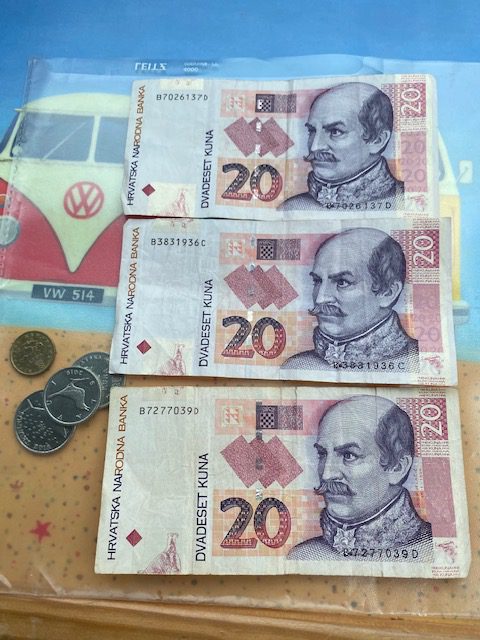 Our bungalow on the hotel complex in Medugorje 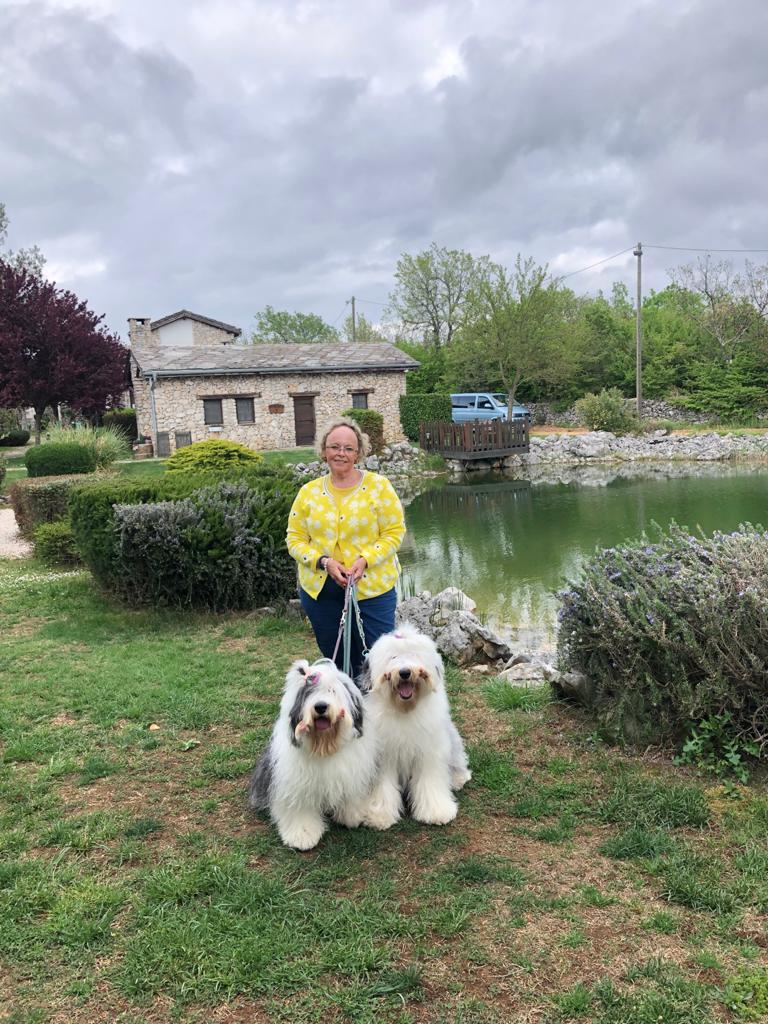 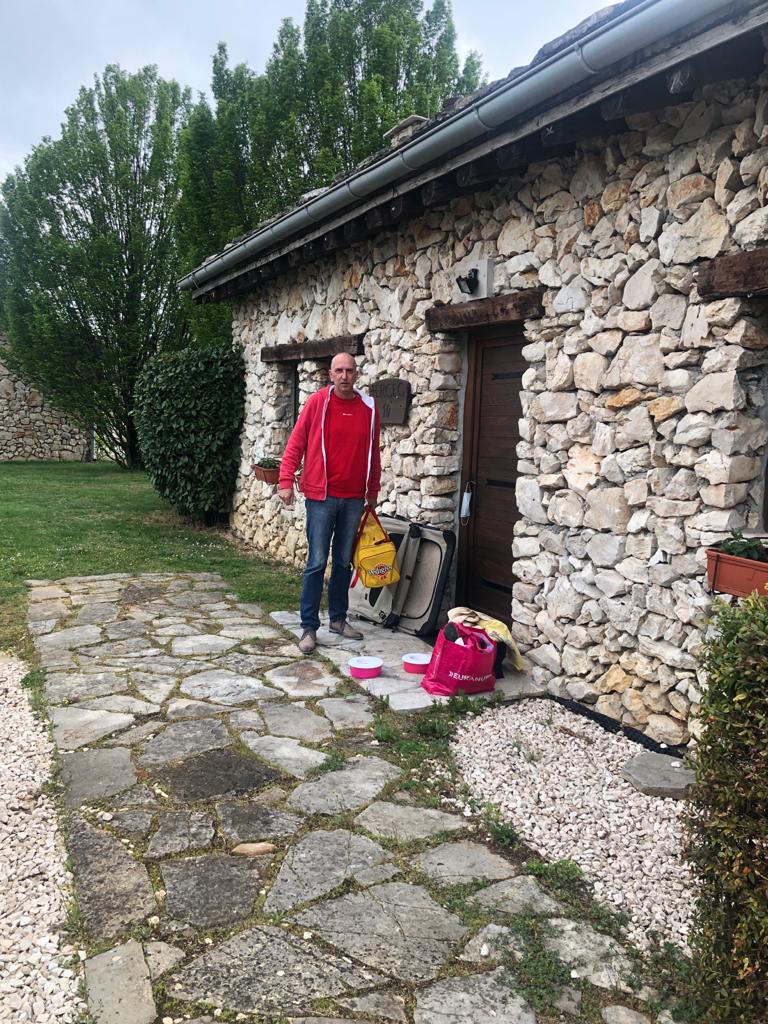 In the evening picnic in front of the bungalow. Paul always wears a hoodie up to 20 degrees. I sat across from him in a T-shirt .. 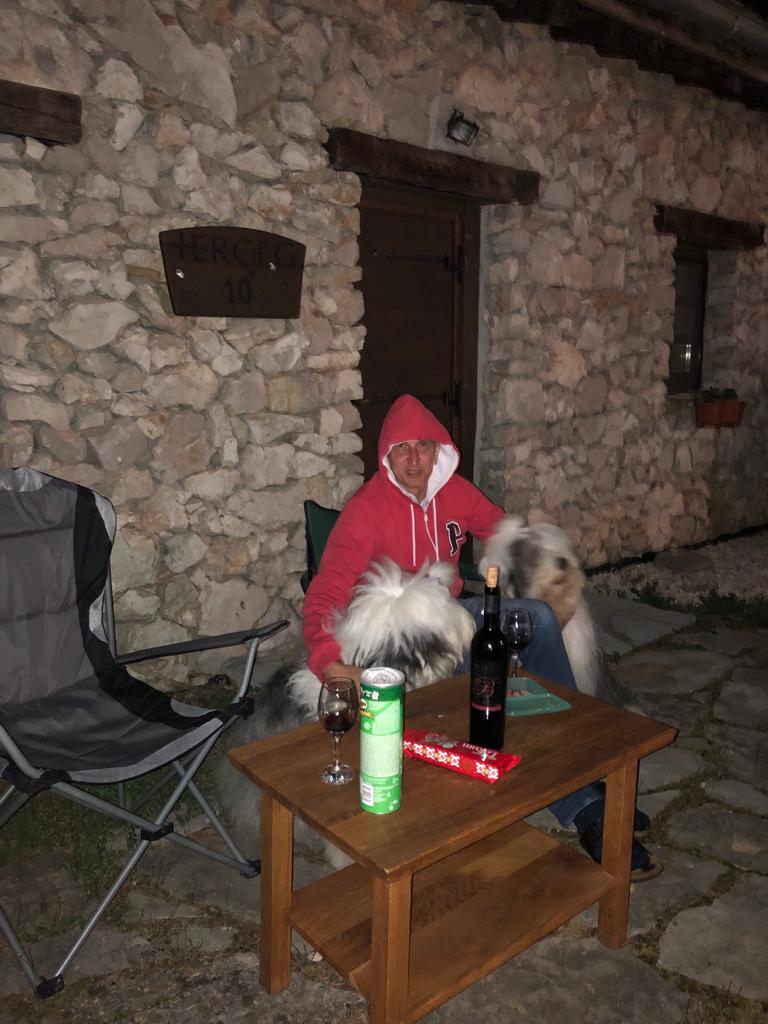 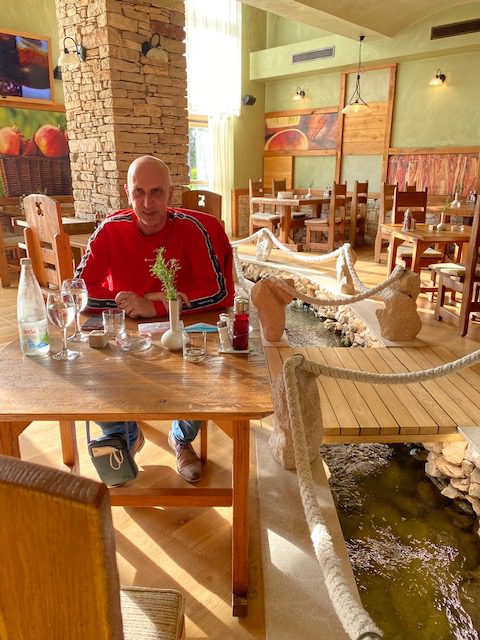 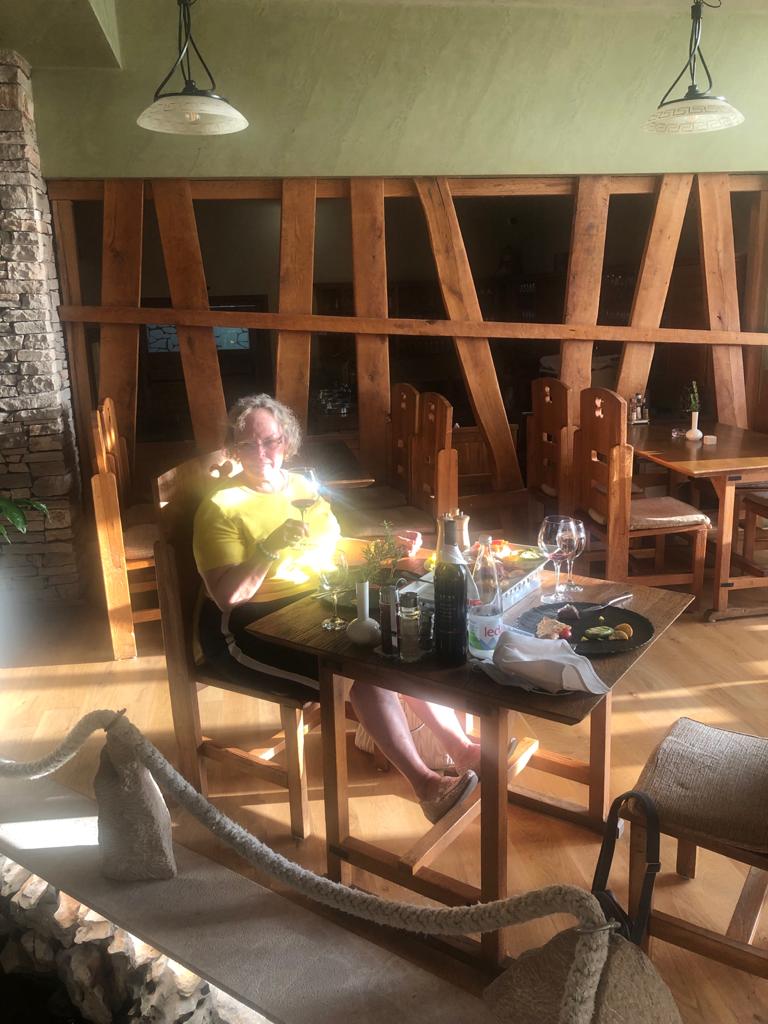 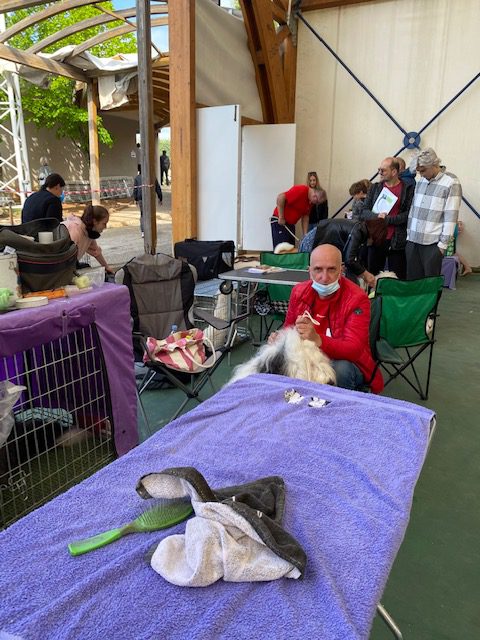 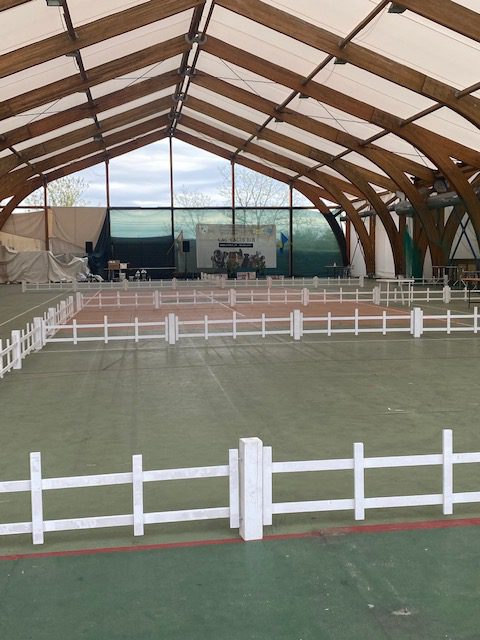 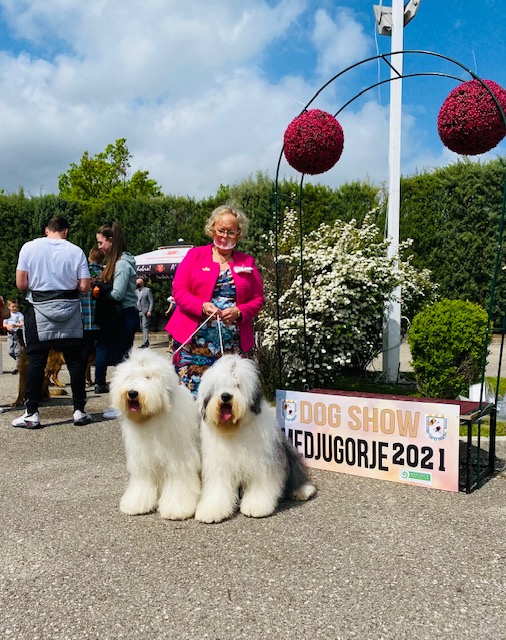 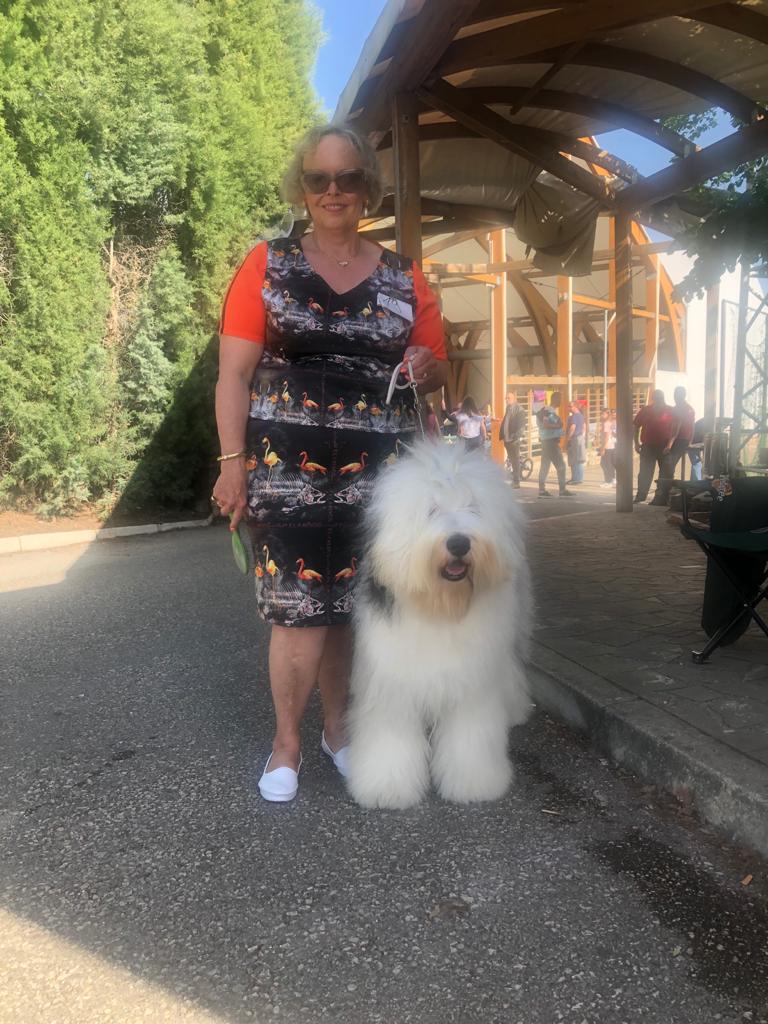 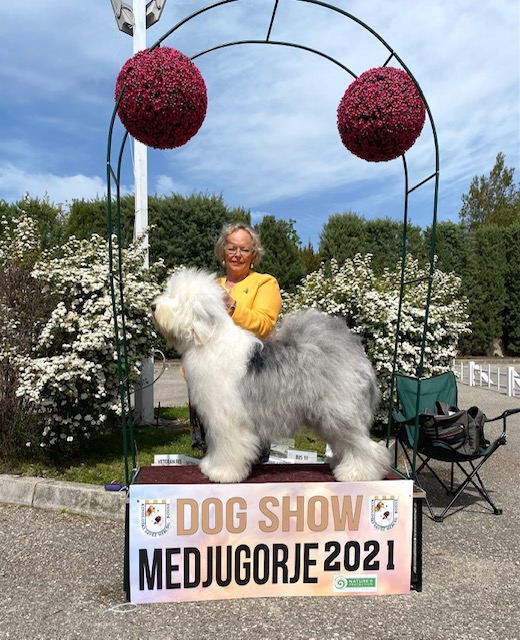 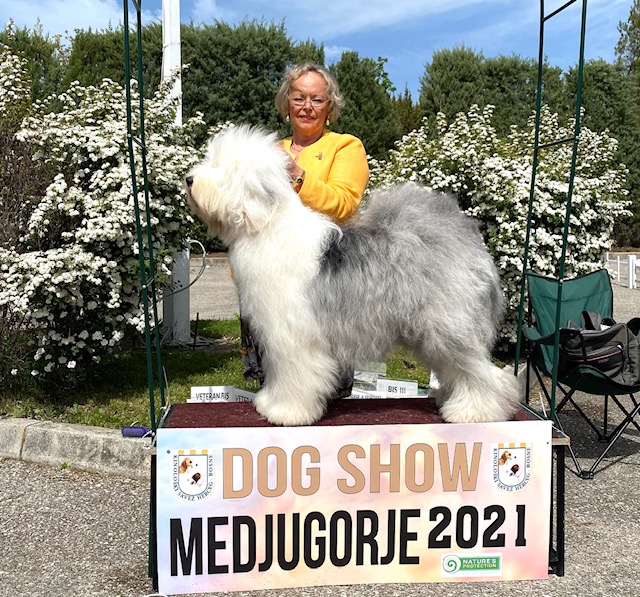 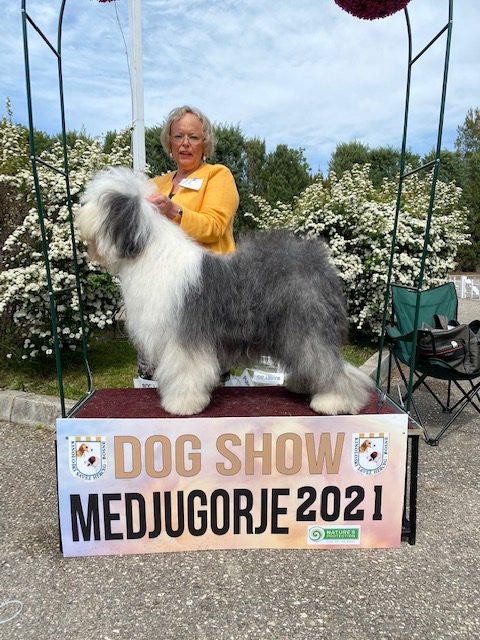 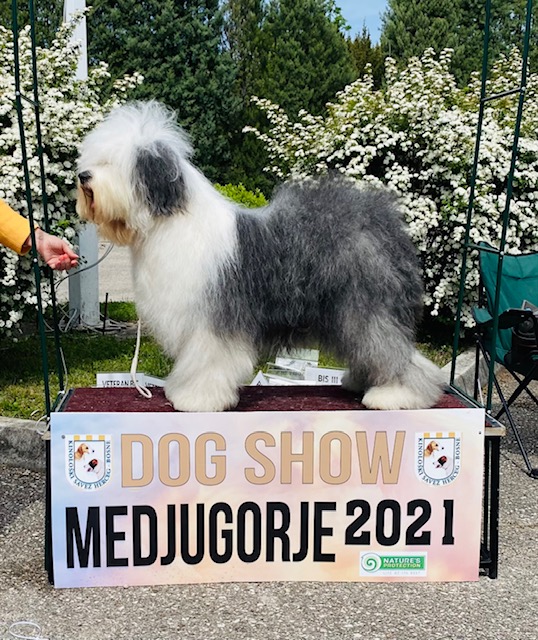 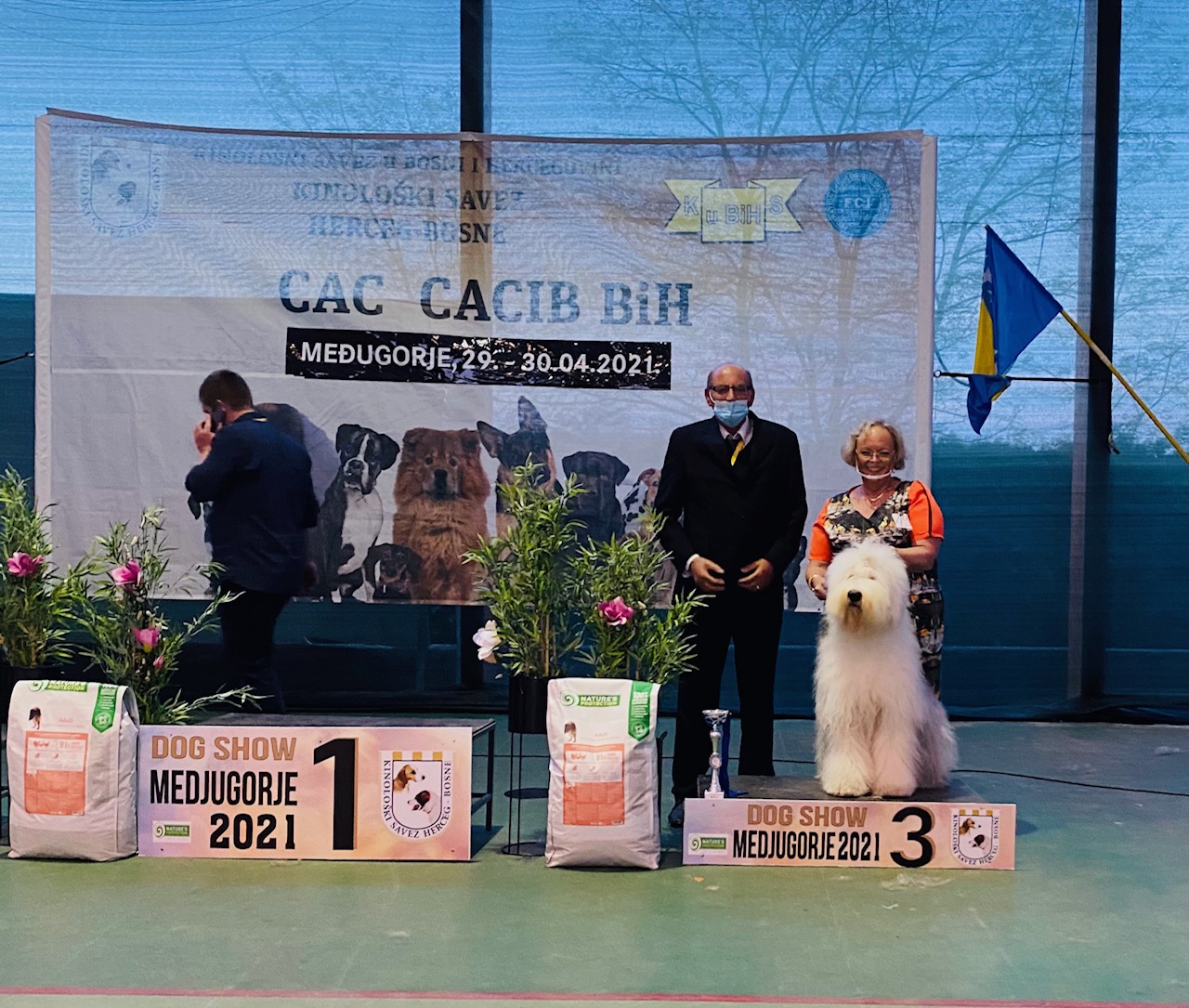 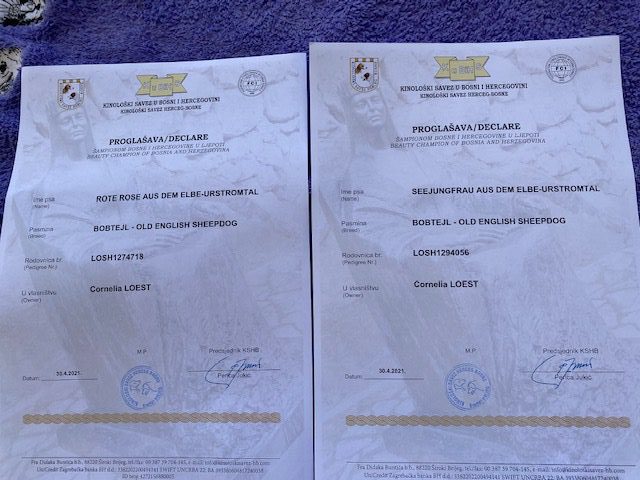 the view from the exhibition area to the mountains 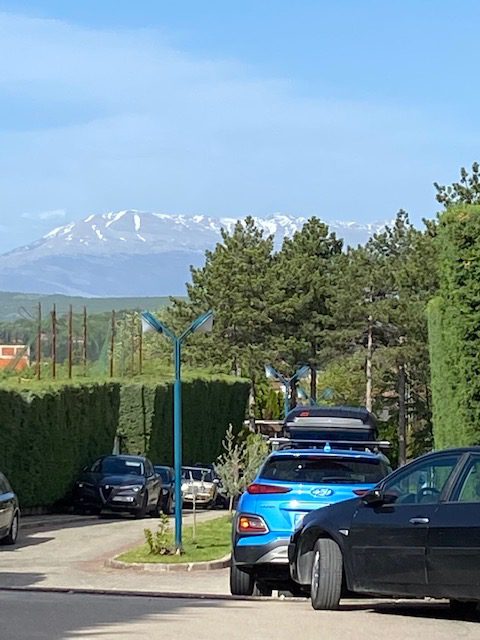 Opatja/Croatia on Saturday evening May 1st, 2021 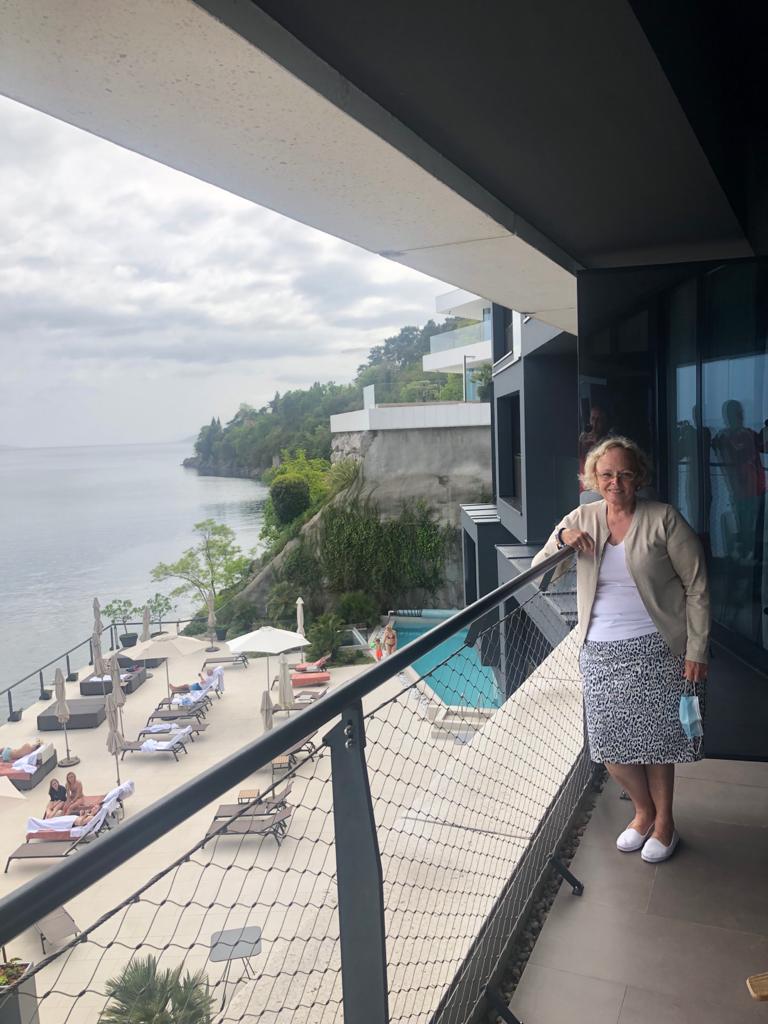 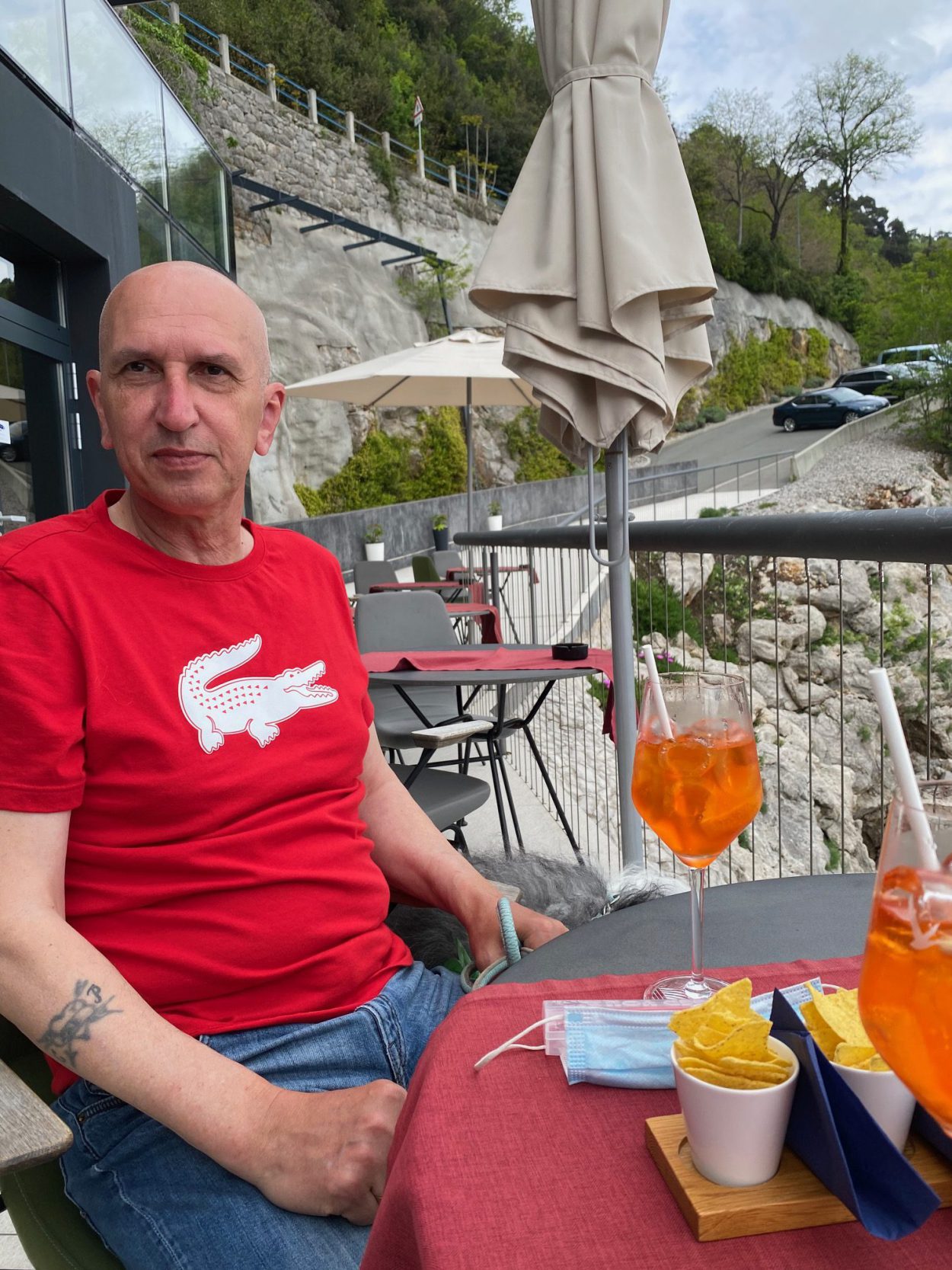 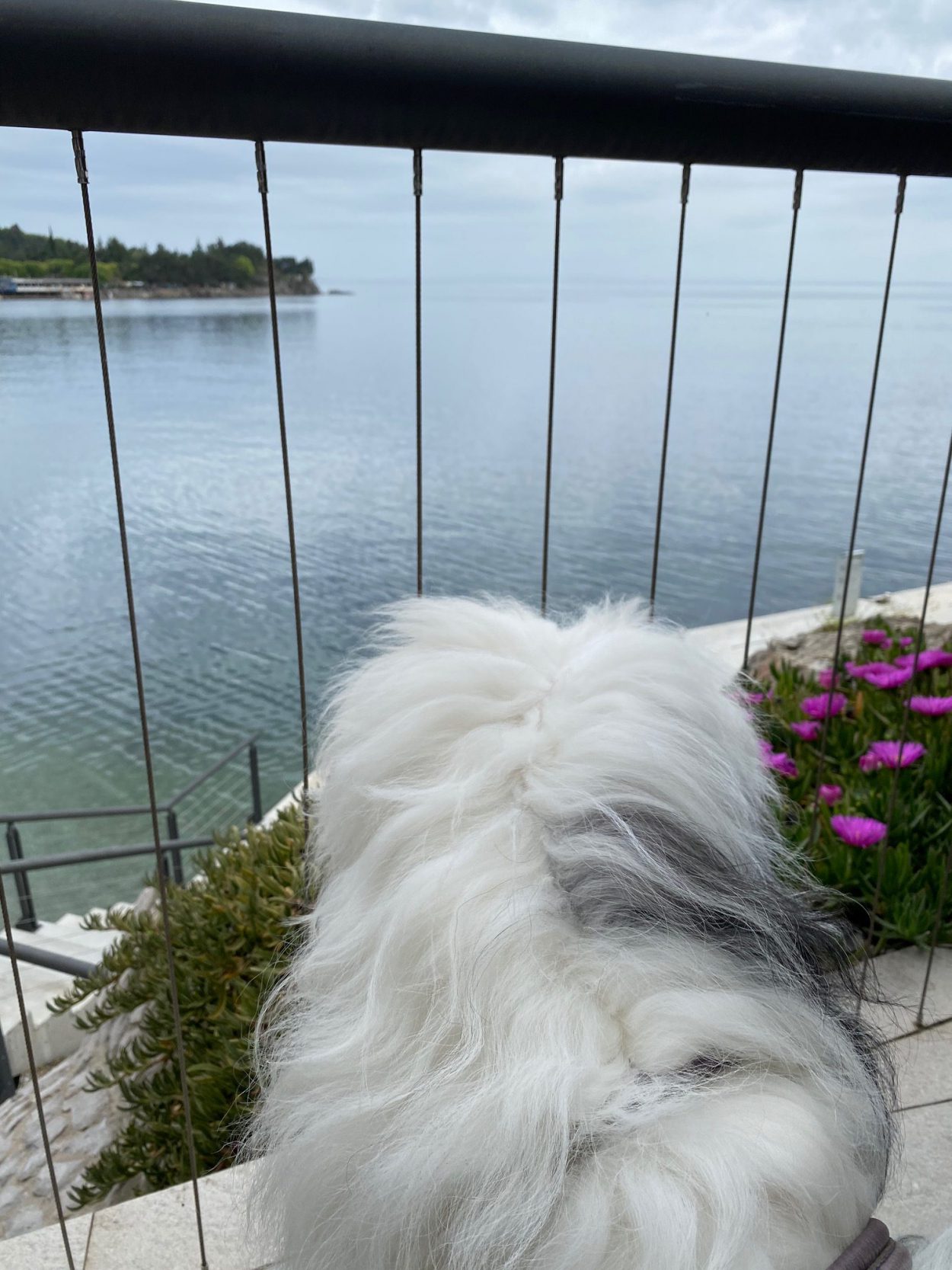 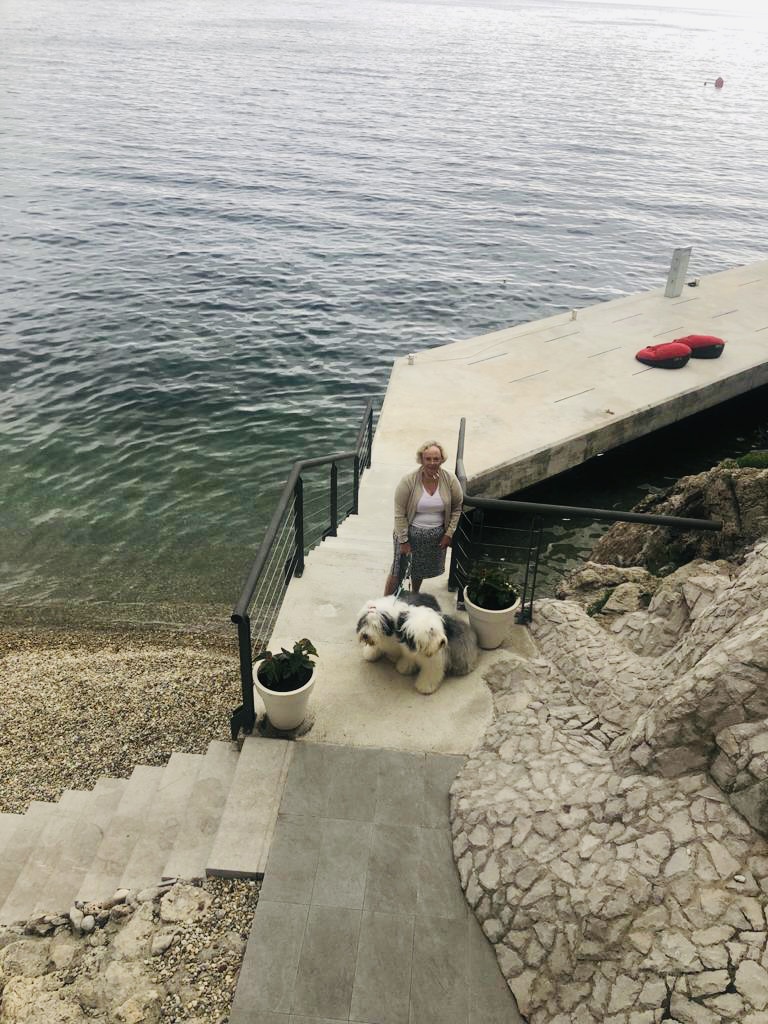 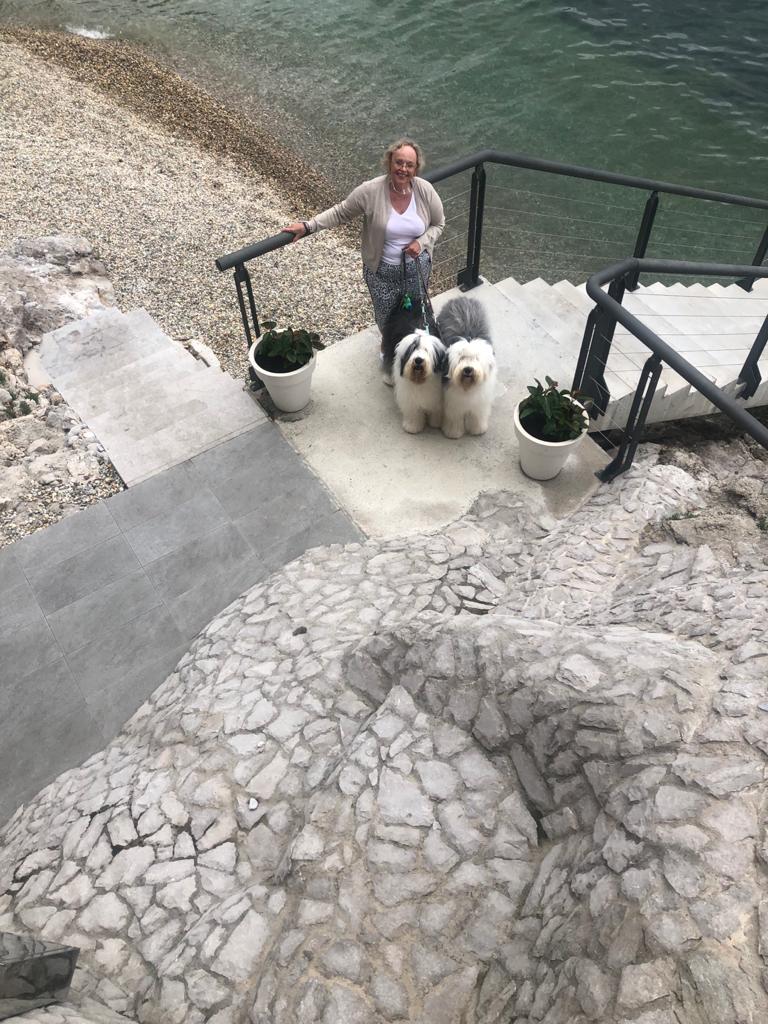 The dark side of the show circus ….. I really wonder who pays a lot of money to let their dog travel to exhibitions for days (sometimes 14 days at a time) under these circumstances? Of course there are some really good ones too, but … 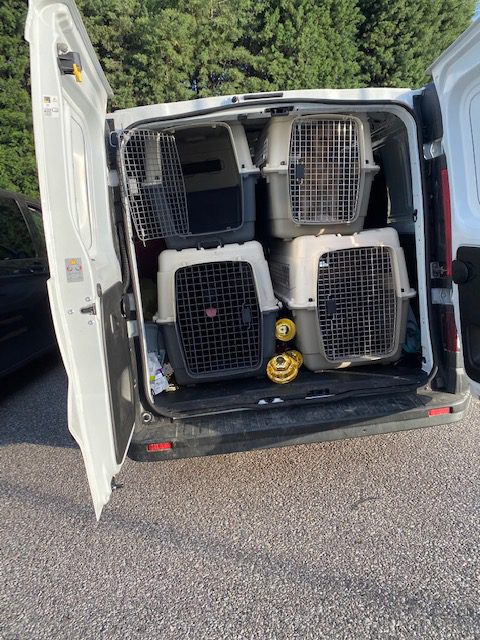 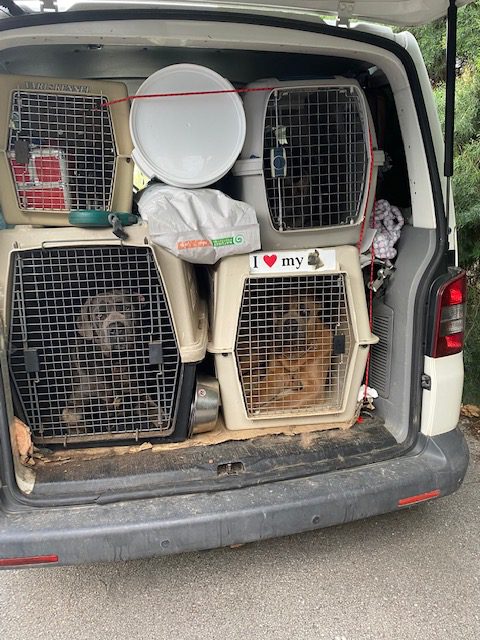 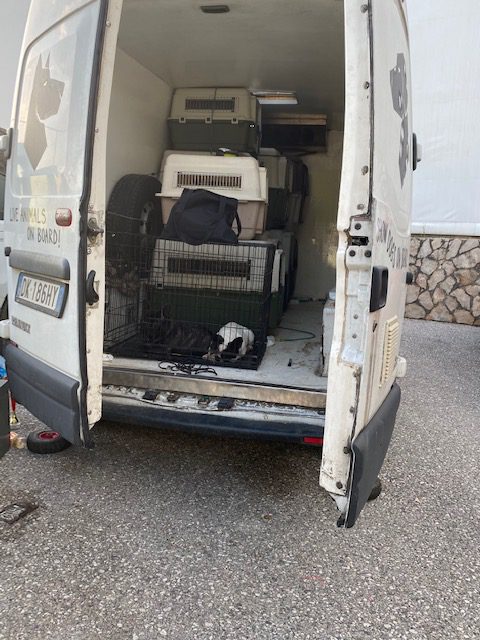 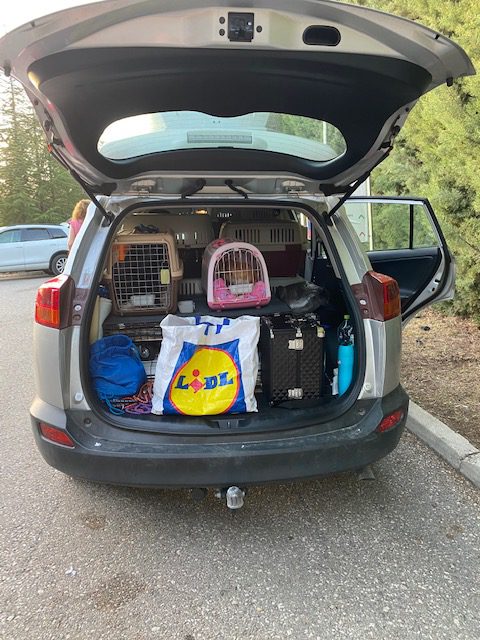 the fashion of the handler ladies: you wear something different to the CAC Show than to the CACIB. Say 4 outfits for 4 shows. 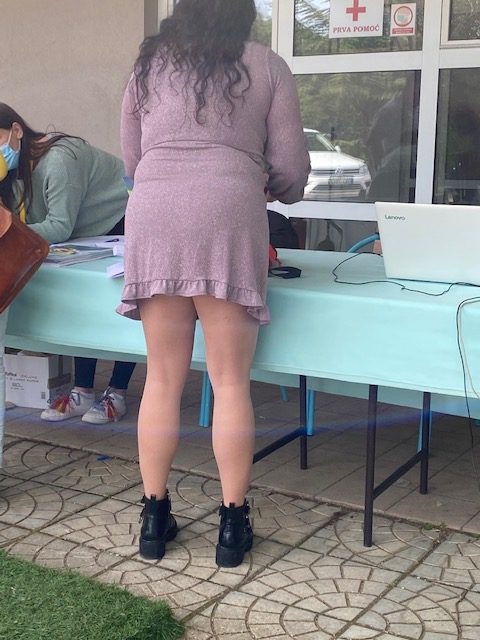 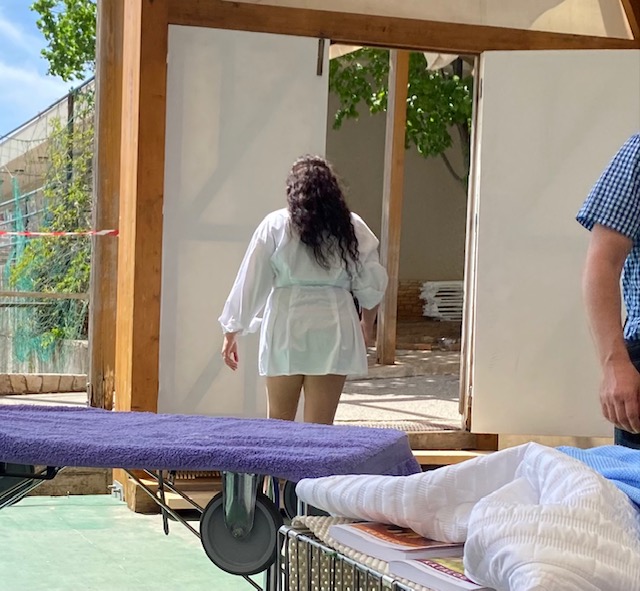