The second weekend of December was VERY successful for the Elbe-Urstromtal Kennel . The good thing: I’m sitting on the sofa at home and my phone makes “rrrrriiiinnnggg” and the reports with the successes come in. This is luxury for a breeder, you do not have to do anything yourself.

On 8-12-18 the IDS was in Kassel / GER. Judge was Mr. Uwe Nölke / GER. The open was occupied with 5 bitches, a total of 23 OES were entered. Mrs. Döreen Köpp has taken the long journey and showed  her “Prima Donna aus dem  Elbe-Urstromtal“. Best female with CACIB, CAC and the last ticket won for the title German and VDH Champion. This is the number 151 for the Elbe -Urstromtal History . Her sister “Pipa Middelton” is already champion. Both are children of Ch. Norman Harrison aus dem Elbe-Urstromtal and Ch. Aryakas Niki Elbestrumtal. 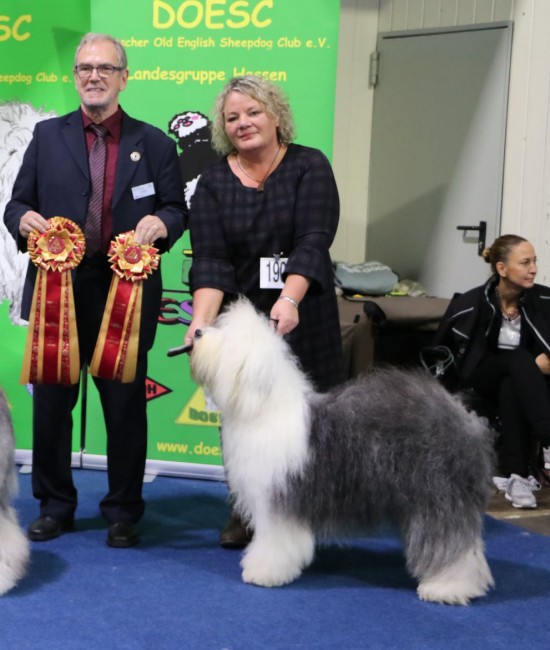 In Austria in Wels was also on this day an international show. It was judged by the well-known Norwegian Leif Herman Wilberg. “Ch. On Top aus dem  Elbe-Urstromtal” owner family Horschler won the champion class with Res-CACIB and CAC. He won his last CAC for the title Austrian Champion. The young bitch “Quadriga aus dem Elbe-Urstromtal” owner family Laminger won the intermediate class and received the Res-CACIB. She’s a younger sister to Prima Donna and Pipa Middelton.

On the Christmas show of the Danish OES Club on 9-12-18 Mrs. Ann Cuthbert from Ireland judged . Gesa Milde won the open class,  CAC with “Pulverfass aus dem Elbe-Urstromtal” and became 4th best male. in 2019 he could reach 3 titles ….. exciting.

Photo with thanks to Mrs. Birigt Schroer 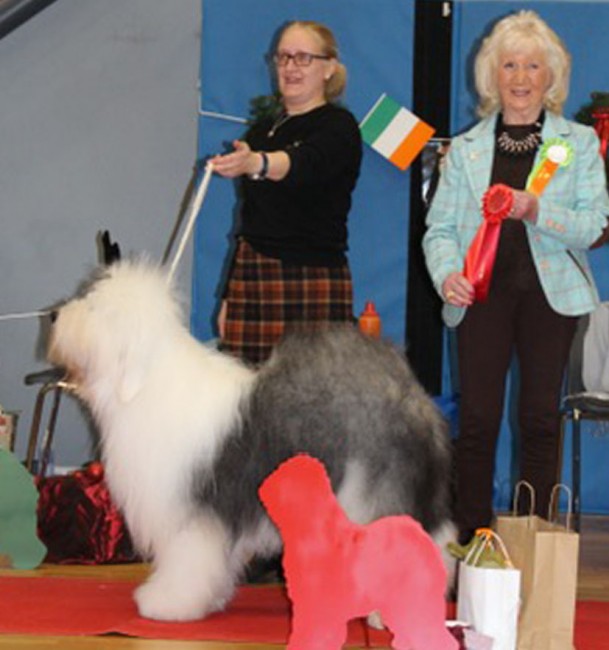 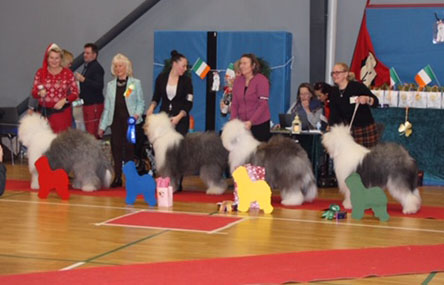 Obsession aus dem Elbe-Urstromtal, Owner. Dr. A. Hodgenson .”Martha” was very successful on the LKA in Birmingham 15-12-18. She won the Open Class and received the Res-CC. Judge was Mrs. S. Ruthland / GB. Photo with thanks to Janet Steel 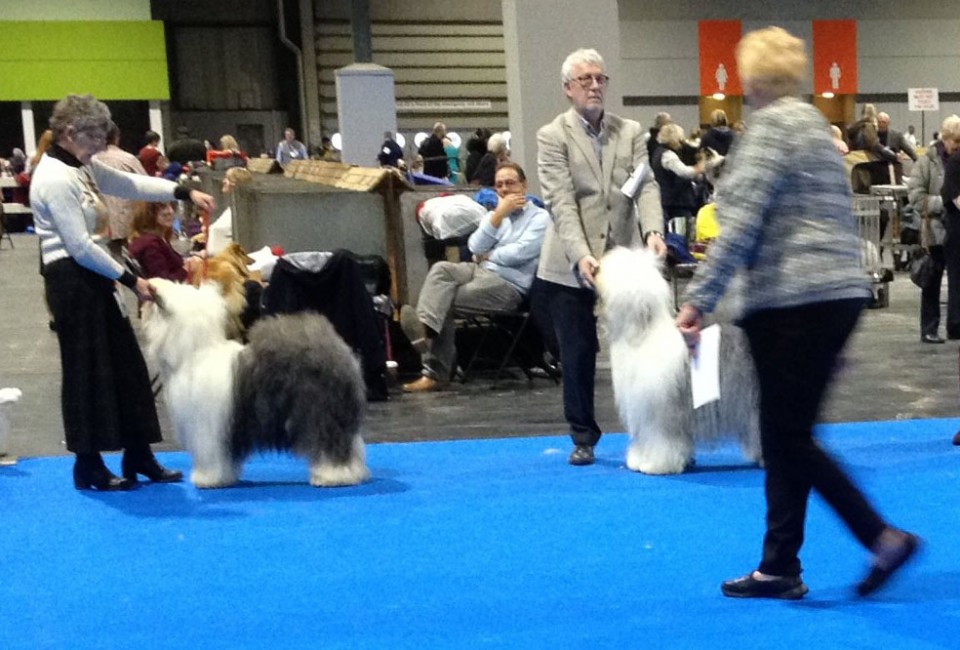 On Friday the 14.12.18 in Amsterdam was the Holland Cup. This is the pre-show in front of the Winner Amsterdam. Driving to Amsterdamin the morning  on Fridays and back in the evening is not funny. Traffi jam without end ….. But I could not leave it, although very tired because of Prada’s puppy. Then without a passenger, that’s already hardcore. 15 OES were registered for the young Hungarian Robert Kotlar.

Mr. Kotlar likes Sidney and gave her the CACIB, CAC and Best Bitch “Queensize from the Elbe-Urstomtal” 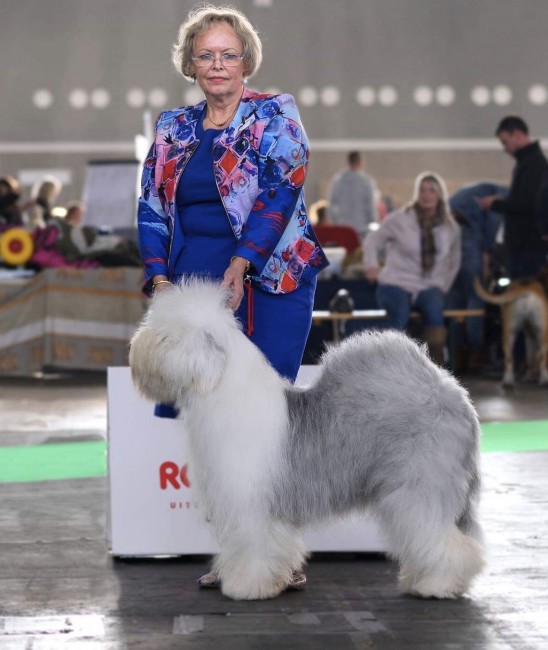 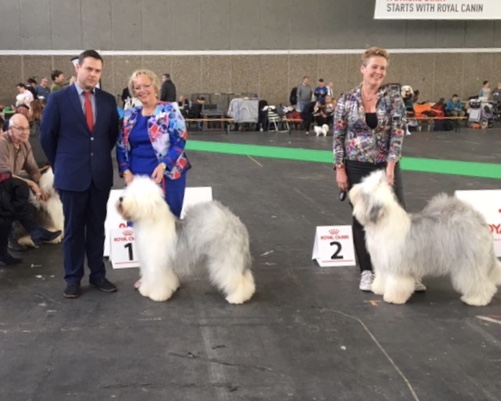 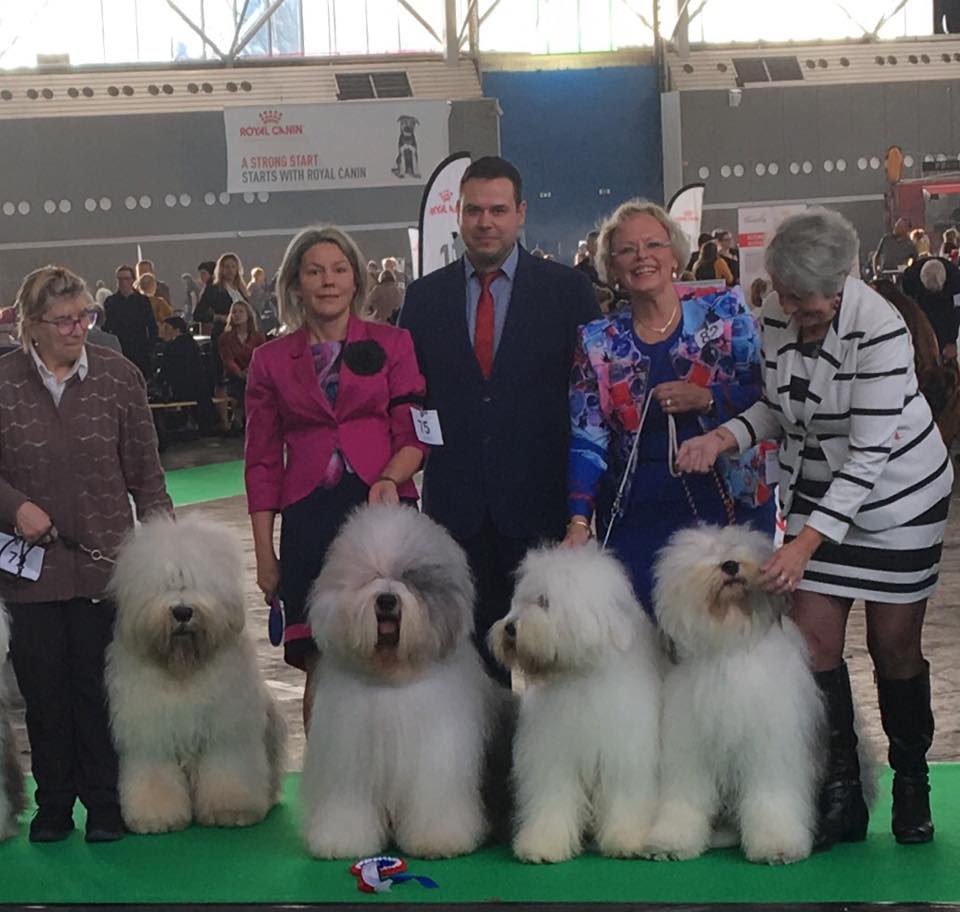 Sunday 16.12.2018 Winner Amsterdam. Judge Christina Bailey Breeder of the famous “Zottel’s” Old English Sheepdogs. 16 OES registered. Unfortunately, Dorota and Pavel had to go home. For that I had brought  “Norman”. He had an exhibition break since May 2018 and it was time he was shown again.

The Winner is NORMAN 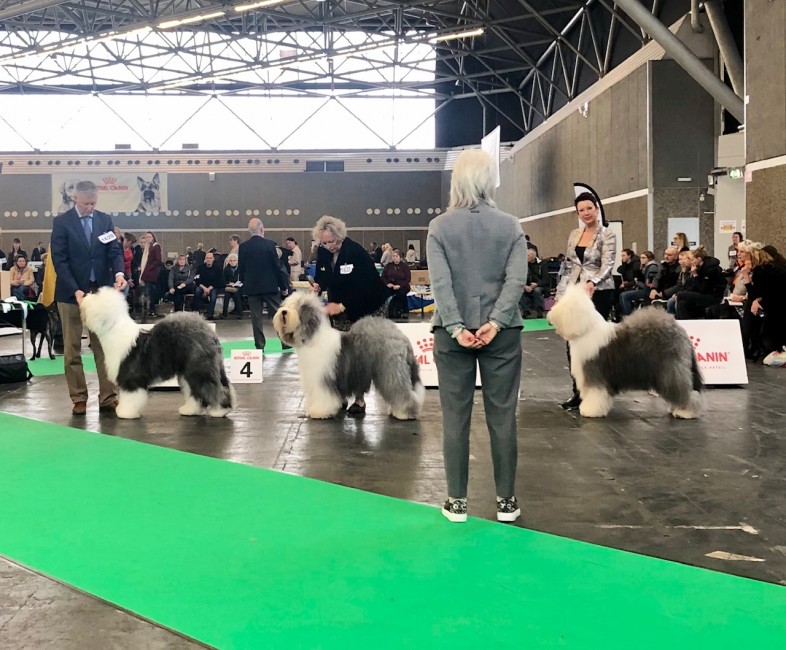 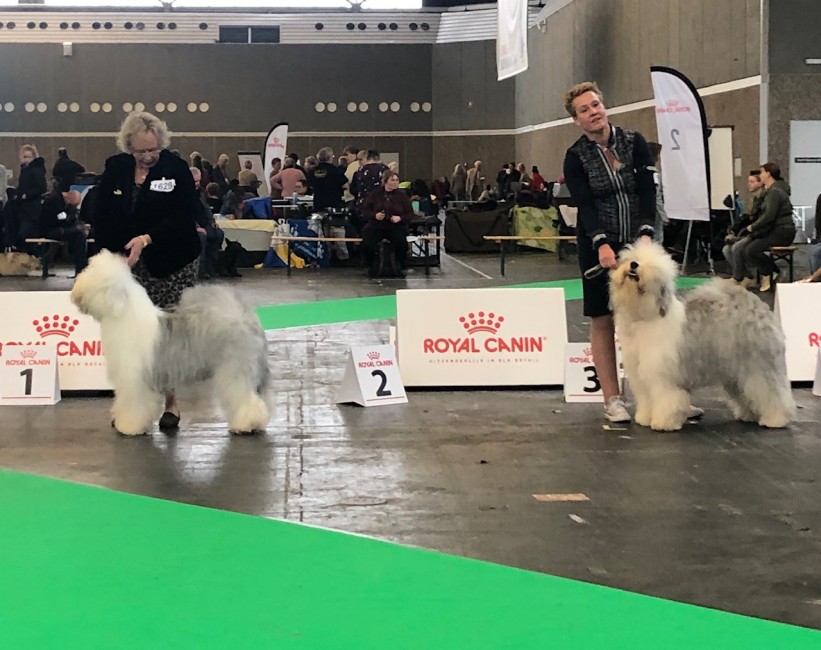 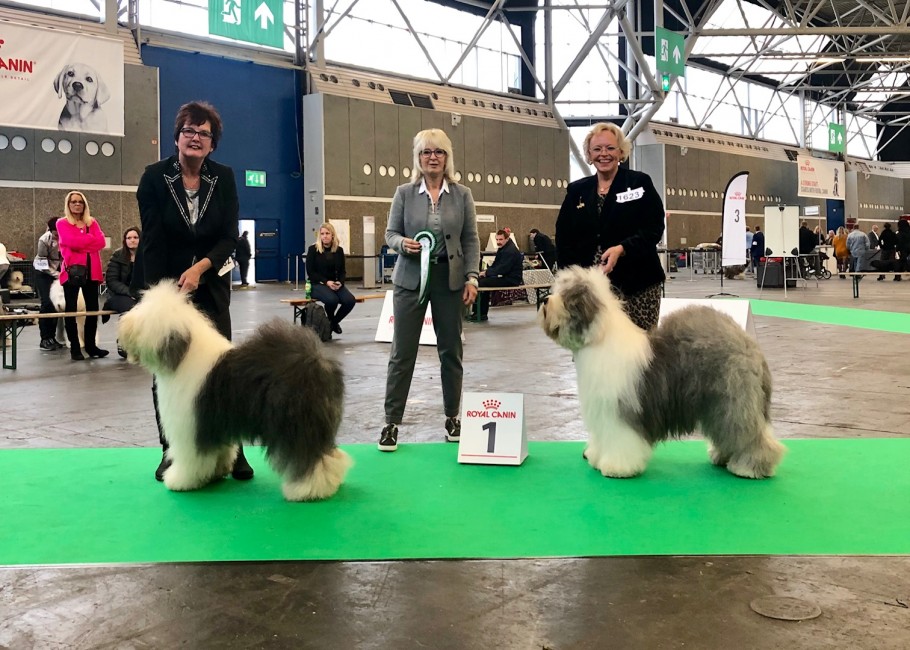 Breedjudge today was Mrs C. Bailey „zottel“ OES who wrote the most perfect judgesreport about Norman.

“4 years and 6 months, masculine and fully mature male of excellent make and shape, my

My dream dog and my soul dog “Norman” 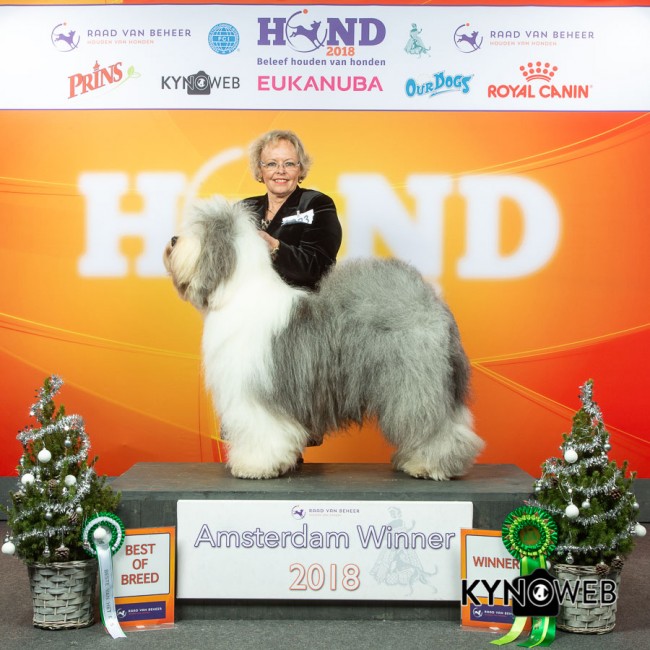 Norman came in the last 6 of Group 1, this time with 51 herding dogs stocked

The last show of the year is always Wychen. It used to be there, now it’s Venray / Nl but everyone still says Wychen’s Christmas show. Mrs Anita Gielisse from the Netherlandsjudged the  8 registered OES on 22.12.2018. She herself is a famous Borzoi breeder, who also regularly shows her dogs very successfully. In my opinion, it is the first time she is judging our breed . For us, this show was the culmination of a very successful show year.

Q’Anna Anka from the Elbe-Urstromtal, just  17 months old, wins the CACIB, CAC is Best of Breed. 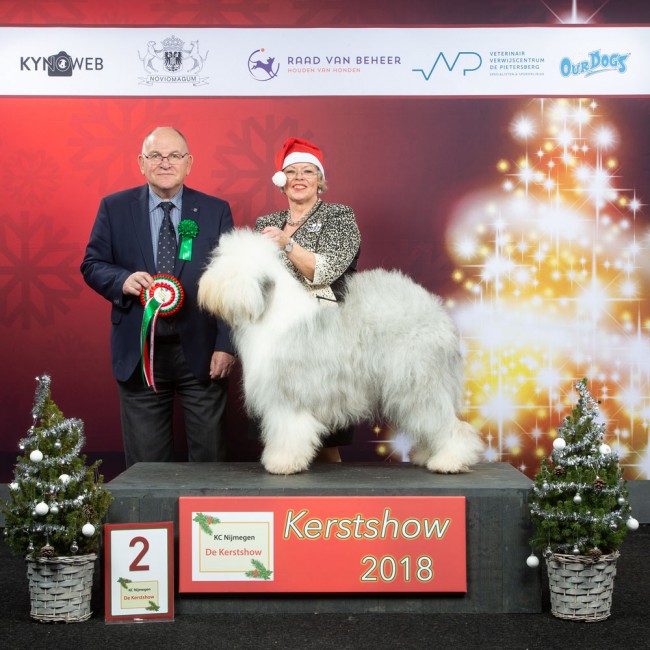