Our puppies had an exciting week.  For the first time in their life, they had raw meat and where outside. A large adventure that they have mastered with braveness. Slowly, but certain the puppies are showing their real characters they are going to have when grown: Macho, curious, softly or dreamer. Every puppy has its own nature and now it is the art to make sure that every family gets a puppy that is best fitting into that family. It is my task, as breeder, to advice the people in choosing the right dog. No one is helped with a puppy been bought just because of its marking or I do not know what. An alpha male should of course not go to a family who are having the first dog in their life. Than trouble is being programmed. After 40 years, I can easily see what dog suits the most. With this concept we have been able to bring the right puppy to the new owners and making a happy match.

This was our week:

For the first time outside through the hatch into the puppy run, where mama Socke is waiting with Milkshakes. 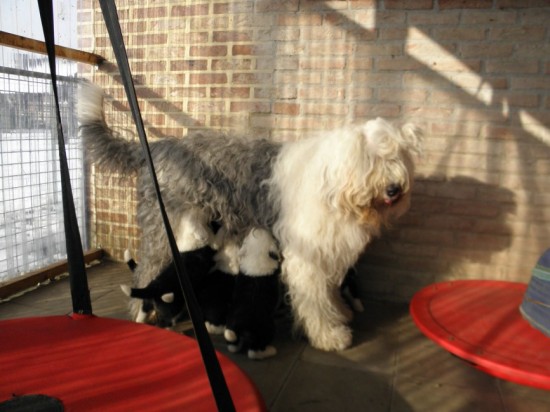 Quite exciting this large strange world. Mama Socke ran of after dinner. 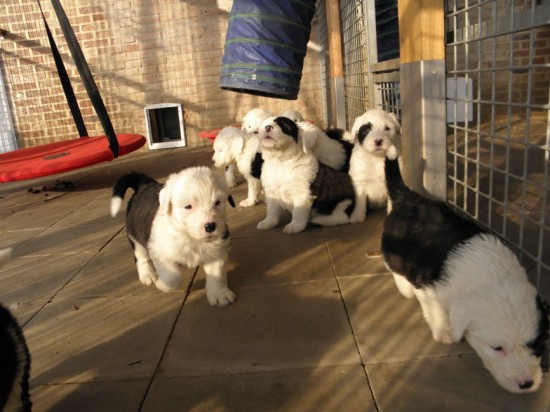 Such a new underground feels terribly dangerous and it is better to lay down, just in case. 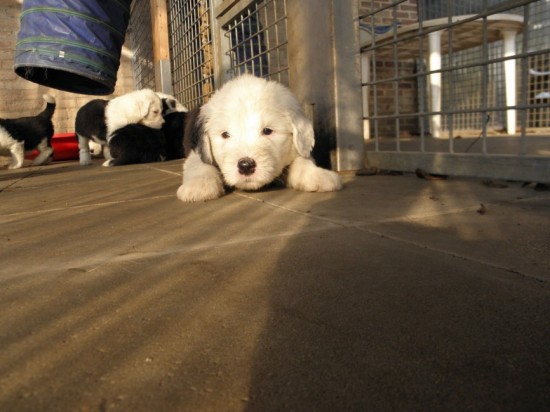 Inside it is much safer. Here they know the different types of undergrounds and the difference between a slippery floor and newspapers, on which you can pee. By the way is it more exciting to help the breeder when sweeping and cleaning the floor. 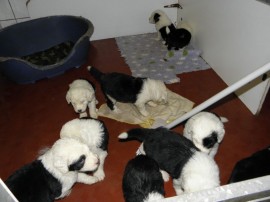 After done works they get something to eat. The first time there was minced meat for Puppies, of course raw. It is indeed of great importance to adjust it to the natural needs of the puppies. Normally a bitch would catch an animal in nature, eat it and throw it up in the hole where the puppies stay. We humans might think this is disgusting, but for a dog it is the most common case in the world. Our Socke does not throw up, she eats it all for herself. To not aggravate the small stomachs of the puppies with raw meat, we shortly heated it in the microwave to a body temperature of 38 degrees. That means the temperature, as shortly before eaten by the bitch. 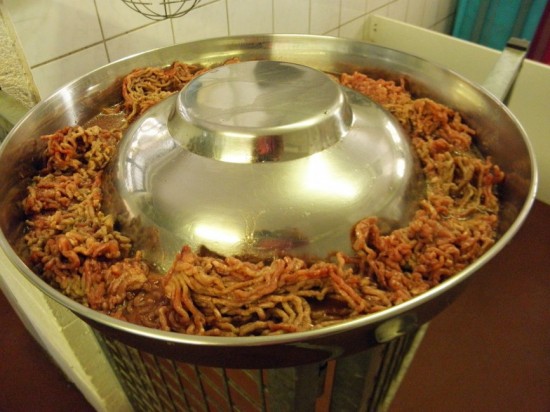 It just takes moments and the bowl is empty. 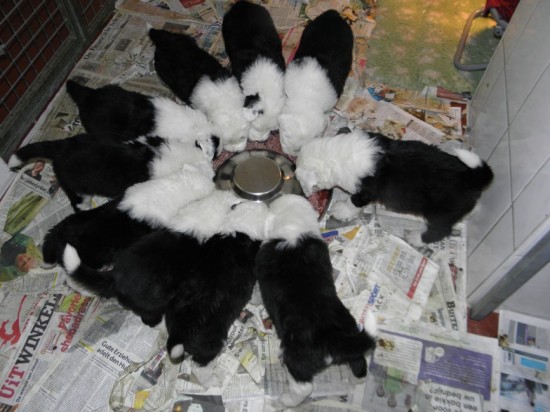 afterwards they do their afternoon nap. 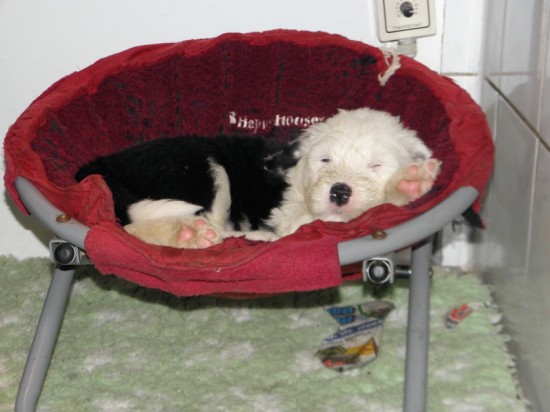 As soon as they finished sleeping, it was by the time and they had a visit. The Christ family was also helpful in the making of the pictures. But first cleaning, so they look good on the photo. 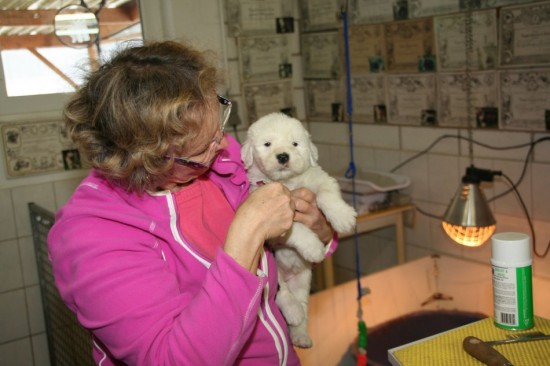 From the face of Mrs. Christ it could be seen by that she was sightly amused  in helping me with the work. The person behind the camera was Mr. Christ. 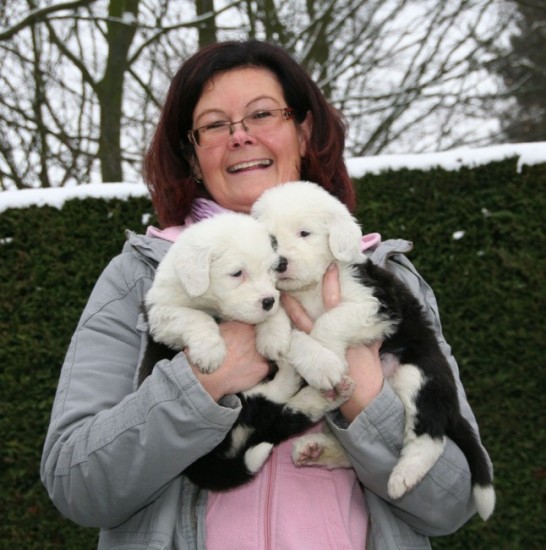 Daughter Christ was also here and planned in to help. 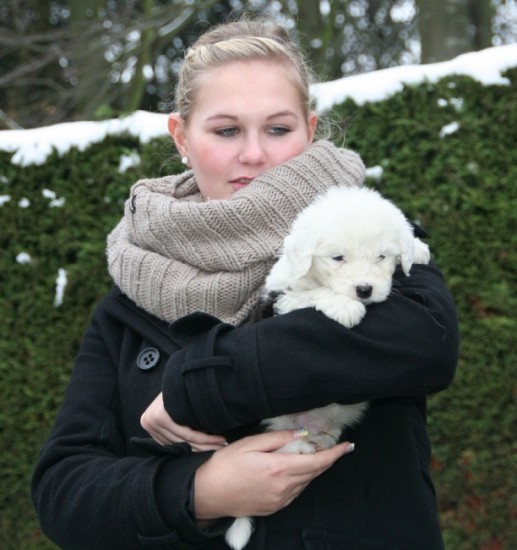 The Regie was in my hands and here the last instructions are given…. 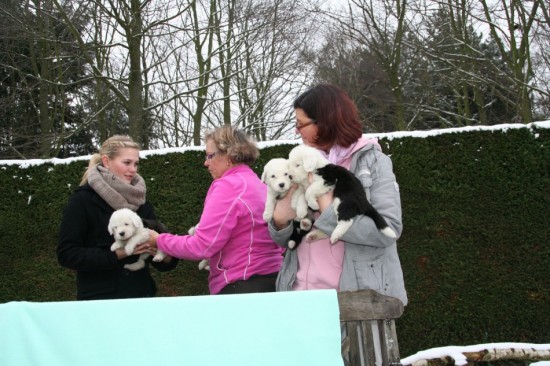 ready for the first “Glamour Photo” with almost 5 weeks. The 3 males with the black markings on their heads: 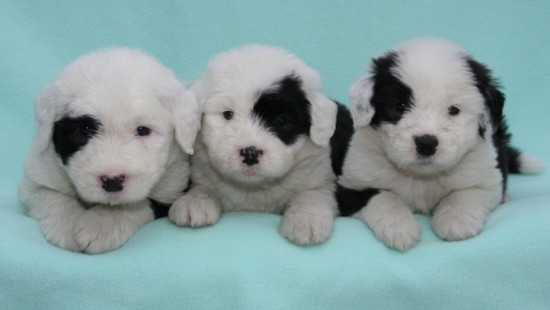 Lets Dance(booked), Lancelot, Let it be and Lets Go(booked), the other 4 males. 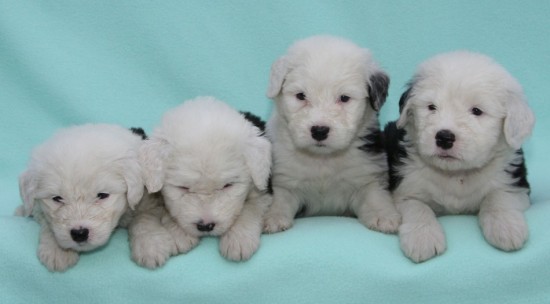 the ladies acted a little like tarts and just didn’t want to be in front of the camera, Girlpower! 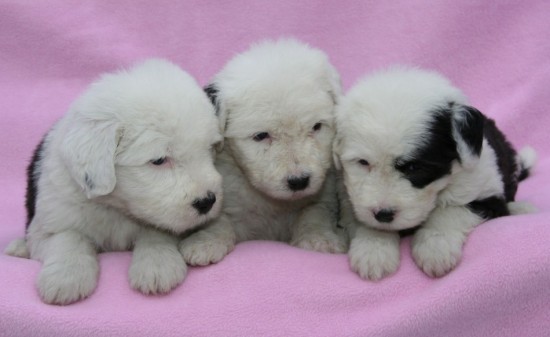