From Chris and Noel Ferrson we receiced the following sad message, that they had to let go their beloved “Borsa” (Ch. Borsalino aus dem Elbe-Urstromal).

Sometimes they say: One of a thousand. That was Borsalino for sure, never had a bad day, always happy. I know we had to let more dogs go, but Borsalino has always been special to us.
Therefore he recieved some extra goodies the last couple of days. Chris cooked 2x per day specially for him and on Sunday he got french fries with hamburger. You should have seen how tasty he ate with us. In his head he was clear, but the rest didn’t do along and he suffered a lot of pain and could hardly walk with his rear legs. We have helped him getting up for months.
On Monday morning when we had to let him go, he was laying with his head on my lap. Just before he left he lifted his head and gave me his last kiss. At that moment I broke down and Chris had to take over. He loss will never be made up. OMG, do I miss my friend…..

greetings and 1000x thanks again for Borsalino.
Noel

Borsalino as puppy with Christiane and another Bobtail. 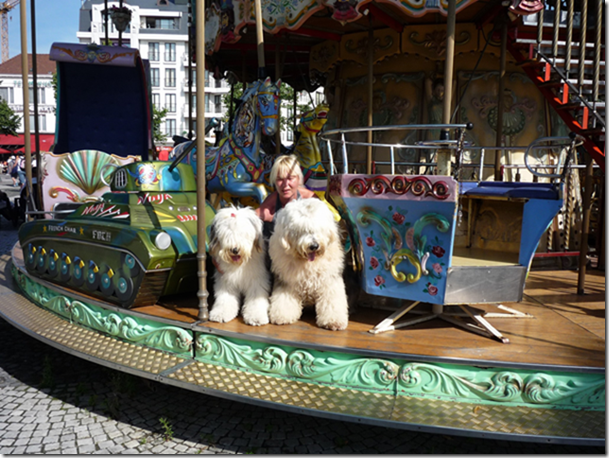 Borsaline was spoiled during his last days

In 2005, at a Show With Christiane Mertens