For the year 2001 the FCI European Dog Show was given to Israel. Two CACIB-Shows were planned. Invited to judge the Bobtails were Mrs E. Mosimann from Switzerland and Mrs. S. Kirschbichler from Austria. We booked our flights at the beginning of October, but only to Eliat, since Tel Aviv was already fully booked. We entered the two dogs, Y’Lookalike aus dem Elbe-Urstromtal and a Bearded Collie, Firstprizebears Vancouver. But as quite often is the case, things developed much differently than planned.

Political developments escalated and many exhibitors and judges cancelled their plans for these shows. The shows were rescheduled from two separate shows to one with two titles. Another problem came up when Crufts got postponed. We had dogs entered in England and according the pet travel scheme would no longer be able to enter the dogs after they had been in Israel. Our friend Jossi Guy in Israel arranged that we could change the dogs entered and now we travelled with Ch. Firstprizebears Y-Quentin from family Grambow and Yet­setter aus dem Elbe-Urstromtal from family Gelueck/NL. I was accompanied by Peter Spies with his Ch. X’McLaren aus dem Elbe-Urstromtal (Mika).

Everything was nicely settled, so I thought. No way! Transavia Airline takes only two dogs per flight on board. I was lucky to find an American Staffordshire Terrier breeder, who, on his flight from Brussels to Tel Aviv was willing to take Quentin with him. Yossi was able to pick him up. Wednesday morning at about 11:30 we finally arrived at Amsterdam airport, one and a half hours late with 20 kg of excess baggage (2 cages, 2 trolleys, 1 grooming table, 3 suitcases and 2 bags with 5 kg of potato flour!). At the gate we watched and saw Mika and Yetsetter in their boxes waiting to be loaded. We were relieved when we saw them disappear into the plane. At 2:15 p.m. we left Amsterdam. The outside temperature was 8° C. When we arrived in Eliat it was 7:45 p.m. local time and the temperature outside was 30° C. A car with trailer was waiting there to pick us up. After a 400 km ride through the dark desert we finally arrived at Yossi’s house at 1:00 in the morning. 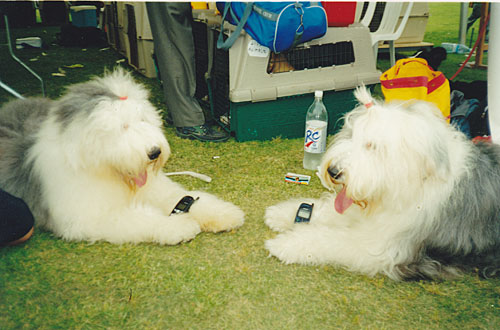 On Thursday we recovered and asked Yossi many questions about the political situation in Israel. That night his neighbors invited us over so that we could join the Sabbath ceremony. We had the absolute best couscous in the world – a memorable experience. The next day we washed and brushed our dogs and Yossi’s two dogs. Saturday was on to the show grounds in Ziporeck. The “crazy” Great Dane woman with her 10 Great Danes was already there and had reserved a place for us in the air conditioned hall. As the rings were outside, this saved us from the 28° ­– 30°C temperature. All together there were 1250 dogs, 10 Bobtails with one from Greece, 3 from Russia entered in the Champion classes, our two and two from Yossi. The rest were from Israel, some of which were bred in Europe. Judging started at around 1:30 in the afternoon with Mr. Pollet from Belgium judging the Bobtails.

At 4:00 p.m. we moved over to the honor ring were we could hardly find any room. Fifteen meters away was the secretary’s office, which was empty (except for a camera team) and it was air conditioned. There was a refrigerator with ice cream and cold drinks which we helped ourselves to. We almost missed our competition, raced in the ring at the last minute and achieved a 2nd place from 14 in the breeders group. The judge (Mr. Staunskjær from DK) was very astonished to see us with four OES in Israel.

Again we had to wait for the group competition and the judge was still unknown. Peter had had enough, so I had to show Mika who in the end won Group 1 (M. Pollet/B). I could hardly hold back my tears of joy. Once more we waited, thsi time for the BIS competition planned for 8:00 p.m. that night. It was was won by a Kerry Blue Terrier from Russia. BIS judge was Mrs. Gan Ami/Israel.
Peter, Yossi and I intended to end the day with champagne but we were all so tired that we wanted nothing more than to go to bed.

After a good Sunday morning breakfast we had to pack for a specialty show scheduled for 4:00 p.m. in Tel Monde near Tel Aviv. The show was quickly organised by Yossi for 12 breeds. The judge was Avi Marschak/Israel. Mika was already Israel champion, so we decide not to show him and give the lady from Russia a chance to win. The show ground was in the middle of an orange grove with a beautiful lawn, something very precious in Israel. The Russian dog got his CAC and Yetsetter too, who later went on to BOB. Also Quentin got BOB and Peter had to go in the honor ring with short pants and sandals. Quentin was 3rd BIS and Yetsetter BIS. This time our dinner in an Arabian restaurant was not very late. On Monday we could relax and shop and met interesting people from all over the world. On Tuesday we had a short trip to the beach and Yossi cooked a beautiful curry dinner and Eliea, she has Pyraeneen Mountain Dogs, came with her daughter to spend the last night with us. It was the night before Independence Day and so we went to another party. Then packing had to start.

The next morning Micheal from Jerusalem was supposed to come to pick us up. Who in the world is crazy enough to drive 800 km back and forth and another 100 km to Jerusalem? But that’s something unique and special in the Israelis. Micheal arrived at 7:00 o’clock about 30 minutes late. We had a 20 minutes delay in Meneshe Rasah  due to a celebration. It was getting  later and later. Our plane was scheduled to take off at 1:45 p.m. and at 1:10 p.m. we finally arrived at the airport. Checking-in seemed to take forever. I took care of Mika and Yetsetter while Peter hurried to assemble the cages. It was empty in the terminal and we had to find the ground staff and explain that we were to take off in 20 minutes. The ladies at security control were excited about our dogs and had to take pictures first. I friendly asked if we can continue with the security check which would be a little problematic. I have a German passport, a Dutch drivers license and live in Belgium. Then there was still my old Dutch address on the suitcase with my former name Abbicht.

The flight attendees had already come down the gangway and waited for us. All other passengers had already boarded. But they had to wait a little longer because it was forgotten to make copies of the dog’s vaccination passes. At the end the pilot arrived at the runway and we all could do nothing but laugh. At last we all were on our flight to Amsterdam. Peter and I agreed that even after all these experiences it was a great trip!