Last year August, I had already booked the hotel, for the World Show in Milan Italy, who was held on the weekend of 12 to 14 June 2015. At the moment of making this reservation, most of the hotels in Milan were already completely full, due to the fact that simoultaneously at this weekend the EXPO was held. The still available rooms could be rented for 500 euro or more per night. I wanted to stay 4 nights……. Our good friends Fernando and Sergio, who are both living in Como, had the solution. A hotel, close to the highway, with lots of green for the dogs. The Milan Exhibition Halls where on only 35 Km away and 3 nights for the hotel where 450 euro. Fernando has a dog salon, just 3 minutes away form the hotel and we had been invited to come to his salon to wash and blow-dry our Dogs here. This planning was made in August 2014. 19.000 dogs from all over the world ere entered at this Show. At a World Show in Italy you expect chaos. Everything turned out to be different: one of the best World Exhibitions, I have ever participated in. Such enormous events always need a long preparation and planning. Last year I had the idea to travel with 2 dogs, being King and our Bearded Collie bitch Prada. There were interesting judges at this World Show.
Mister Christopher Habig from Germany would judge the Bobtails and the Brit Mr. Ron Irving the Bearded Collies. Mr. Irving has always placed “Prada’s” mother Firstprizebears Helen Hunt very well. She won Amsterdam under him and one year later she became World Winner in Salzburg/Austria. By the time our “Senta” (No Limits aus dem Elbe-Urstromtal) became more and more beautiful, so she was entered for this Show as well. Now there where all of a sudden 3 dogs……. It went as it had to go, brother “Norman” also wanted to joy and therefore I decided to leave King behind and fully concentrate on our teenagers. I had even tried to change the entry for King into “Norman Harrison”, this however was not accepted. So I through away 90 euro’s and entered Norman. After this everything has to be realised, read whenare we going to drive and who is watching our house and the rest? Northern Italy is so beautiful, that you should not just drive through, exhibit and drive back. On Friday I had my birthday and wanted two days off, including the journey of 940 km included. Our friends, the Bechstadt’s, agreed once more to guard our property, so that we could leave for 5 days. We started our journey on Thursday morning, together with Prada, Senta, Norman and lots of lugage in the car. The first stop that was made, had to be at the Moseltal Bridge, where we had planned a lunch accompanied by the most beautiful weather. Harry was enjoying himself very much and let the sun burn his skin.

Our journey continued with a next stop in Bruchsal. Our hotel for the first night was located in Müllheim, just in front of the Swiss border. The further south we came, the warmer it was. 35 degrees Celcius. In the picturesque Müllheim a City fest was held and we enjoyed a wonderful evening outside in the Lindenhof.
The dogs stayed behing in our cool hotel room. Our 2 dog ladies, once again gave me headaches, as they once again refused to go to the toilet to do their needs. Therefore I am so fond of males, as they always do their thing. Until late in the evening we have been walking with them in the woods, in the hope that they would do something. Well, no…., we found a dog school and here we silently let tham run on the terrain and finally they have done a large pee. This game continued in Italy. Friday, I celibrated my birthday and we had a large breakfast, before continuing to Bella Italia.

The lunch break was taken at the Sursee in Switserland, at a parking near the lake. Here we where completely by ourselfs and where the dogs able to run around and stretch their legs. NO, the ladies did not pee here either!

Getting closer to Italy, the weather became cooler, for the Saint-Gotthard Tunnel was a traffic jam, which only cost us a delay of approximately 45 minutes. At the moment we came out of the Tunnel we only had 12 degrees. Okay, we where high in the mountains. In the last tunnel before Como, we met our dear friend Lenka Klimova, together with her son Lukas and her Bearded Collie Terry, in the car. She had been driving all the way down from the Czech Republic and stayed in the same hotel. Arriving in Como, we had 24 degrees and it was clouded.
That night we went out with Fernando, Sergio and their Swiss frinds and visited a perfect Restaurant at the Como Lake. The Italian cuisine…… mmmmmmhhhhhh.

from left to right: Sergio, Fernando, the birthday child, Harry, Lenka and her son Lukas

Saturday morning it was still dry, but clouded. Not that it bothered me, as I had to be in Fernando’s dog salon at 08.00 that morning, to wash my furry friends, blow-dry them and groom them. Harry, Lenka and Lukas drove to the oh so beautiful Bellagio. This place is a real dream and I felt pity for myself, as I would have loved to join them. But: without diligence no price. Thanks to the help of Fernando and Sergio, who helped with blow-drying the dogs, I finished at 14.00 hrs.
Offcourse Prada and Senta had not peed that morning. Senta even gone that far, that during blow-drying she placed 3 thick sausages on the table and afterward peed. YES, ON THE GROOMING TABLE….. how painful…..

Returning at the Hotel, quickly called Harry and agreed to meet in Como for coffee. I waited in the Lobby of the hotel for the taxi that was supposed to pick me up, when it started raining. This could not be called rain, it was a cloud burst. The taxi hardly got forward. Down town Como, the lits of the canalisation where pushed up due to the enormous amount of water. It stopped as quick as it started, due to which we had a wonderful afternoon in Como and returned to the same restaurant as the night before. It didn’t get late that evening. Sunday morning the alarm clock went of at 04.15. Leaving to the show at 05.30 and arriving at 06.15 and had to join a, at that moment already long waiting line. From 06.15 until 14.15 I had been standing of my feet, when I finally found the time to sit down. Around midnight I went to bed, a day of 20 hours. But a rewarding one. From the 45 entered Bobtails, 5 males and 9 bitches had been entered in the Youth Class. “Norman Harrison””ended 2nd behind Vanbossche’s “Nochmal aus dem Elbe-Urstromtal”, who became Wold Youth Winner. Am I sad, that I became 2nd with Norman? NO. I have always said, that if I would become 4th and the 3 in front of me are from my breed, I have done more than well.

“No Limits aus dem Elbe-Urstromtal” alias Senta won the Youth Class Bitches and became Best Of Breed Junior. I was more than satisfied.

Senta on the move

With the Beardies, who almost got judged simultaneously, and therefore caused a mega stress, everything also went well. Both Youth Winner are from our kennel and Lenka together with her Terry became Res-World Winner. Only our “Prada”not get placed and that was a pity. Afterwards we went to the Big Ring (an enormous walk by foot before getting there), for the judging of the Best Youth Dogs of All Breeds, who where also divided over in 10 Groups. Here the long waiting started, as everything took much longer than expected. Our judge was Mr. Kavic from Slovenia and I had not too many expectations. But as well Senta as our Beardie Bicth Nora Jones ended amongst the last 10.

“Senta” in the Big Ring

After we had finally packed everything, it had stopped raining and we were able to get to the car without getting wet. All of us where deadly tired and hungry. After having returned to the hotel, the dogs where taken care of and we rushed to the nearest restaurant for a large beer. The following day the alarm clock was set to 07.00, everything was packed, we had breakfast and of into the car for a returning journey of 940 km that day. The whole journey through Switserland we where accompanied by heavy rainfal and also had an enormous traffic jam in the Schifferstadt/GER area. A last pitstop was taken at our so beloved Moseltal Bridge, however this time on the other side. At 21.00 hours we came back home and everything had been excellently taken care of by Ulf and Anette Bechstedt. THANK YOU VERY MUCH. 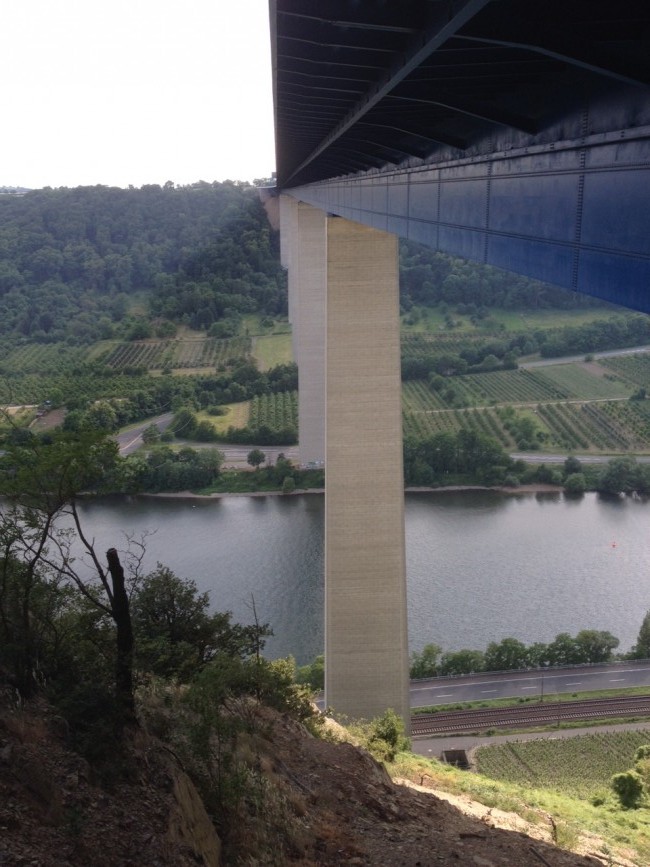 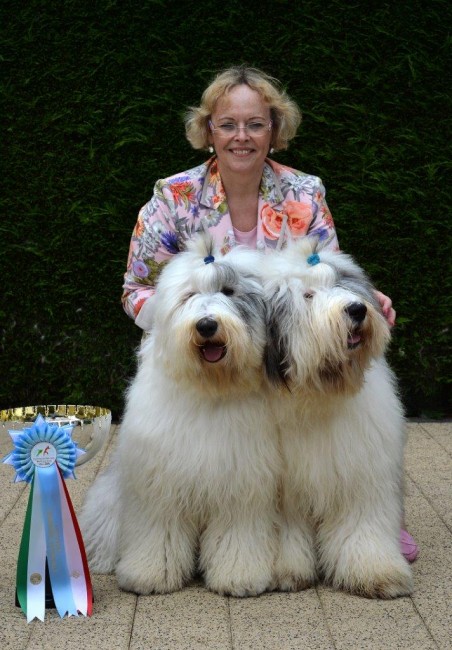