This was the short version abouth the Winner Amsterdam, now one week later I finally have found the time to write the complete story.

Best of breed Bearded Collies was our Int-NL-LUX-Ch. Winner 2012 and now as well Winner 2013 Lärkängens at Firsticebears 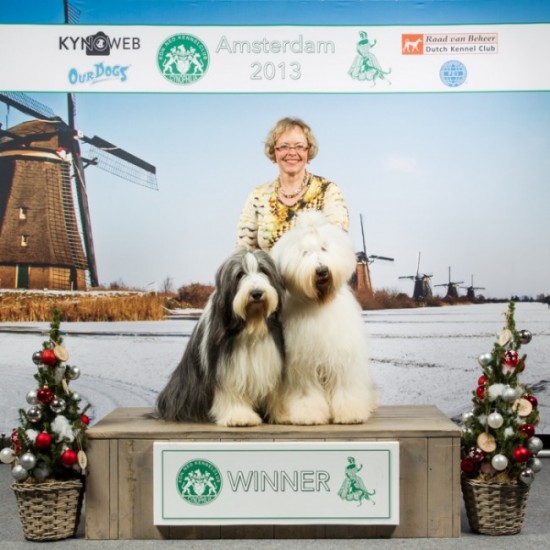 Normally the Winner Amsterdam is held every year in the month of November in the RAI. My first Winner participation was in 1975 en I believe, that I haven’t missed one since. It is the biggest and most known Show in the Netherlands and for me still connected with exitement and anticipatory pleasure. This time everything was different. We were in a different Hall complex, the Show was in the middle of December and one Friday there was a One-day Winner, read a CACIB Show with all breeds and that on Friday the 13th and I am supersticious! If you want to be in Amsterdam at 07.00, on a normal working day, because the Hall opens at 07.30 and also want to park close to the Halls, yes then you will have to start driving (in this case Eef Martens and Conny) at 05.15 hrs in the morning. Get up at 03.15, because all the dogs have to go out, the showdogs wear their socks and that absorbes time. I myself need about 45 minutes to get myself fit to be seen. We had Lasse and Geddes, the two Beardies to show with us, the young Beardie bitch Prada who had to learn and our wonderful OES male King. Mister Wieldraaijer, an older gentlemen, who is already a judge for ages and under whom I have shown many times, judged the OES. Only 4 where entered. 2 males and 2 bitches. Normally I would not have entered at all, but: since King had won Reserve Best In Show in Bleiswijk/NL, he all of a sudden was in de race for TOP OES Show Dog 2013 after just 3 shows. The owner of the dog in front of me, had made some negative remarks about my King and I was now going to try to show her that King was the better dog. “King” had not been entered for the Winner on Sunday and therefore could not gain any points. All our money was placed on “Jadore”. “King” became Best Male and not Best of Breed under Mr. Wieldraaier. I was very dissapointed. But that is how it is. This all made the battle for the points even more exciting.

King shows his wonderful movement and I myself are having problems with a serious Achilles tendon. 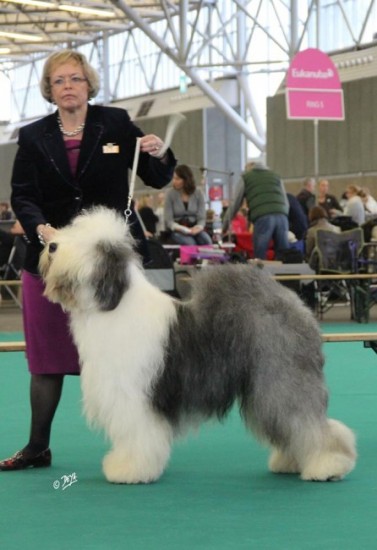 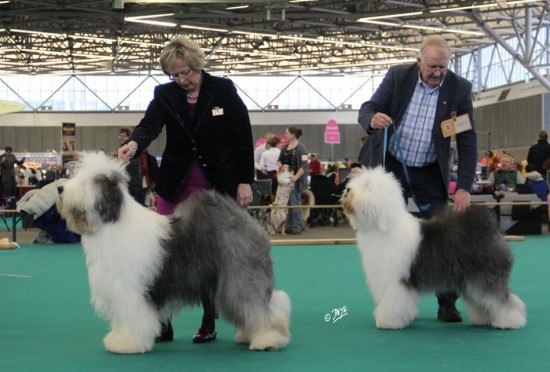 It was Sunday, the 15-12-2013, again getting up at 03.15. This time Harry was with me and without his help, I would not have made it. Eef Martens was on the way to the Winner together with Peggy Jeurissen, as our car was completely full. We also had our brown Beardie Bitch with us. I was going to show 4 dogs and should have in fact shown a 5th one, Geddes owned by Eef. However, my Achilles tendon was causing so much pain, that I didn’t even know if I could do it all yes or no. You run quite a bit of a show like this, the rings are large and the judge wants to see movement. I was really excited and curious, how Mr. Anderson , the Swedish judge would judge the 28 OES. He himself is the breeder of the famous Alistair’s Bearded Collies and in the meantime judges many breeds. It gave me a headdache, that he was judging the Bobtails and the Beardies. You normally do not win with two dogs under the same judge, this needs a huge personality. For me the day started well, as my competitor for the points became 2nd of 2 and did nothing further. Due to this it would have its final at the Show of Cuijk, which was going to be held one week later. Here I HAD to become Best Male with King. Our “Doro” was in top shape and both of us wanted to win. Doro had never won the title Winner Amsterdam. We wanted to show her on the Winner and had therfore not mated her in september of this year. It worked! Not only did she become Best Bitch, but also won Best Of Breed and received a glamourous judging report. Conny was over the moon! That Mister Andersson has a very strong personality, could be seen in the fact that he gave Best Of Breed to our Bearded Collie Male as well.

In the Big Ring, the Spanish Mr. Juan Naveda Carreo judged the large Group 1, which excists out of almost 42 Dogs. The Winner’s Organization had instructed the Judges to make a selection of not more that 6 dogs. Out of the 10 Groups there are about 3, who only have 12 to 15 dogs! By the time Mr. Carreo was almost half way, he had already selected his 6 dogs. The speaker in the ring pointed this out to him and all could leave the ring after this! He didn’t even have the decency to take a glance at the 2nd part of the Group. Once again Chris Beirendonk had been so kind to stay a little bit longer, to show our “Jadore” in the Big Ring, as I was showing the Beardie. We where standing at the end of this large group as last and fore last. This was very frustrating. To stand in the Big Ring with 2 Breeds at a Show like this, is something special. Therefore the judge should have the decency to have a look at all dogs in the ring. But, life continues.

A funny picture was made of Sjaak Meijer with his Poppie and I with my Jadore out of the Champion Class. We always have lots of fun, inside and outside of the ring although we are competitors. That is how it should be.