It are late messages from Bremen/GER. This has two reasons: On the Sunday show already, I had problems due to gastrointestinal infection. This knocked me out and I was sick for 3 days. Afterwards we found out that our computer had also been “infected” and was not cured until yesterday, Sunday.

During the weekend of 01 and 02 August we where in Bremen/GER, to the National and International Show. We didn’t need anything, but the City of Bremen is very beautiful and it had been almost 35 years ago, since I have been showing in the Stadthalle. Reasons enough for a weekend trip to Bremen, with “Prada” and “Senta” in our luggage. On de way down on Friday, there where no problems or long traffic jams. We only had to take a detour in the Vörden area and did we go off route. That was completely different on the way back. Only traffic Jams and that is not nice when you’re sick. Harry had to drive the complete way back.
We had a beautiful hotel in Bremen, with lots of green, directly on the Weser River and on a stone throw away from the Hall’s.
We where looking forward to the fact of meeting good friends again, as Lenka Klimova and her son Lukas, the Hellwig family was also present and the Zimmermann family also wanted to come.
Off course there also where 3 interesting ladies, who would judge our breeds. On Saturday it where Misses Assenmacher for the Beardies and Misses Cousins from the United Kingdom for the OES. On Sunday the judging was done by Misses Erika Bakker from the Netherlands. She judged both of our breeds. That Friday evening we quickly wanted to drive to the Hall to have a look at the entrance and the parking possibilities, so that we knew where to park the next morning. But things go as they go and we couldn’t leave anymore from the parking and had a wonderful evening on the camping site, in the most excellent company and where rewarded with a wonderful dinner. It was fresh that evening, but the two days after brought beautiful Summer weather. Saturday at 06.30 we stood on the parking, as the hall’s would open at 07.00. There was only one small problem: 2 rings in 2 different hall’s for Bobtails and Beardies. Our two girls had to start at exactly the same time in the different rings. STRESS…. All friends had gathered at the Beardie ring, it was cosy and everyone had good times with eachother.
On Saturday, Harry was our saviour in needs and showed our OES bitch “Senta” in the Youth Class and received an excellent judging report.
The Saturday evening after the Show, we used to go rapidly in to Bremen and have a closer look at the city. The Schnoor, the Roland, the Townhall and off course the very famous Bremer Stadmusikanten (Brem Town Musicians). Mrs. Antonini, the sonderleiterin with the Bobtails had advised me, to take both legs of the donkey in your hands and make a secret wish. Lets see if this works. Bremen is a wonderfull city and we are sure that we want to go back one day. Our small “travelgroup” had gathered in the Rathskeller for a very nice, but especially delightful dinner.

Sunday morning the alarmclock was set again at 05.00 hrs. Let the dogs out, quickly drink a cup of tea, pack everything and in the direction of the Hall. As the day before, the Hall opened at 07.00 and this time everything was in the same ring, which made a lot of things easier. Breakfast was used in the Hall and there was a good catering service with delightful sandwiches. I took a bun with scrambled eggs and coffee. This I shouldn’t have done….. Shortly after I had the first stomach cramps. 🙁 Inspite this, it was another succesive day. Our OES Bitch “Senta” became German Youth Champion and won Youth Group 1. “Prada” also became Best Of Breed on both days and was selected amongst the last 5 to 6 of FCI Group 1.

This picture with thanks to Nadine Scheid. 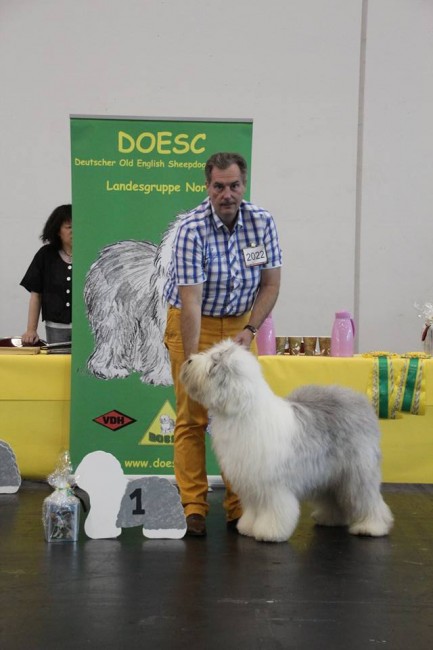 Saturday evening at the Townhall, with the Bremer Stadtmusikanten

Sunday’s we had another pleasant surprise. Elka and Klaus Blazek had come to Bremen with their “Never say Never aus dem Elbe-Urstromtal” and to show him in the Intermediate Class. These are the winning dogs. Klaus is standing behind our Senta.

On 01 and 02 August, in Swindon/UK, a double Open-Show was held. The judging was done by Mr. Tony Steele and Misses Anne Lucas. Eve and Chris Jones had entered “Lafite aus dem Elbe-Urstromtal” in the Limit Klasse and she won this on on both days and became Res-Best Bitch.

In Poland, at the CACIB Show of Posusj, “Ch Lafayette aus dem Elbe-Urstromtal” has received her last points, necessary for the title of International Champion. Here she won everything: BEST In SHOW!!! “Tosia” is owned by Dorota and Pavel Bodzioch, Macoes Kennels in Warschau.

Nicole Kelly, is accompanying her father on the many large trips withinn the United Stated. Nicole is a fanatic Junior Handler and is very successful, with her “Snowy”. That is: “Never let you go aus dem Elbe-Urstromtal”. Hopefully we will receive a lot of good messages from Nicole and Snowy in the near future. 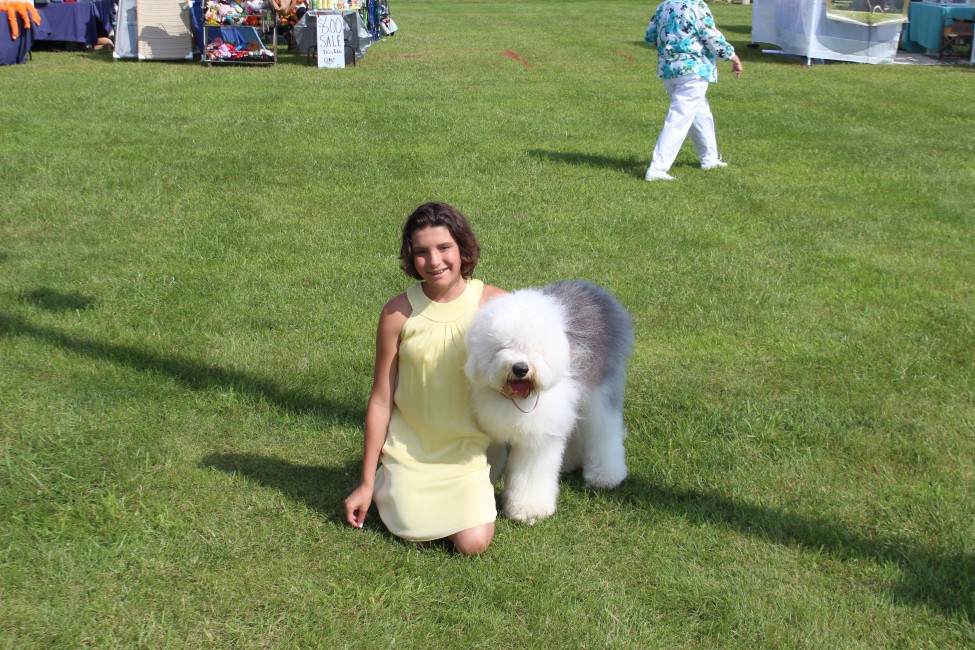 The past weekend there where again some remarkable exhibitional results. Eve and Chris Jones had driven to the wonderful Builth Weel, located in the beautiful Wales and here a Int-Show for all Breeds had been organised. The famous Mrs. Christina Bailey/UK from the Zottel OES was the leading judge. “Lafite aus dem Elbe-Urstromtal” started in the Limit Class, won and became Best Bitch with CC. A remarkable success of which we are very proud. 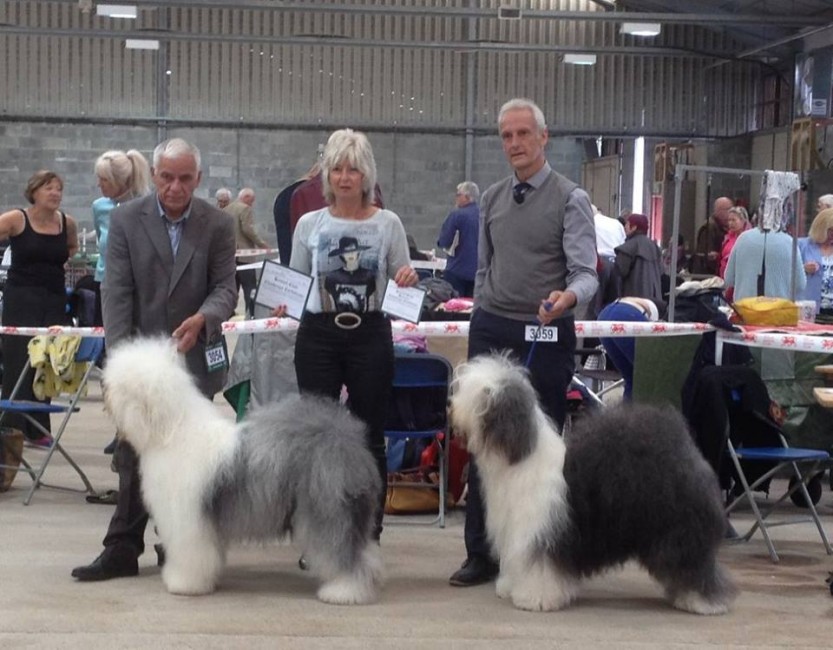 That same weekend, in Leipzig/GER a double CACIB Show was held. The German Winner Show. The Van Bossche family had entered their “Pepe” in the Intermediate Class. The first day, the judging was done by the German Mrs. Heidi Müller-Heize. She was convinced of the qualities of the World- and European Youth Winner “Nochmal aus dem Elbe-Urstromtal“ that she gave him the CACIB, Best Male and BEST OF BREED with just 18 months. The second day, the judging was dome by Mr. Hartig/GER and “Pepe” “only” won the Intermediate Class. 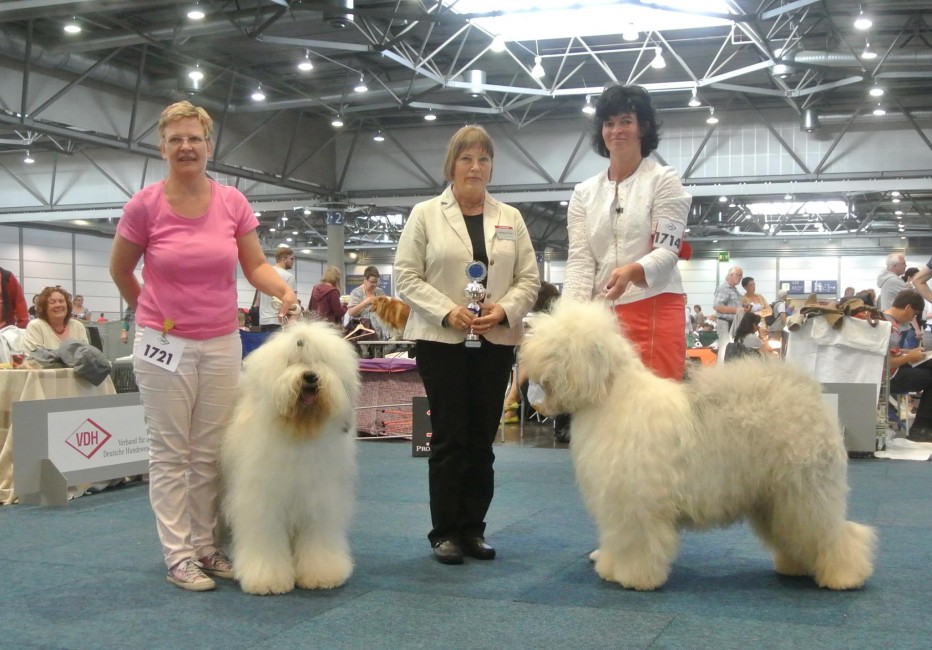