The Vanbossche family was once again en route with their new camper and all of their barkers. This time to the Int-Show of Karlsruhe/GER. This beautiful city is located at the utmost border of the northern part of the Black Forrest in Germany. Mister Jochen Eberhardt judged the OES’ here. Father Floh was present, together with his son Pepe. On the first picture you see the 6,5 months old “Nochmal aus dem Elbe-Urstromtal“, who became Best Puppy. Another picture, with the movement, shows  his father Int-Ch. Justbecause aus dem Elbe-Urstromtal, who became Best Of Breed. You can clearly see that he inherited the movement from his father. 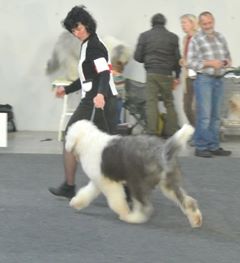 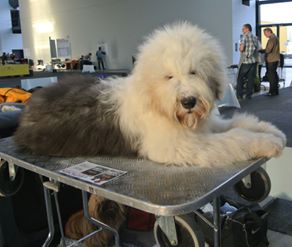 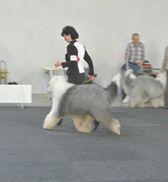 At the Clubmatch of the Belgian OES Club, held in Genk/B, John Kiefer once again showed “Ch. Keen on you aus dem Elbe-Urstromtal”. He won the Champion Class. Owner of KeYou is Maryse Cornelis.