The Showing Season 2014 almost has come to an end. In December there are another 2 large show, Brussels with the Belgian Winner Title and Amsterdam/NL with the Title of Winner Amsterdam. During last weekend, 3500 dog had been entered for the Brussels Show. The Hungarian Mr. Robert Kotlar was going to judge both of our breeds. Unfortunately but true, only 5 Bobtails had been entered, of which 3 Elbe-Urstromtal and the other 2 from “Snowbootbears”. Mr. Kotlar judged for the first time in Belgium and he himself breeds OES. The Halls of the Brussels Show are directly opposite the the famous Atomium, which is especially for the Christmas Season beautifully illuminated. Beacuase of the fact that we are always travelling in the early morning hours and are leaving in the dark, we could enjoy the “Christmas-Atomium”. Something that was less nice, was the enormous long way to the halls. A real challenge with our heavy trolley’s. Harry and I where worn out when we arrived in the Hall. Unfortunately, in Belgium, you never know who are going to be the Group Judges. One look in the catalogue at 08.00 hrs told us it was going to be Mr. Vanhoenacker, who would later judge FCI Group 1. For me this means that I am waisting my time, as I will never ever win something with this judge. It has always been like this and will always be the case. Why? No idea! Decency forbids me to go home and do not have to wait for 3 hours. What happens: King becomes Best Male and Niki Best Bitch and Best of Breed. At 13.30 the judging of the OES ended and thwaiting until 17.15 started, until Group 1 was going to be judged….. I spite of that it was a nice and relaxed day. the mood was carefree, happy and congratulations and applause came sporty. 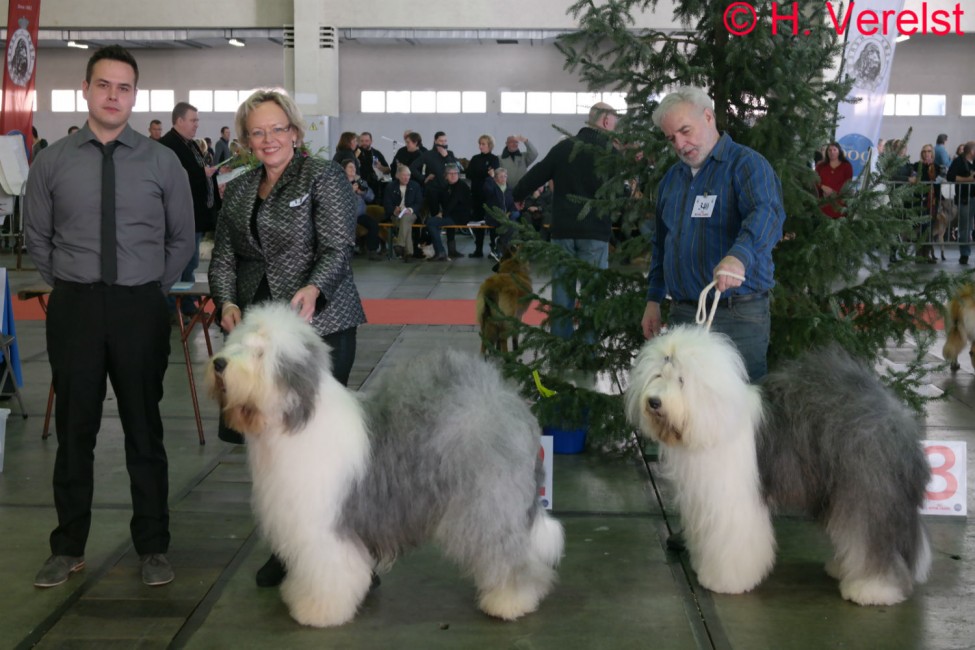 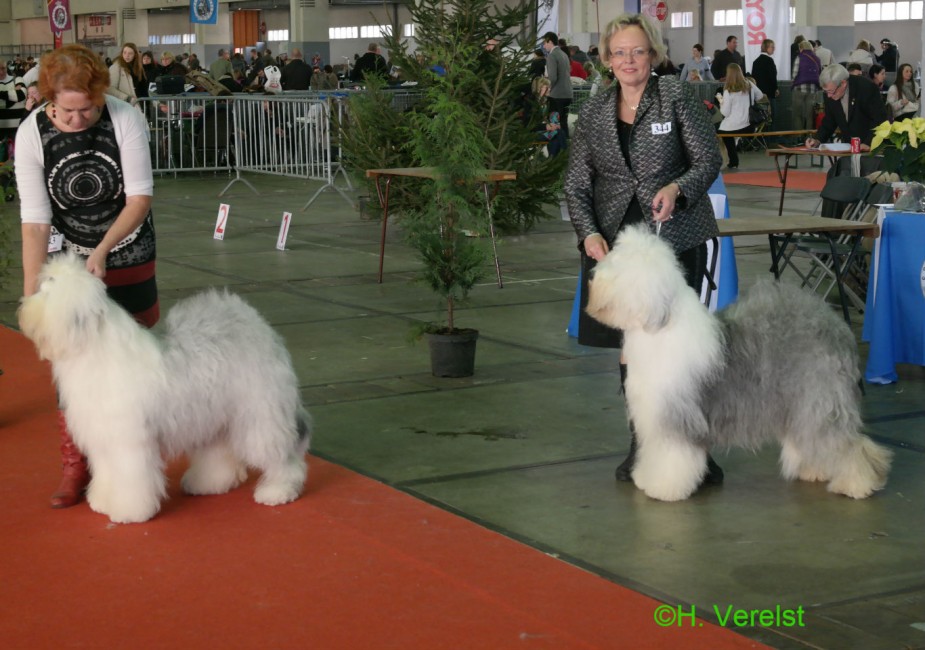 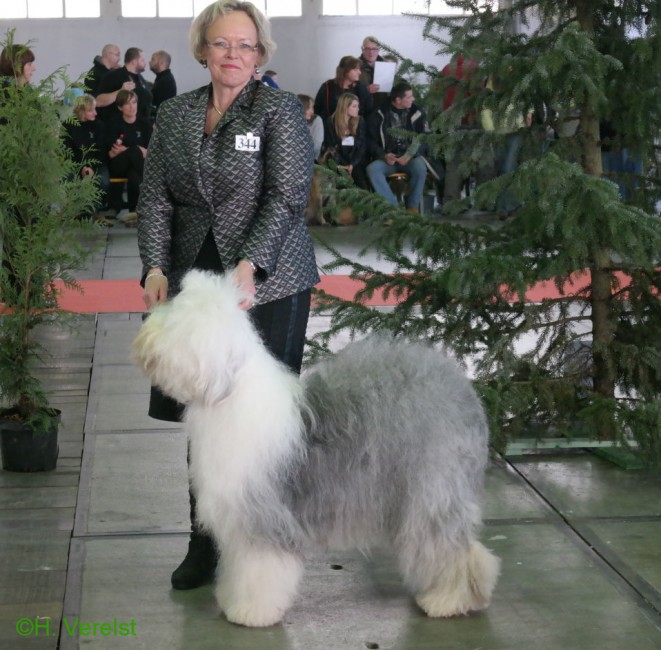 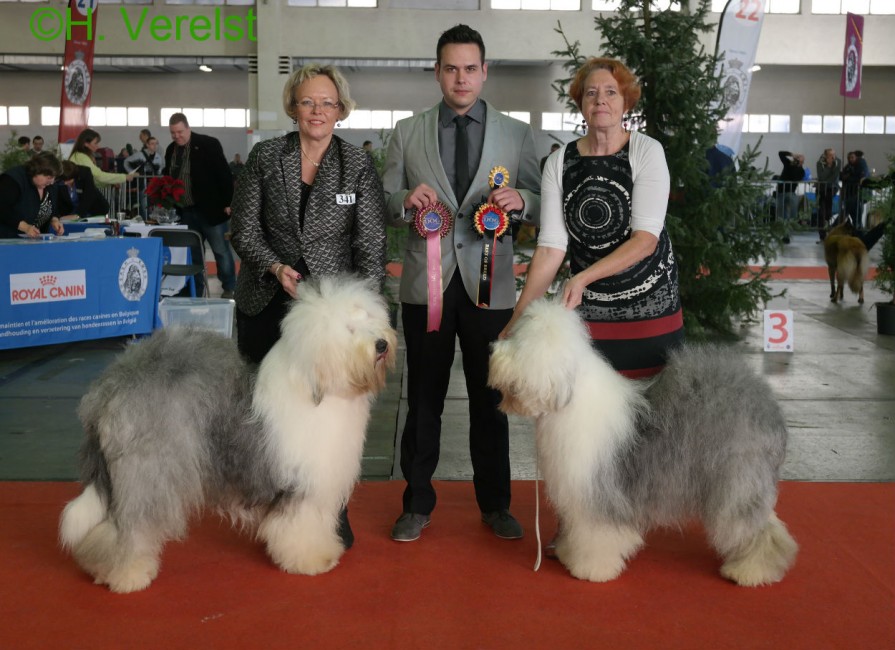 the catch of 1 day with 3 dogs in 2 Breeds, 2x Best Of Breed and 1x Best Male with King, Niki, and our Bearded Collie Bitch “Prada” 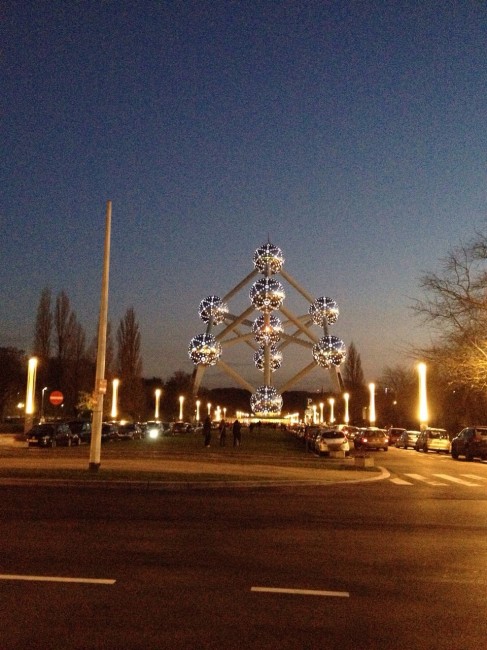 On Saturday the Vanbossche family had gone to the National Show of Kassel/GER. Baby “Pepe” Nochmal aus dem Elbe-Urstromtal became Best Puppy on Saturday with judge Mrs. Assenmacher and on Sunday at the International Show under Mrs. Müller/CH 2nd with the babies. 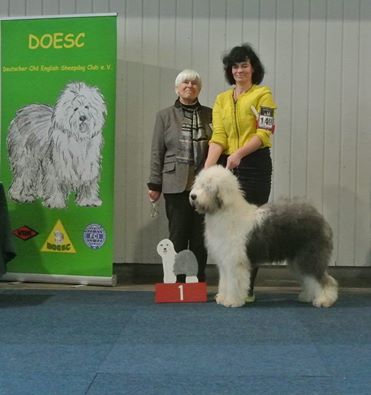 On Saturday, Papa “Floh” (Ch. Justbecause aus dem Elbe-Urstromtal) was present at the investigation of his son Pepe. “Floh” became with Mrs. Assenmacher Best Male. In Kassel, Texas (Ch. Eldorado aus dem Elbe-Urstromtal)  created a new record. He now is the father of 20 Champion Children. That is something special! Number 20 is D- and VDH -Ch Snowboots Man on a Mission. Bred by Mrs. Körting from Germany. It is the 3rd dog from this litter that became Champion.

“Morris” with his Owner, Mrs. Weissmann at the Show of Kassel.

“Snowboot Man on a Mission” 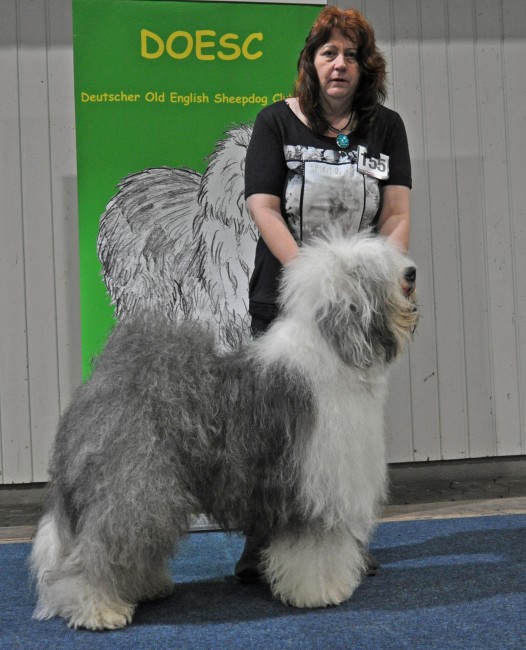