October is a very busy exhibition month and had a great start! On the first weekend of 4./5./6.10.10 there was a 3 day exhibition in Komaron / Hungary. Denisa Stejskalova traveled together with “Mona Lisa” and her son as a handler on this 3-day show. “Q’Mona Lisa aus dem Elbe-Urstromtal” (sister of my Queensize) won 3 x the CAC and 1x CACIB and 2x Res-CACIB. Thus, she has fulfilled all conditions for the title “Hungarian Champion” and is number 157 in the long list of champions. She is the 2nd out of this litter and for her mother “Jadore” the 6th Championoffspring  from 3 different litters. My “Doro” is not only beautiful but also a very special brood bitch who has been already retired quite a while ago..

“Champion Q’Mona Lisa aus dem Elbe-Urstromtal” on the left with the son of Denisa, who showed her . 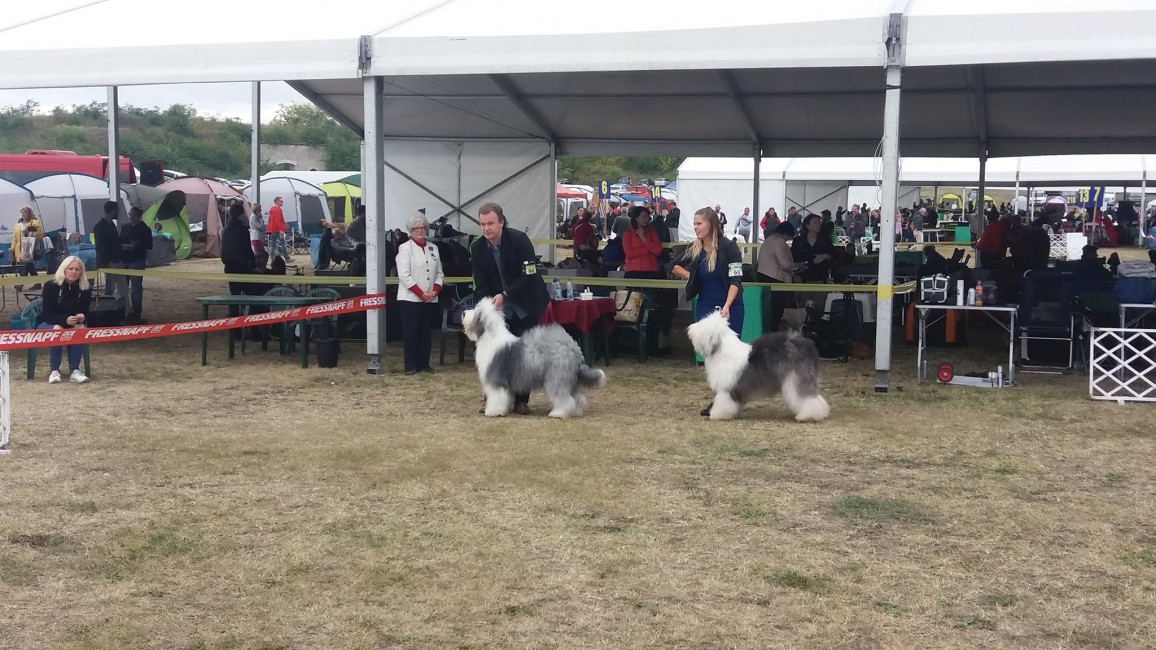 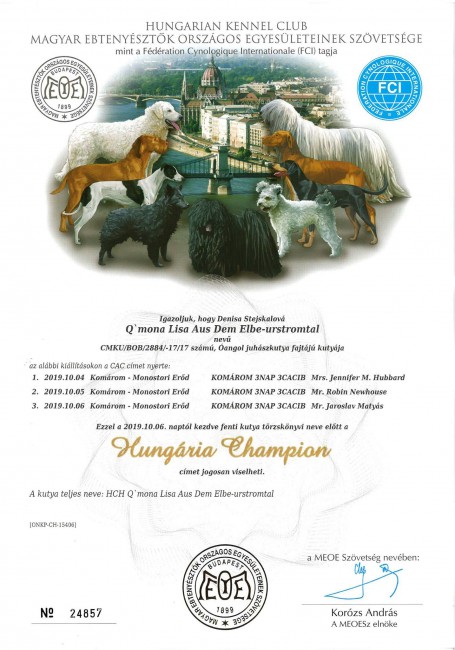 One week later “Mona Lisa” won at the Int. Show in Ceske Budejovice / CZ at the judge Mr. Vaclavik / CZ the CAC and received the Res-CACIB.

The CACIB on this show went to “Red and Hot aus dem Elbe-Urstromtal” (the sister of my Sonja who also won her first CACIB in Dortmund this weekend). The owner of “Ruzenka” is Magda Pospilova / CZ. A day earlier on 12-10-19 on the same show, she won her last CAC in youth class and is now Czech youth champion. Congratulations to my team in the Czech Republic 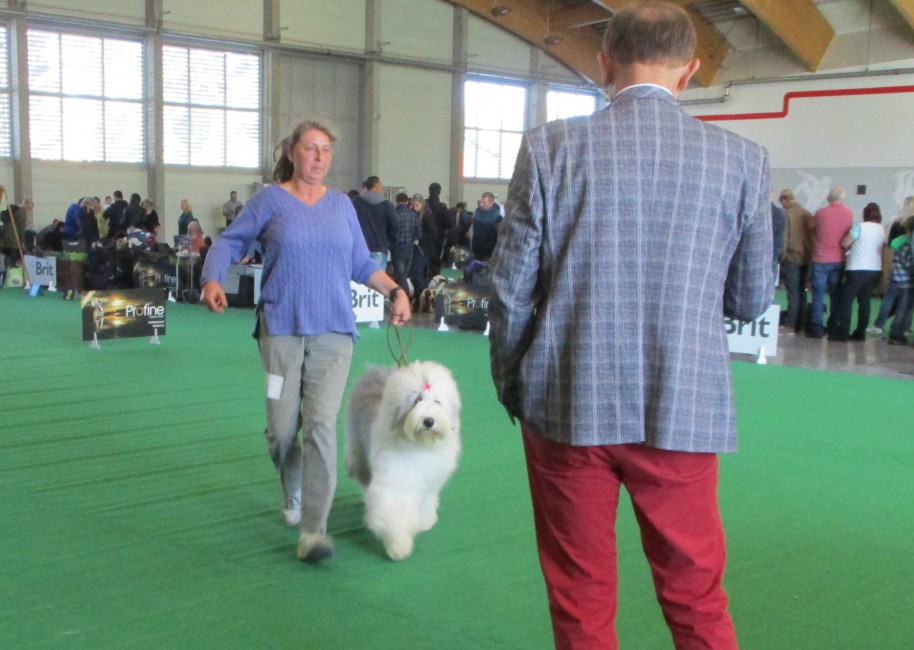 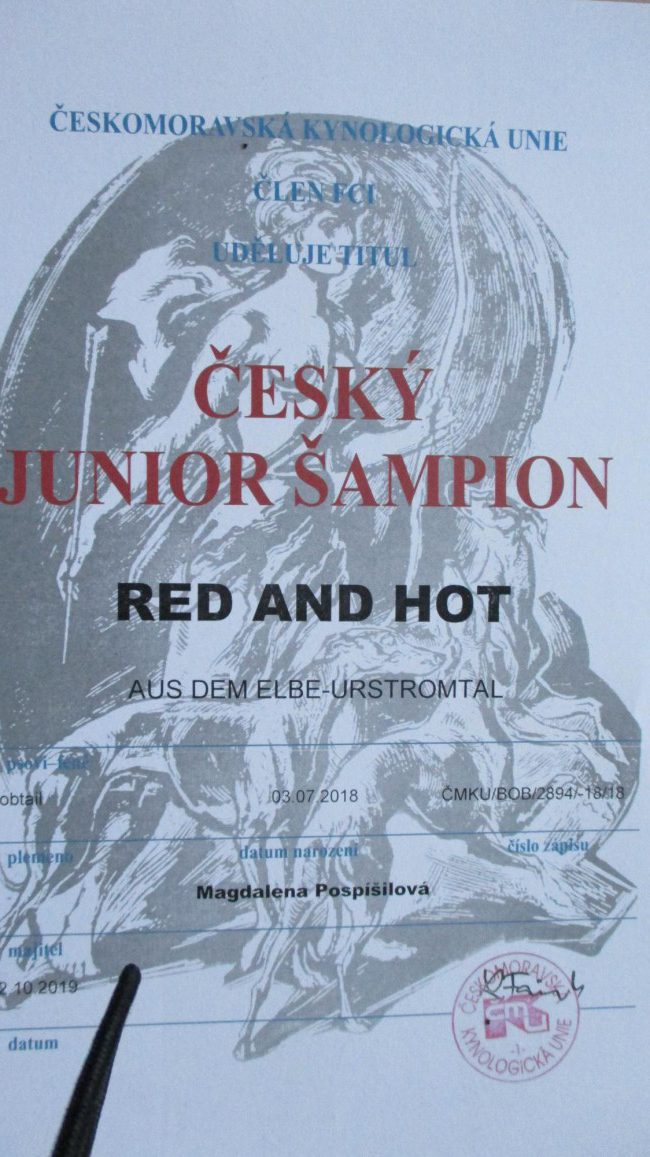 On October 11th the Herbstsieger Exhibition took place in Dortumd and on October 13th,20,19 the Bundessieger Exhibition. On the first day the South African Mrs. Wilson judges and on Sunday the German Mrs. S. Boyd. Due to a very stupid mistake in the registration system of the VDH my “Anna” was in the open class instead of the champion class. In Germany there a CAC and VDH-CA  to the German title in EVERY class for the winner. On Friday there was no bitch in the champion class and on Sunday only 1, that was more than annoying, easier I could not have won her.

On Friday I suddenly had to drive without Paul, the dog sitter had forgotten us. With 2 bitches alone is exhausting. Just to transport the cages with the bags, table and chairs and  as well  “Sonja” and “Anna” into  the halls is hard work. Everyone who knows the steep ascent in Dortmund knows what I’m talking about. Fortunately, Xavier Pottiez was on the show with his Bearded Collie and was ready to help me.

“Sonja” stood for the first time with her 15 months in the intermediate class. There were 14 OES entered 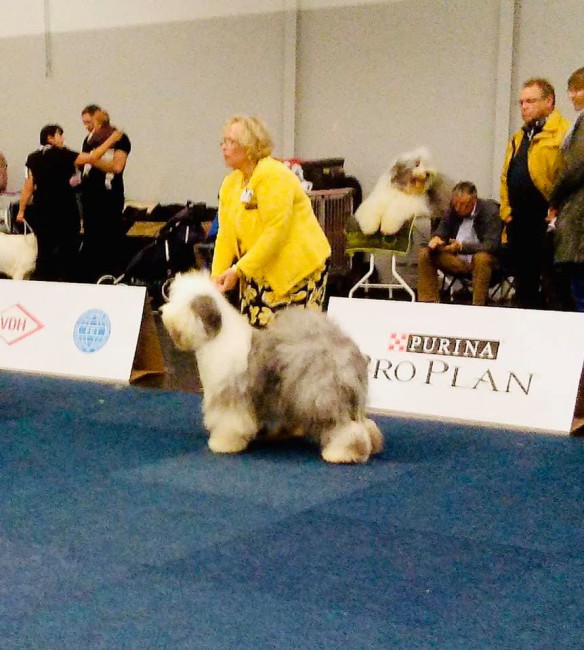 The lineup for the BOB and Best Bitch 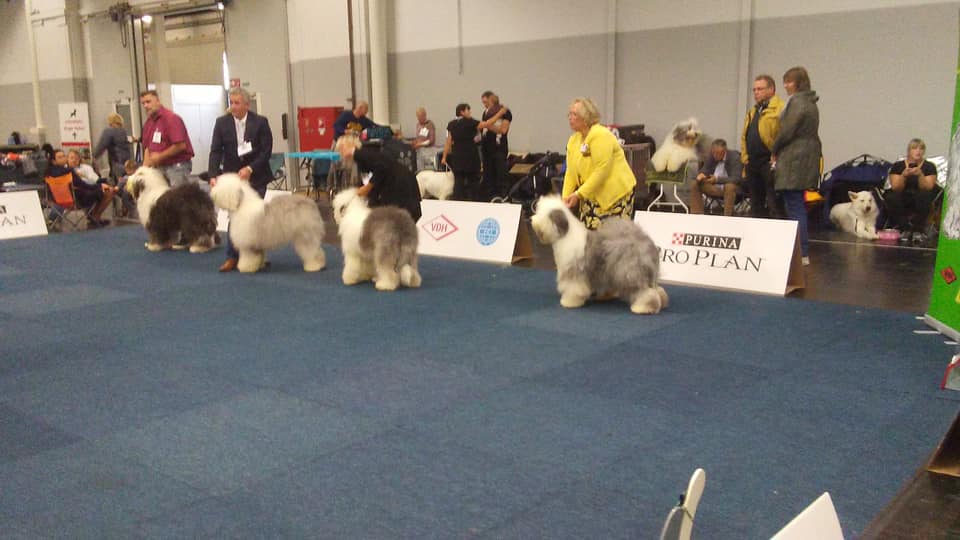 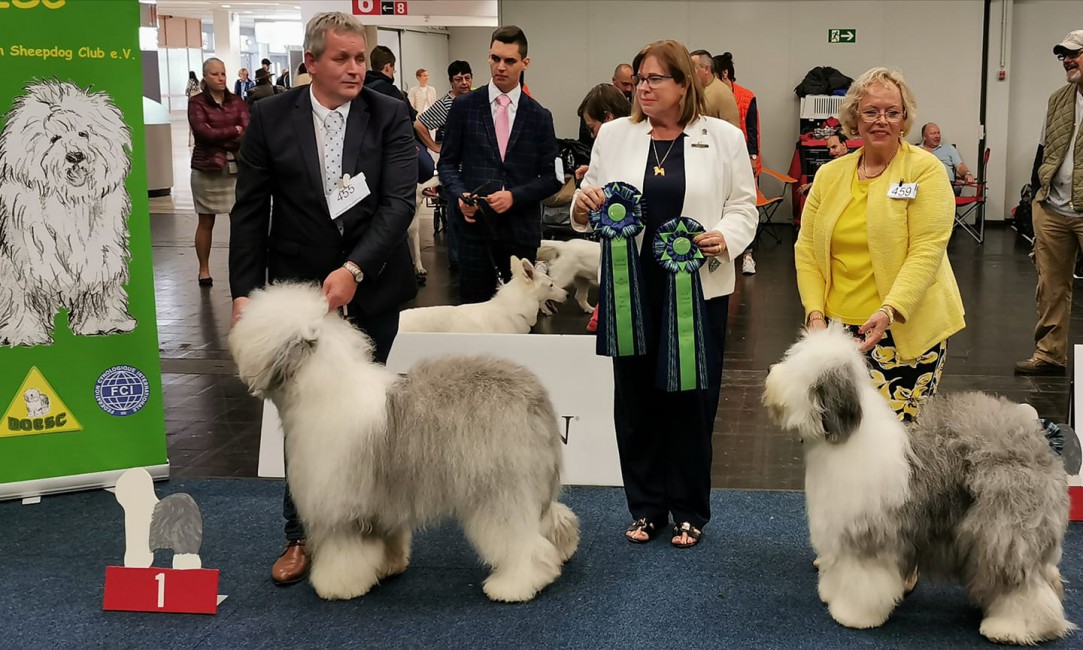 On Sunday the 13.10. I was happy, Paul could joing me to the show. There were 20 OES entered  and it should be OUR day! Ms. Boyd was also enthusiastic by “Sonja” and “ Q’Anna Anka aus dem Elbe-Urstromtal” she liked as well and gave her the open class. 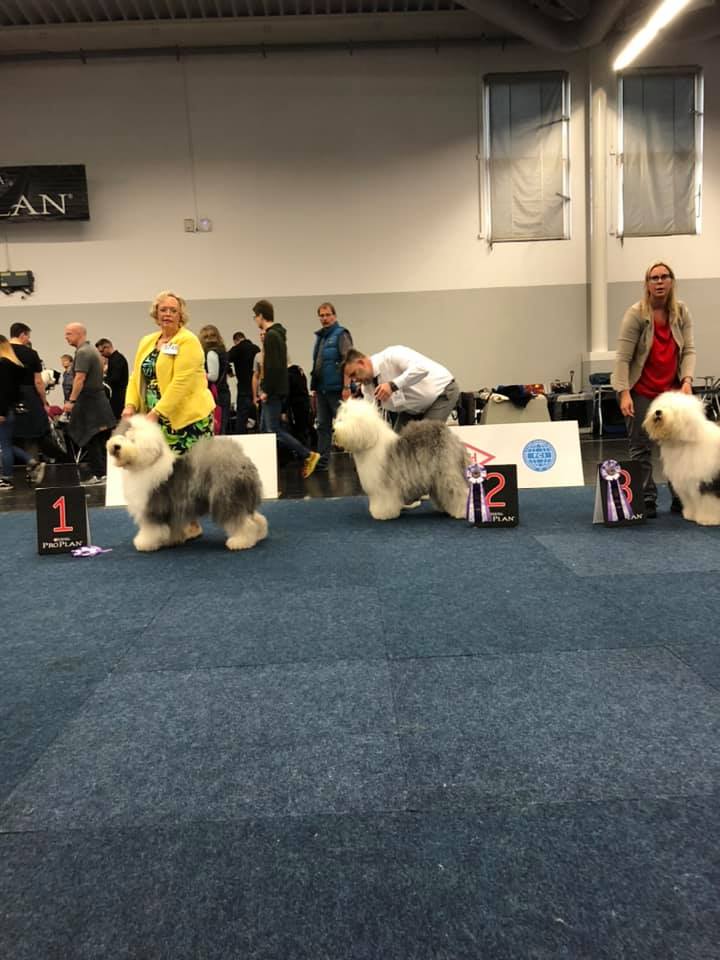 The culmination of the day was   “Sonja” Rote Rose aus dem Elbe-Urstromtal  won Best Bitch.  Paul had to be in the ring at the same time with “Anna”  and he was placed with her as Res- Best Bitch. What a thrill!!!! At that moment, it was quiet around the ring. My competitors were so jealous they could not even applaud. 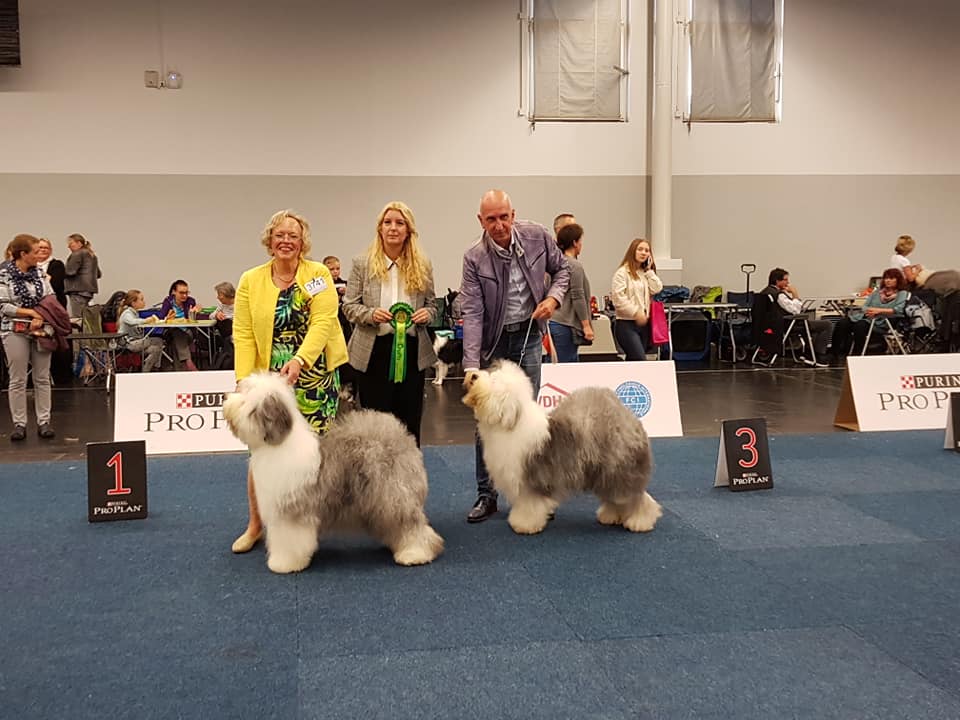 But then it was not “Sonja” who won Best of the breed but the male “Touch of Charm everywhere you go” by Richard de Severn., Of  course the crowed applauded in excess. The people are really stupid and seem to have overlooked that this male is a SON of my famous multi Ch. “Norman Harrison aus dem Elbe-Urstromtal”. You have to earn other people’s envy. 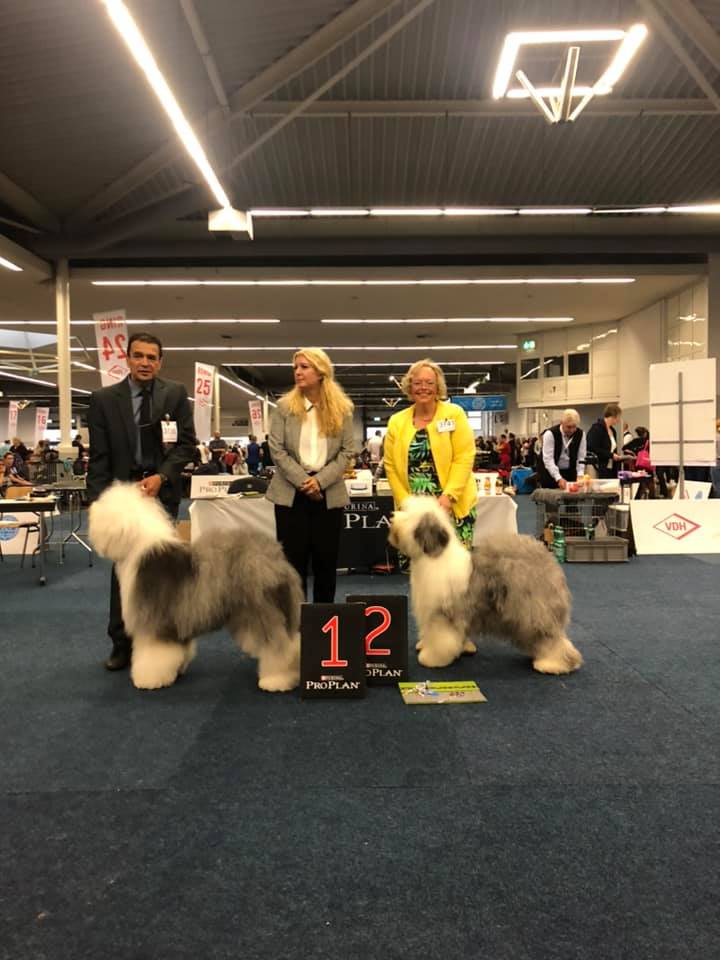 Sonja winner of the intermediate class 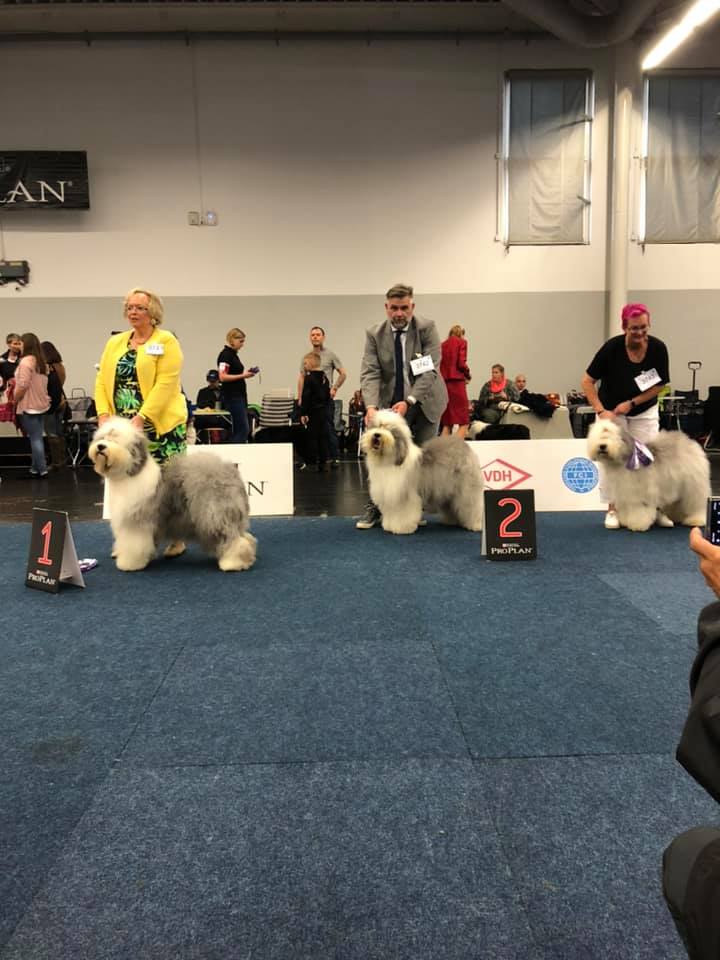 My girls Sonja and Anna with the rosettes they won on both days. 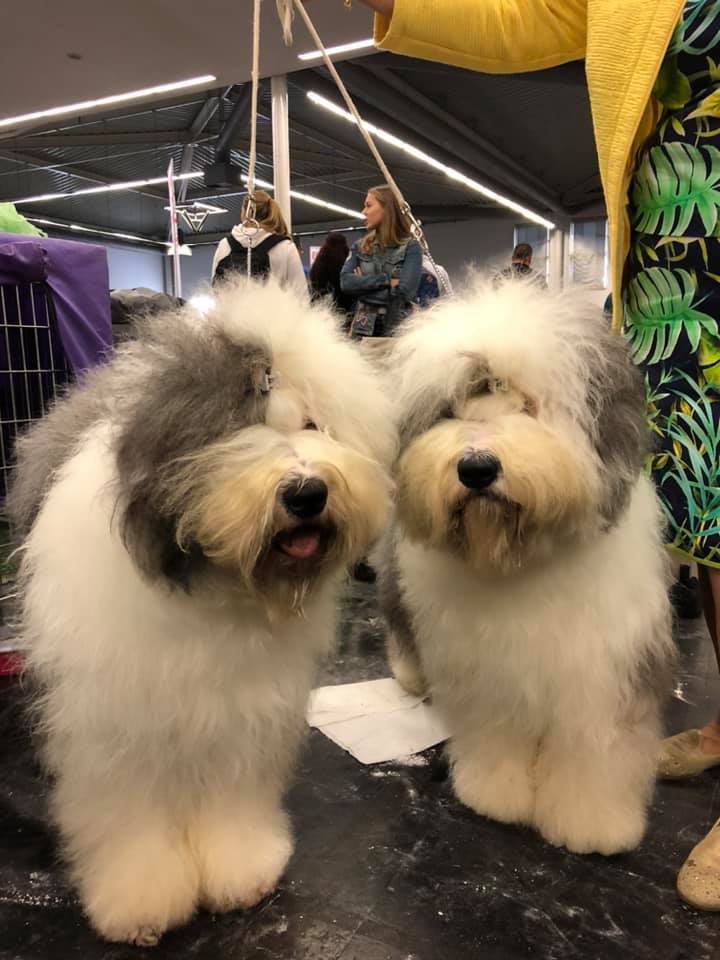 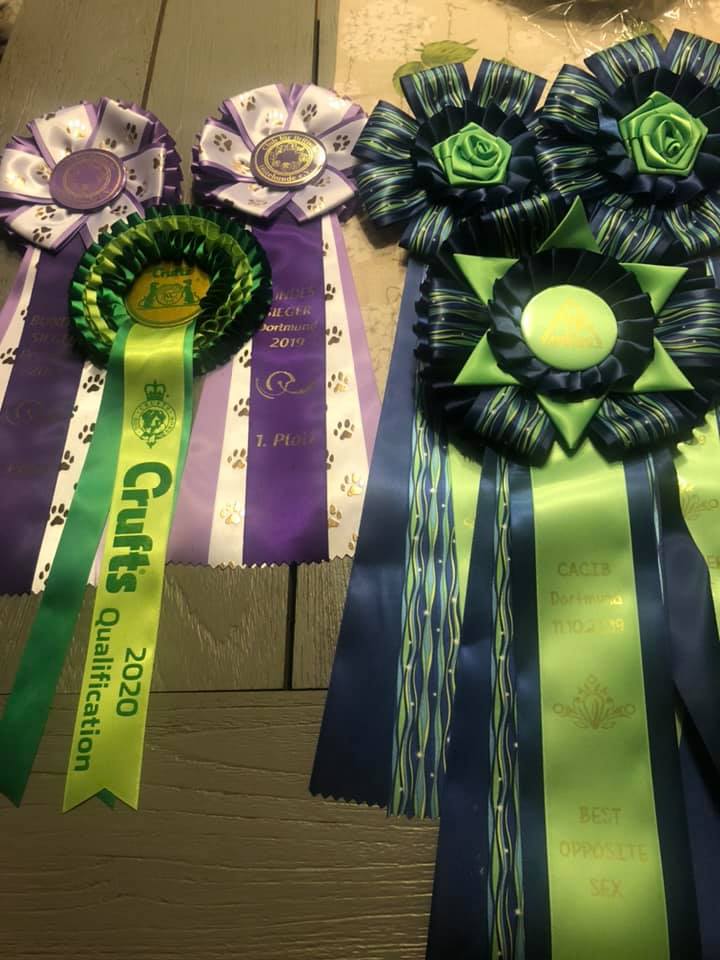 The famous publisher of  “OUR DOG”  newspaper Mr. Vincent Hogan came to visit us. 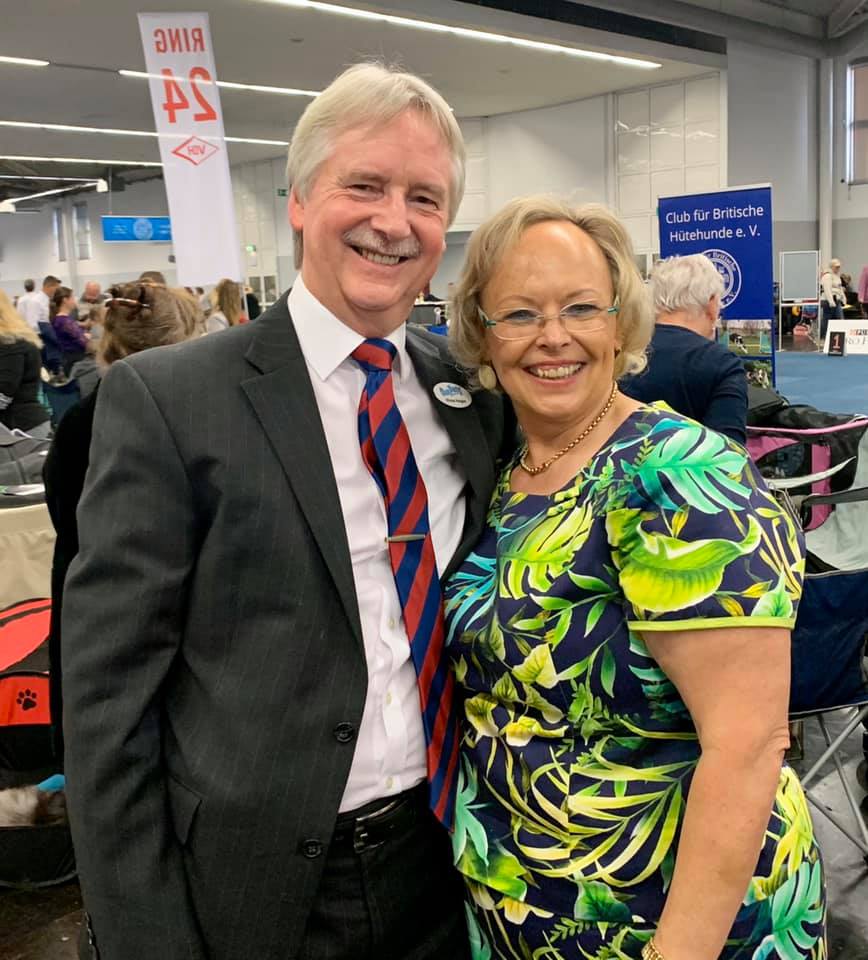