Finally there was a CAC show in the Netherlands. Sonja had already collected all the CACs she needed for a long time, more than she needed. However, we did not have the opportunity to exhibit after she had reached the minimum age of 27 months. Suddenly there was the announcement at “dogshows online” for the 2-day CAC Show in Goes. Of course, I immediately registered and paid for “Sonja”. 2 days later I wanted to register  “Cooper”, but the maximum number of dogs per day had already been reached. “Sonja” was the only OES on this show and got a wonderful critique from judge Hans van den Berg / NL. She was of course Best of Breed and that on her 3rd birthday

I was finally able to show again. The broken shoulder is still not healed after 4 weeks. But the handling is again very cautious. As an old show stunner, you are tough. 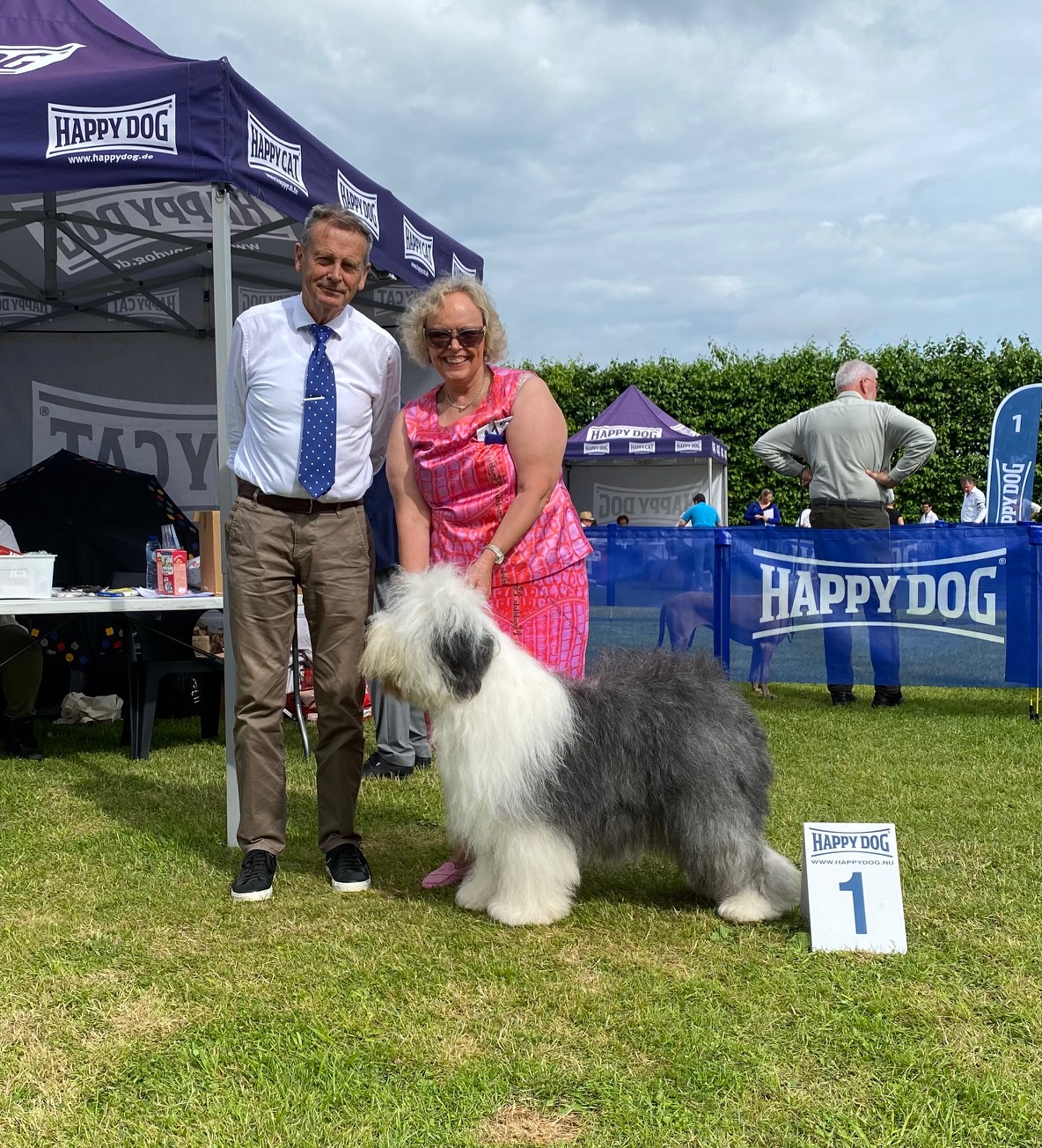 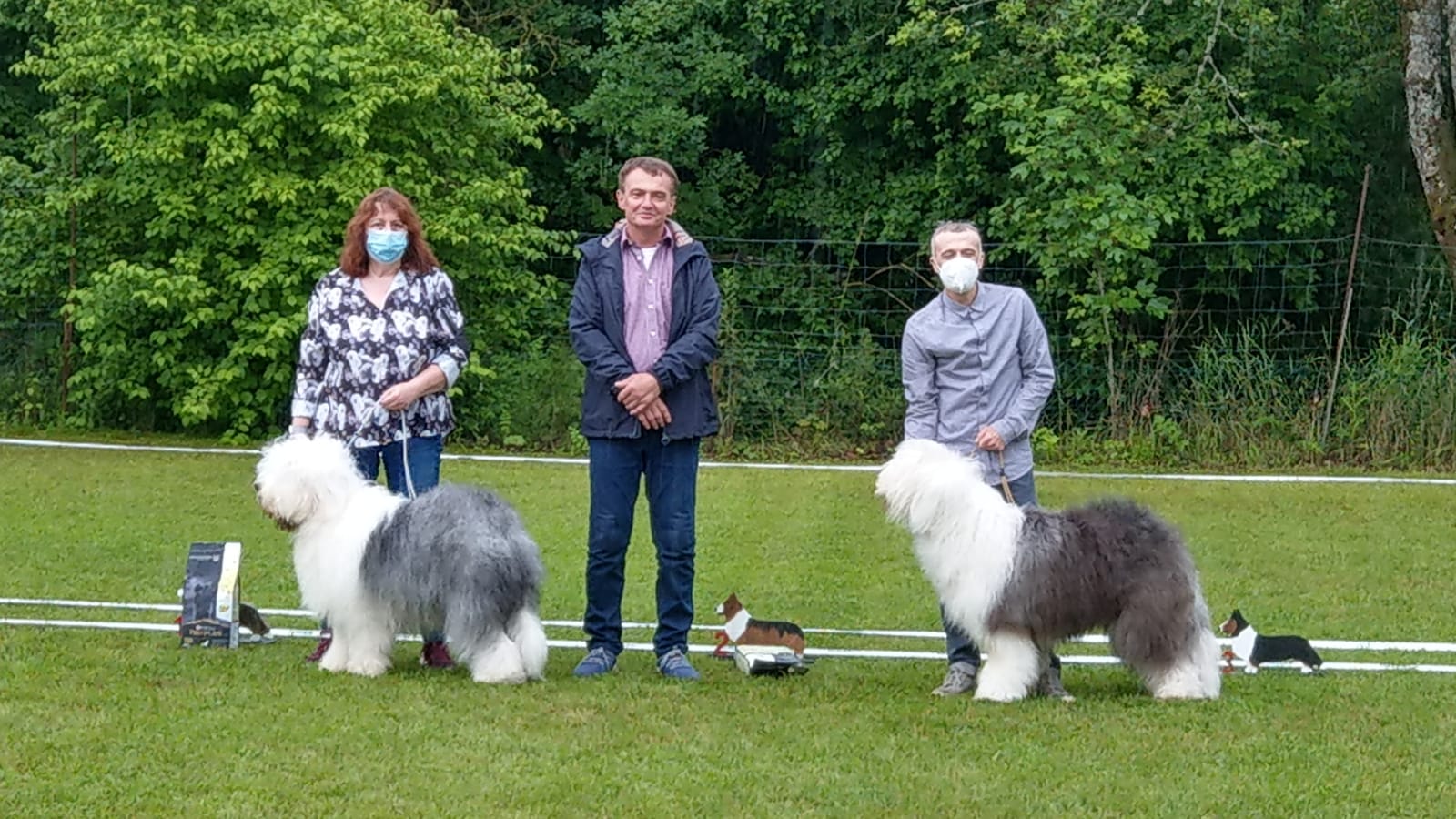 On July 11th, the Club for British Sheepdogs organized a special show on the greyhound track in Gelsenkirchen/GER. A good change for “Cooper” to practice and for Lilou to win another CAC. The judge should be Mrs. Heide Müller. Then, as in Dormagen, there was a change of judge after deadline to enter.  Ms. Bilsheim was invited. Since we both can’t stand each other, I thought for a long time whether I should even introduce my dogs to her. My Bearded Collie friend Monika Fuss had also asked me for advice on this and I gave her my honest assessment. Chris Beirendonk and I drove after all. There were 5 OES registered, of which 2 were missing, i.e. there were only our two dogs and the other male . I immediately knew what was going to happen.
Conclusion: I shouldn’t have given this chance and it will never happen again that I show under  this judge.
” Cooper” 2nd behind the other male, everything went so fast that we couldn’t even take photos.
Lilou in the ring for the BOB

Our little “Emmie” from the litter that we had from Cooper and Sky in October 2020 has now also become a show star. “The Emmie aus dem Elbe-Urstromtal” lives in Poland with Olga Wiechowska and Marta Morawska. Emmiewas on a long trip to the exhibition on July 24th and 25th. in  Satu Mare in Romania in 2021. There she was shown 3 times in the youth class. She won the Junior CAC three times and was Best of Breed. “Emmie” is now the Romanian youth champion. A good start. congratulation 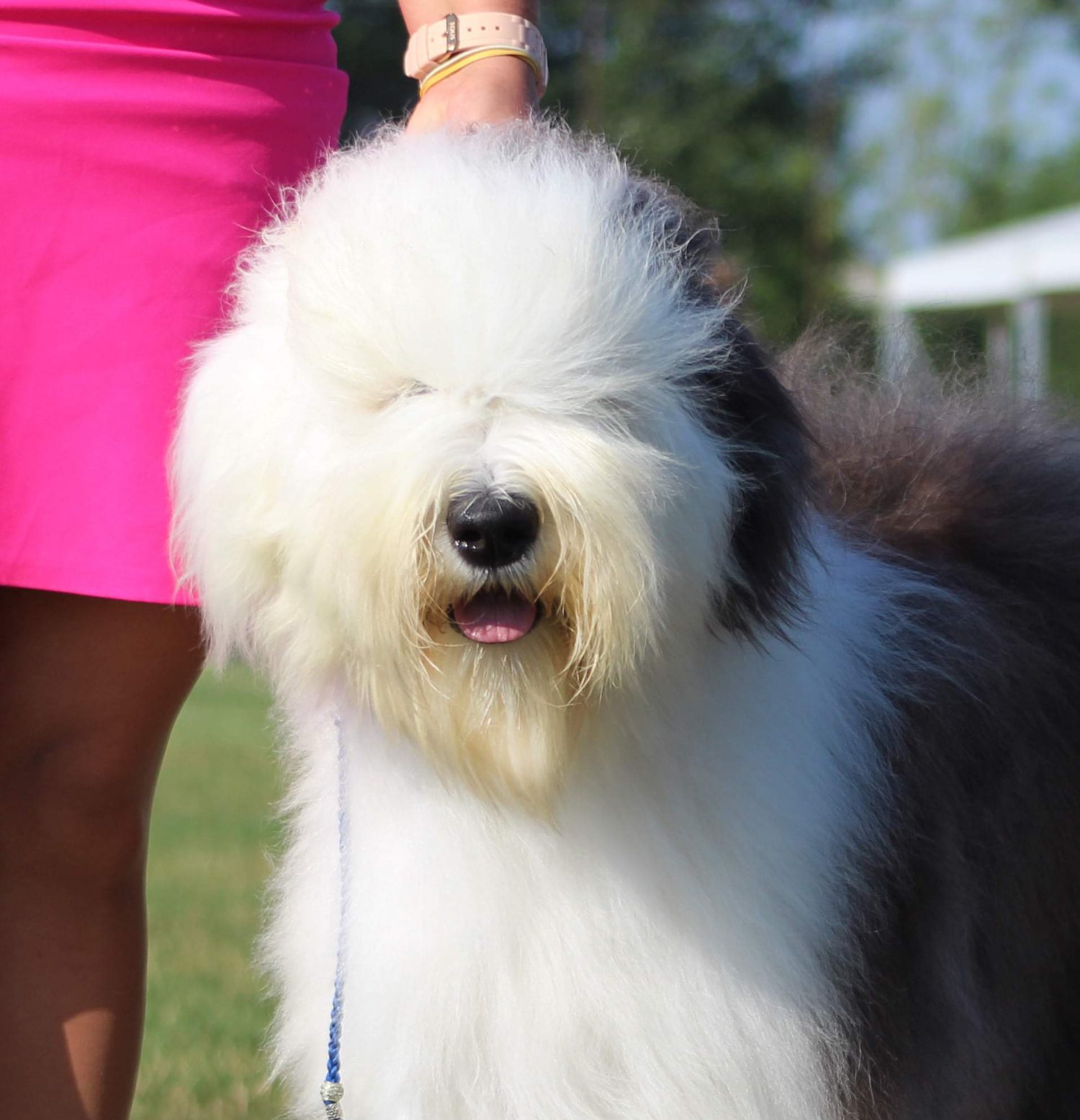 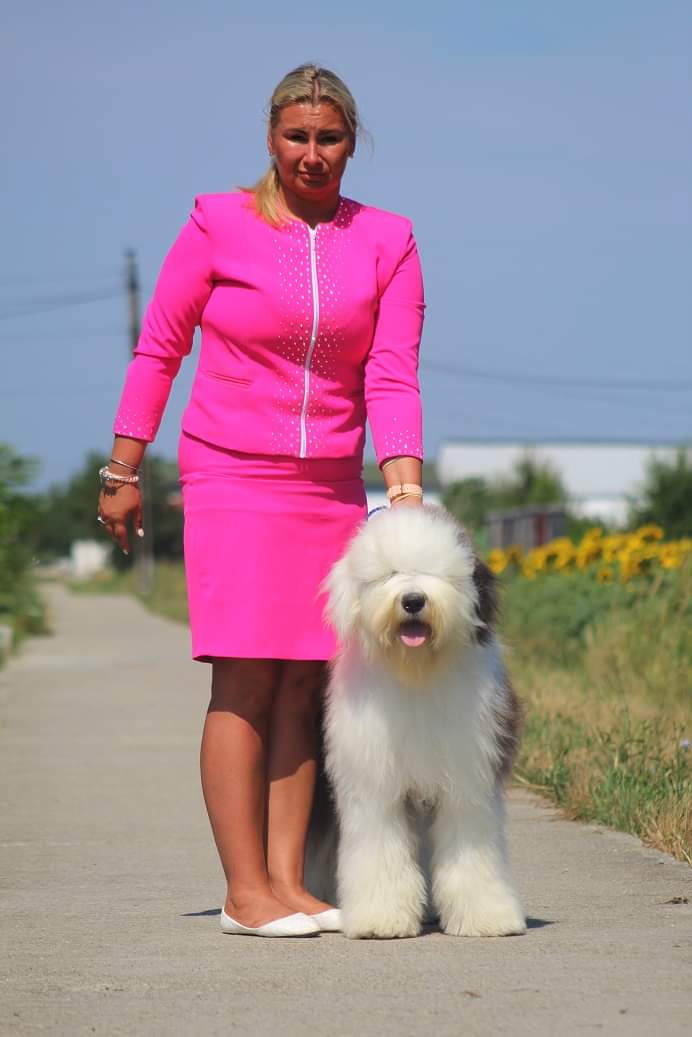 “Zoe”  Ch. Quadriga aus dem Elbe-Urstromtal” was also successful in Slovenia this weekend. A double CACIB show took place there. Ms. Laminger won CACIB and best of breed with “Zoe” on both days. Now she has achieved the title of Slovenian Champion, as she also won a CAC and CACIB there in February 2020. 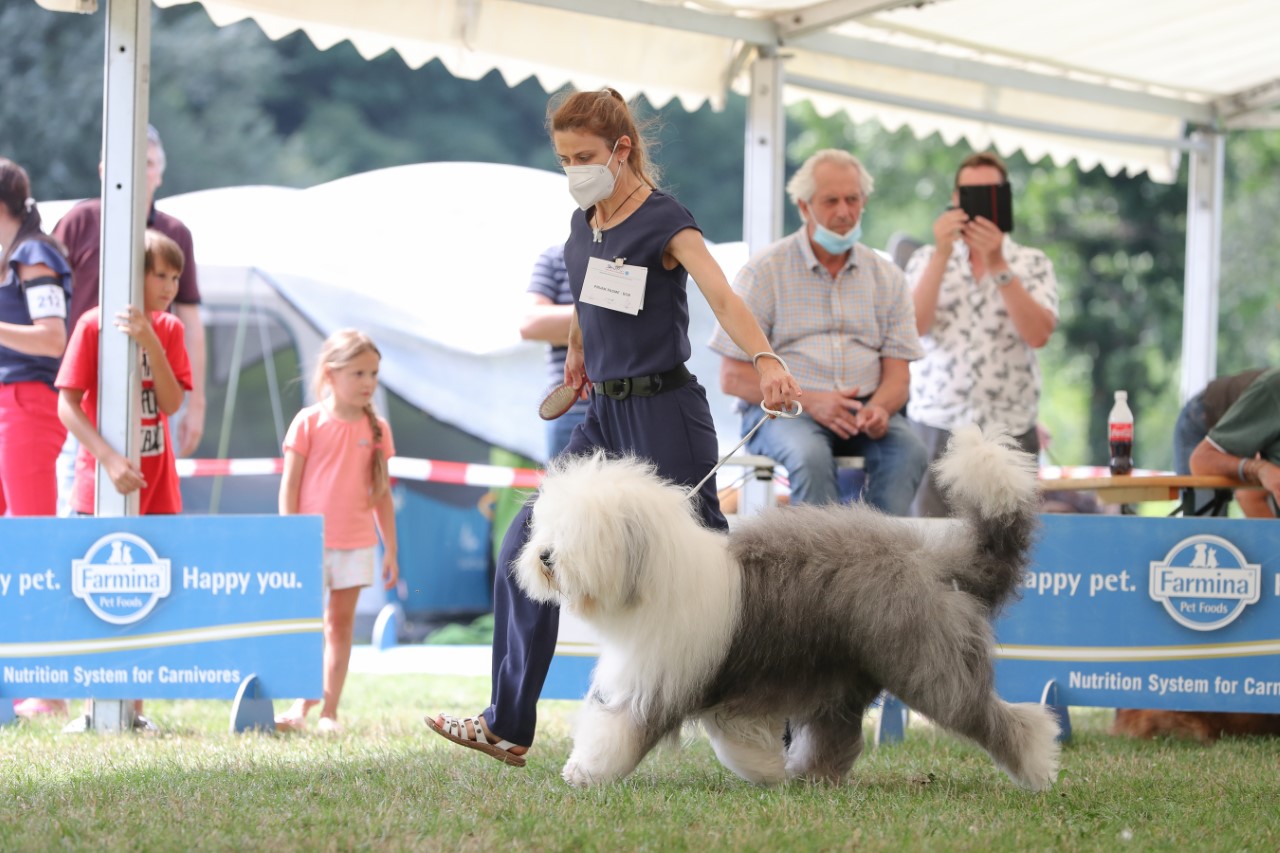 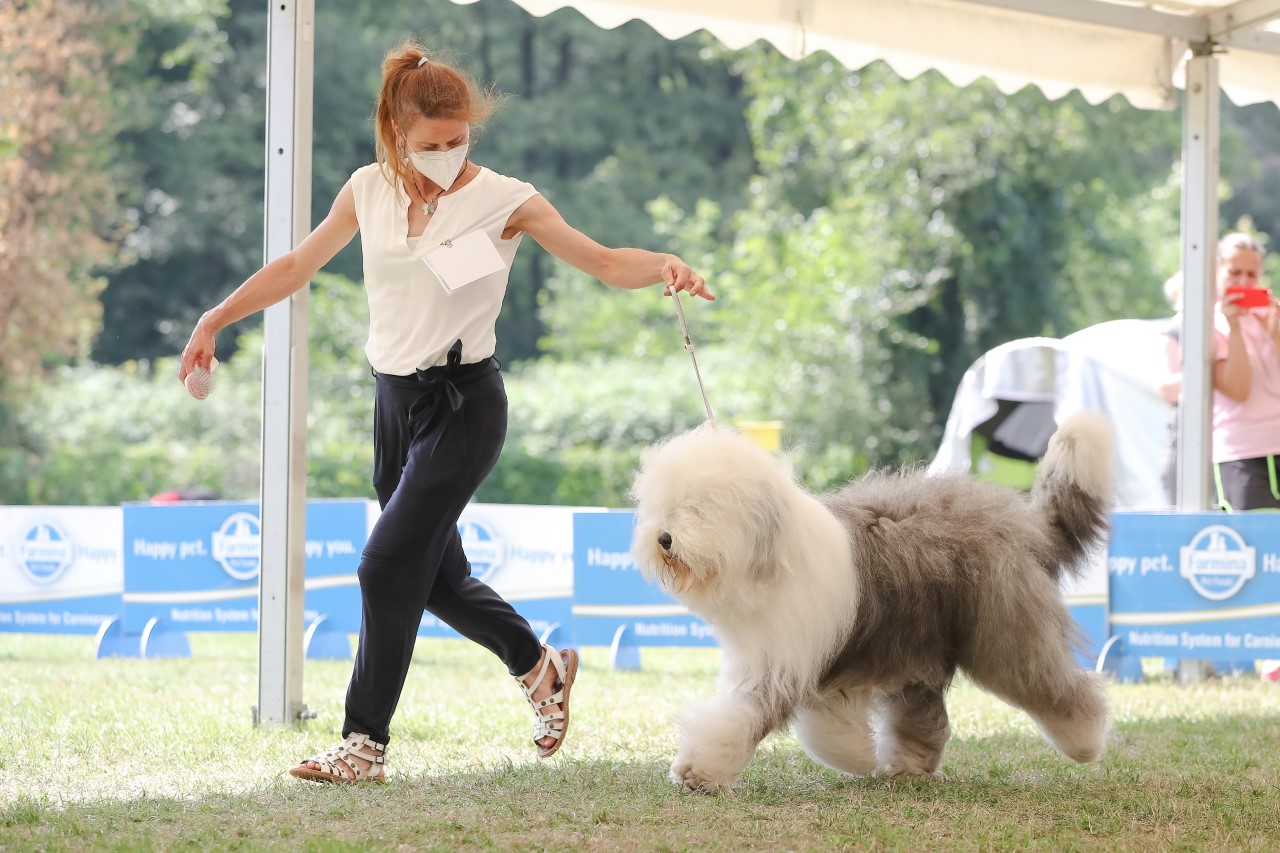 these photos were from February 2020 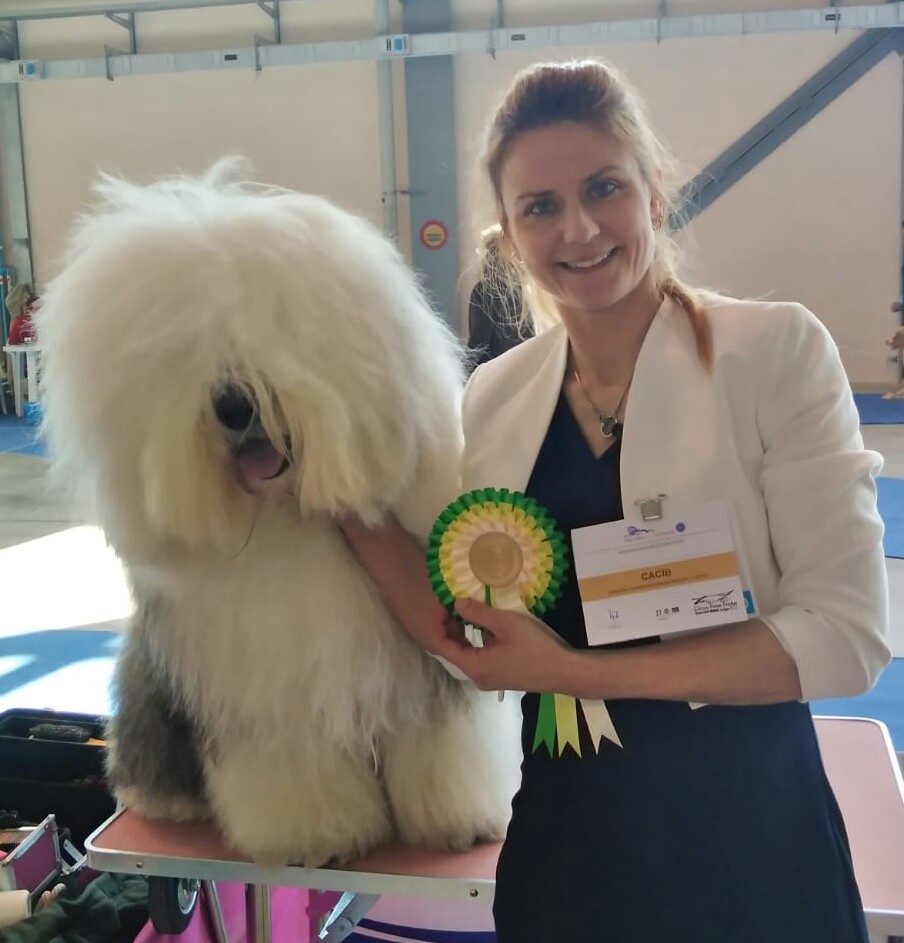 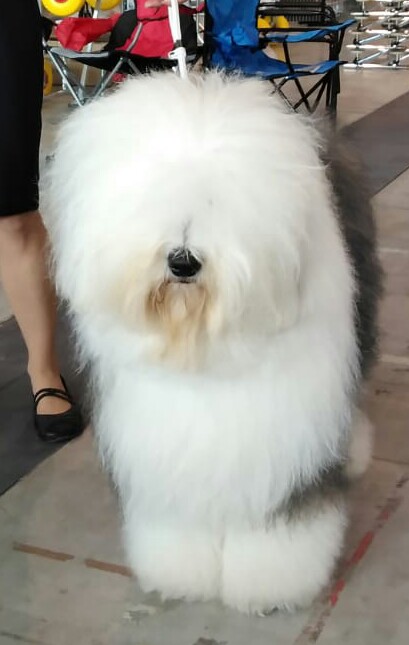