on 8-8- the first CACIB show took place in Gorinchem / Netherlands, since September 2020 in Maastricht / NL. Everything was very strictly organized because it took place in the exhibition halls. We had entered Cooper, Lilou and our Ocean. It was the first exhibition for Ocean. We were allowed to go into the halls at 8.30 a.m., and the judging began at 9 a.m. That was MEGA stress. Of course all 3 dogs were groomed on Saturday, but everything still has to be groomed again. We were only allowed to stand in a “bubble” measuring 1 m x 1 m …. that is impossible with 3 dogs and cages and chairs …. time was also lost to make it clear to the employees that we paid  for 3 Dogs  and need space for 3 dogs. Finally they understood it, but it  cost a precious 5 minutes. I can no longer show 3 dogs in a row, I have become too old for that. That’s why I took the excellent help of the famous junior handlers Melissa and Priscilla van Oosten. These young, talented women are now over 18 years of age and are no longer allowed to participate as junior handlers. However, since it is their great hobby and passion to show dogs at shows, they are more than ready to show off great dogs. I am proud and happy that they  areagreed to handle  for me

at this show only 4 Bobtail were registered for the judge Mrs. R. Lochs from the Netherlands. Our 3 and my dear Chris Beirendonk with her bitch in the open class.

At 9 o’clock Priscilla was in the ring with “Rock me Amadeus aus dem  Elbe-Urstromtal“. “Cooper” was the only male and Priscilla showed him optimally. Best male CACIB and CAC

9.o4 Paul had to help and he had to show our “Ocean” Love’n Stuff Elbe-Urstromtal “in the youth class. Ocean is our new bitch that we bought in California / USA. Sometimes you have to have something new.” Ocean “has Ch. Z Bayroeth aus dem  Elbe-Urstrotmal” in her pedigree in the 5th generation. Paul and Ocen did a good job and she got Excellent 1 and the Youth CAC.

at 9.08  Chris and her “Romantic Rendezvous with Kate of Snowboot Bear” were in the open class with Excellent 1

at 9.12 me with “Lilou” Ch. Seejungfrau aus dem  Elbe-Urstromtal “Excellent 1. Lilou was best bitch with CACIB and CAC and Chris with Kate Res-CAC 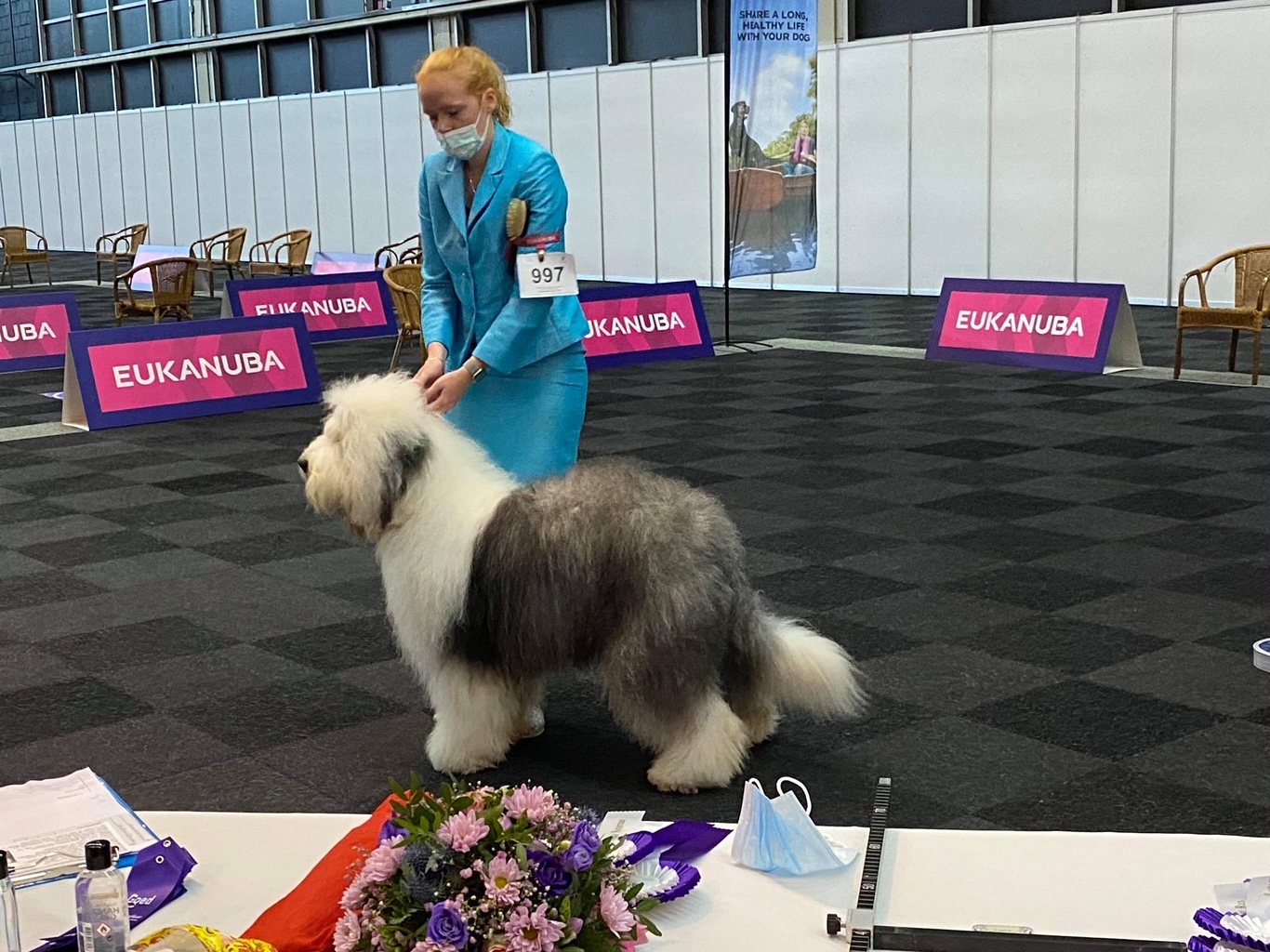 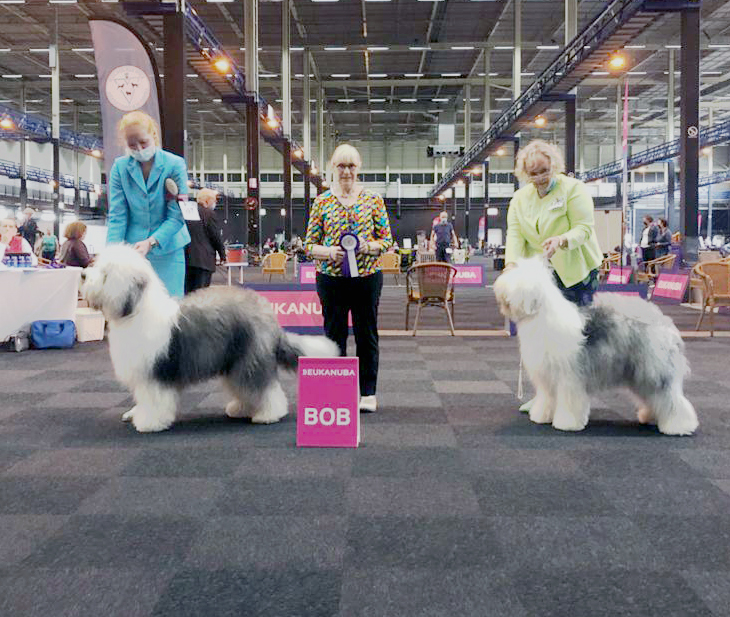 “Cooper” Many thanks to his owners, the Pütz-Turala family, who made it possible for me to visit shows with Cooper and to use him as a stud dog. 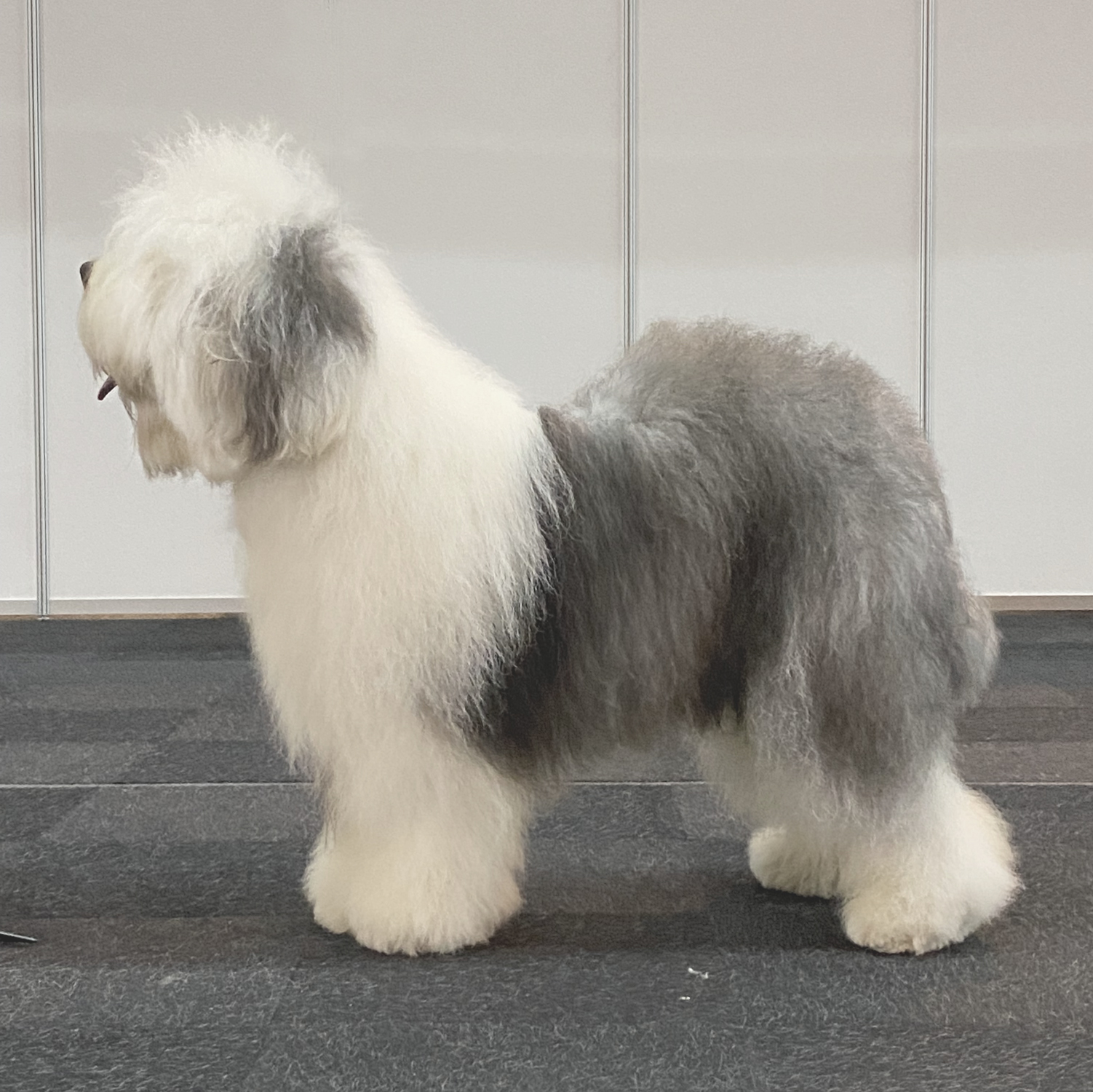 We couldn’t take a photo of “Ocean” Love’N Stuff Elbe-Urstromtal “at the exhibition, no time. We were only allowed to stay 60 minutes after judging. The photo is at home the day before 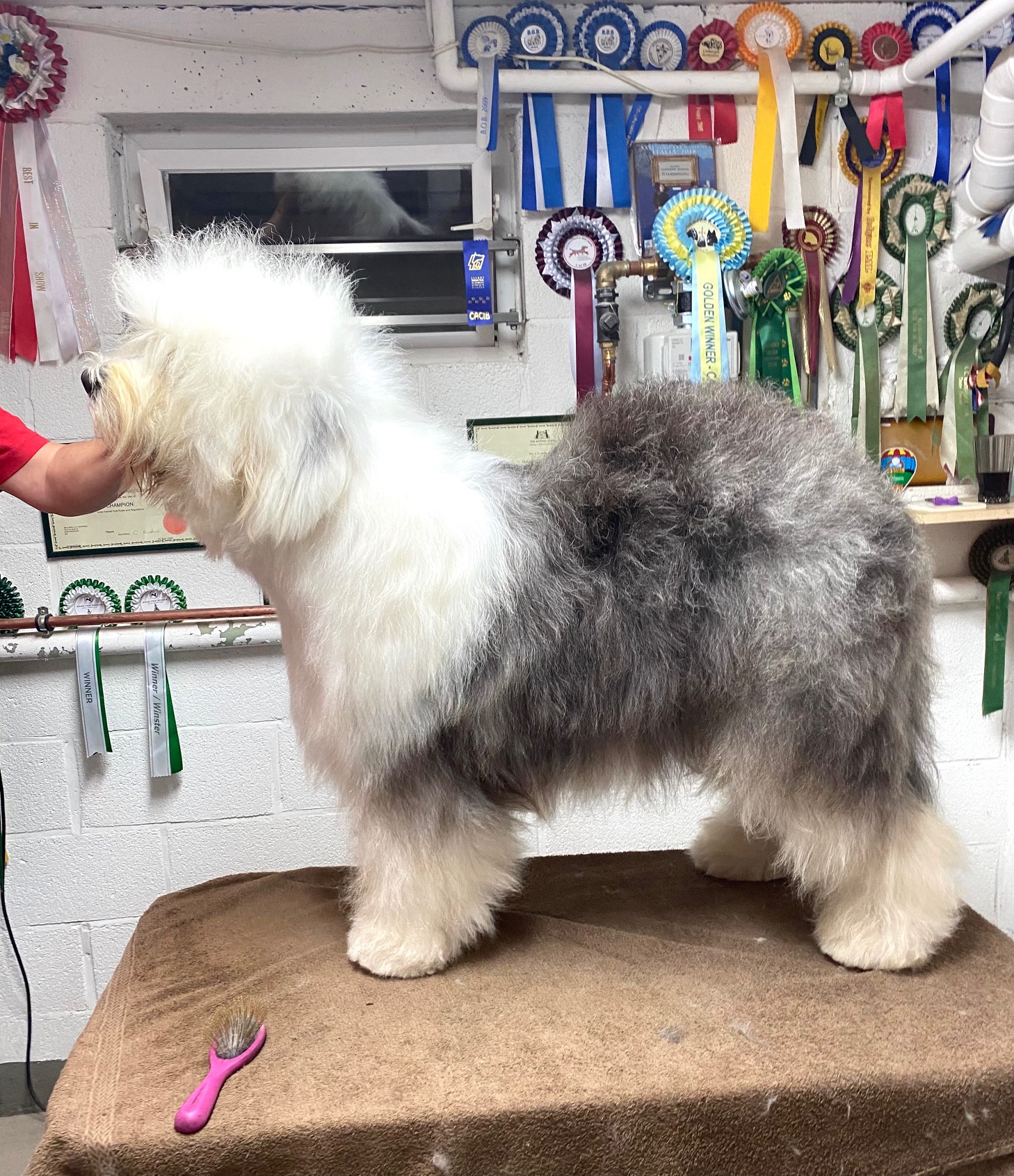 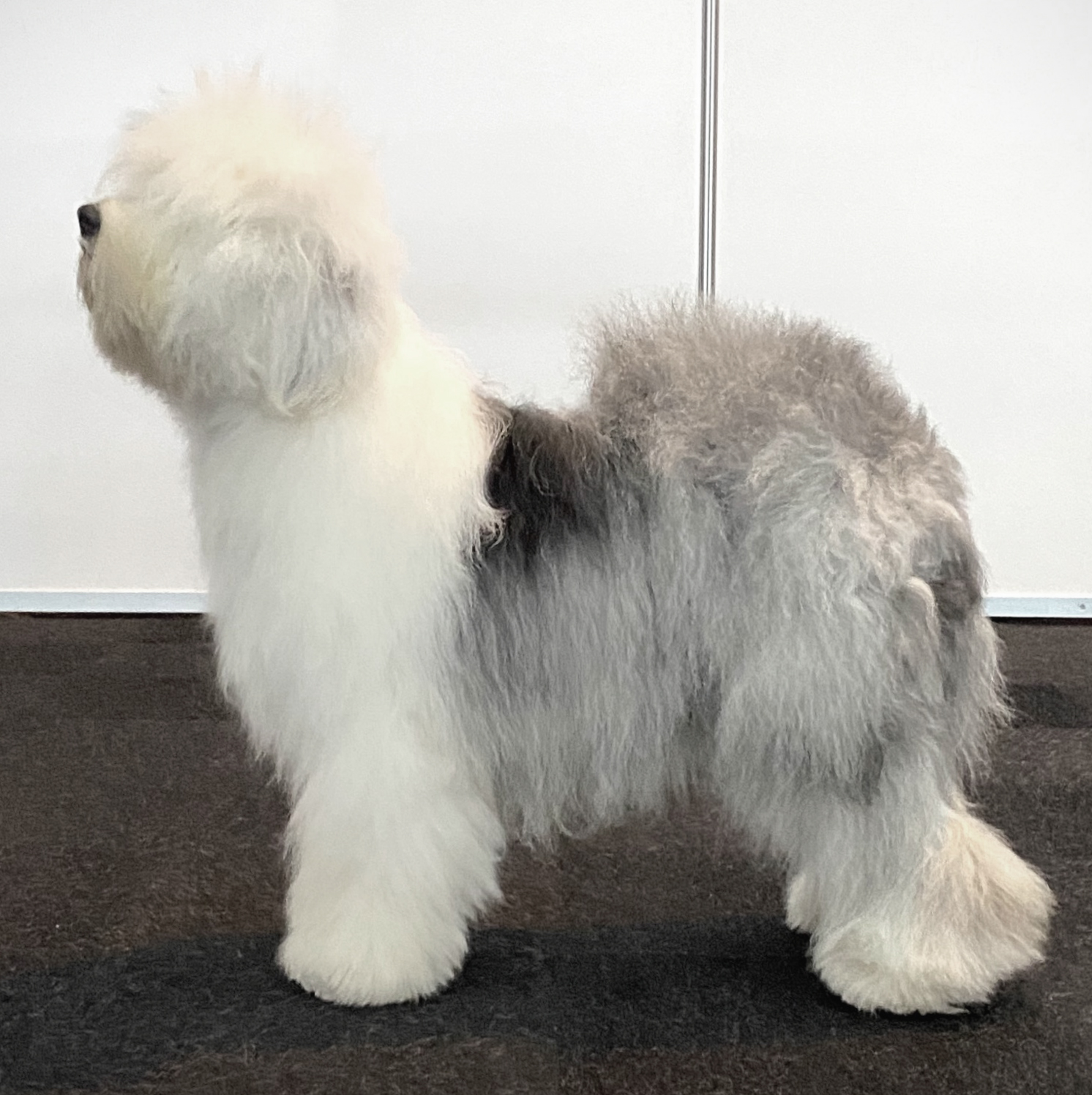 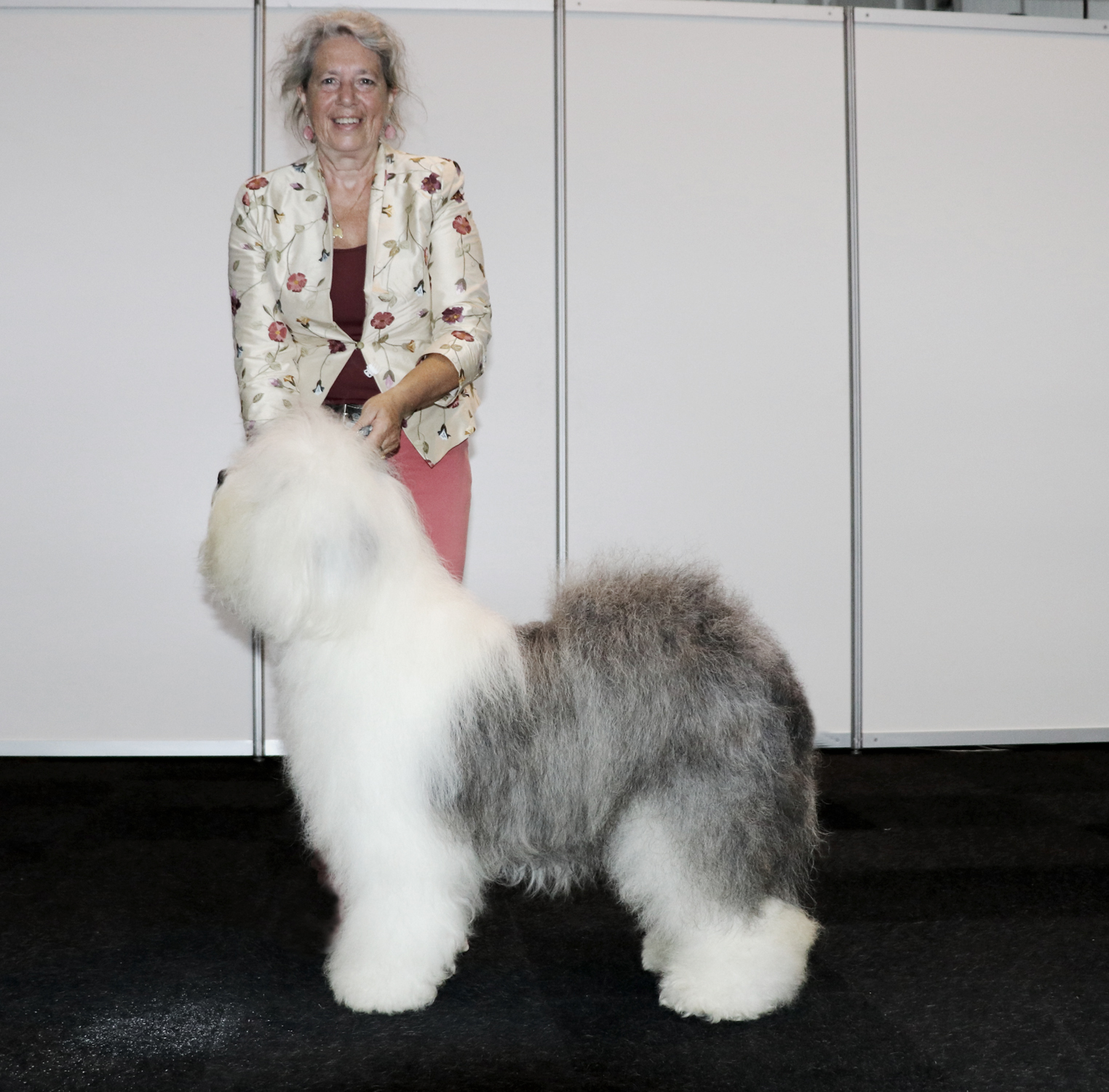 “Lilou”brother “Rolfi” Seepferdchen aus dem Elbe-Urstomtal” had his first open show (without qualifications, just to practice) in Sweden. The owner is Amilia Hemelin, whom we appreciate very much 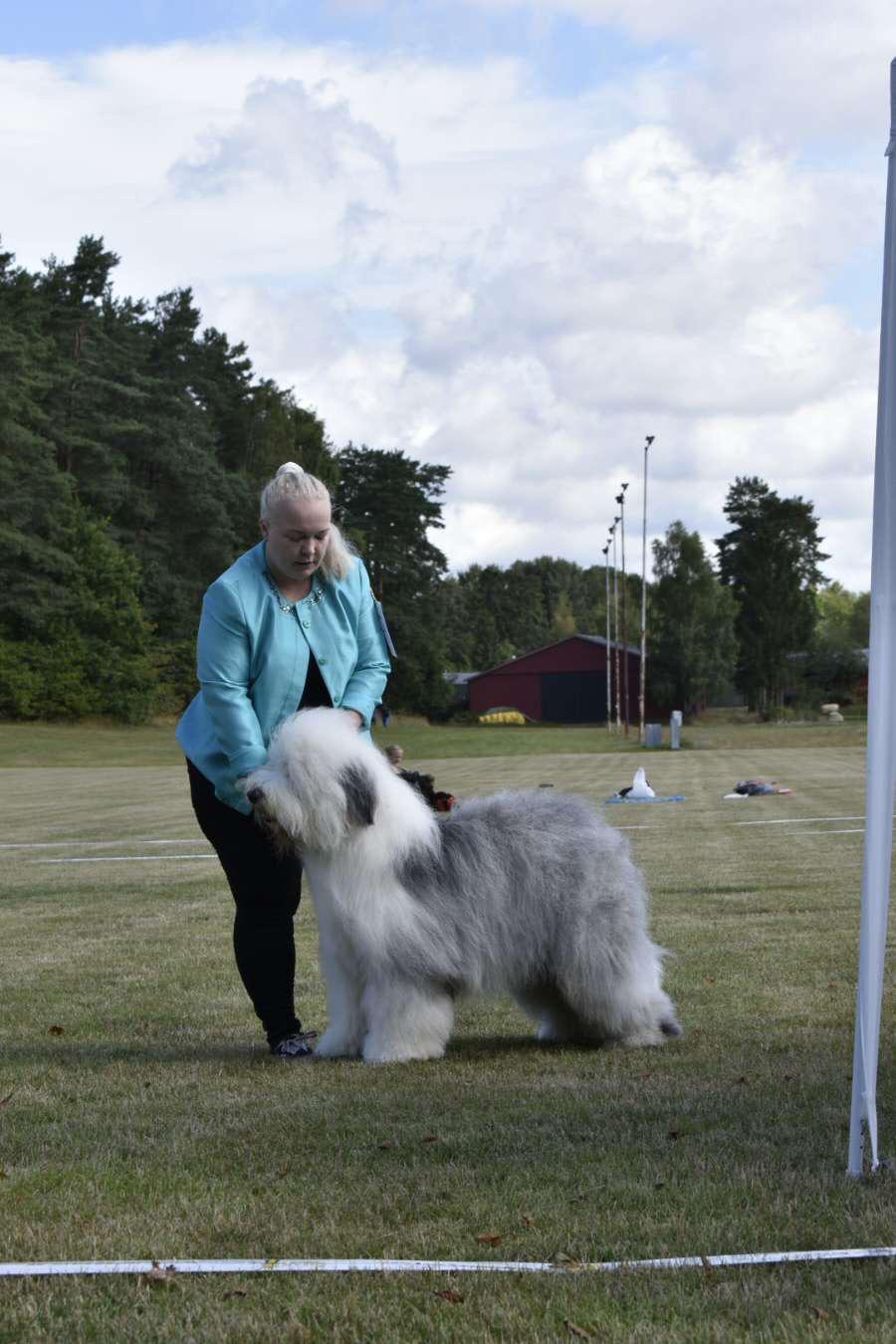 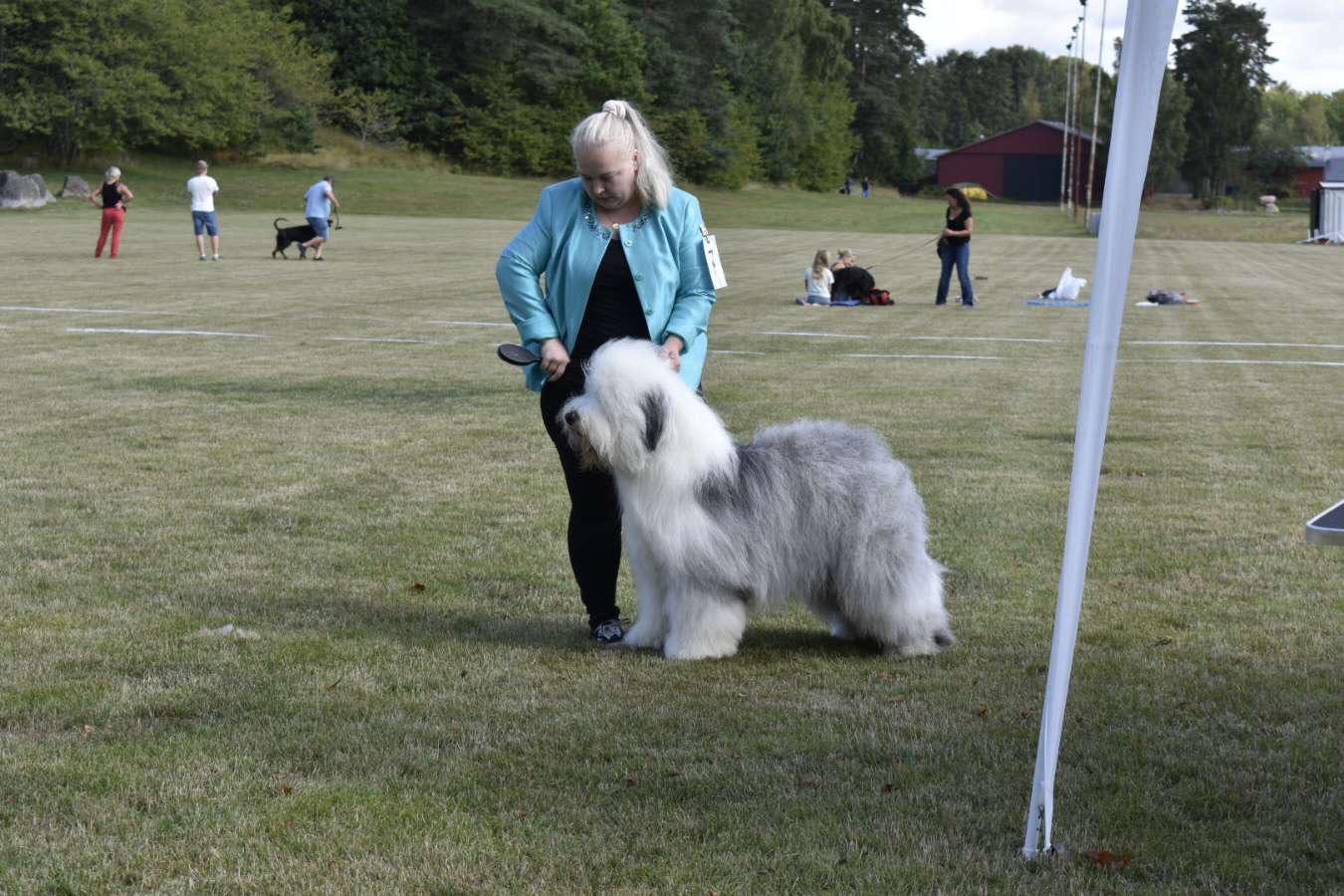 Ludwigshafen in Rhineland Palatinate, one of my favorite exhibitions, in good weather. Finally the regional dog association managed to organize a CACIB show. This took place on the weekend of August 14/15, 2021. Actually, we didn’t need any entitlements, we just wanted to go to the beautiful Rene Bohn Hotel, good food and meet friends.

We left on Saturday at around 9 a.m. Stuck in a traffic jam near Cologne for 1 hour. The A61 is still closed after the destructive tidal wave. We were there at around 2 p.m. and were able to move into our beautiful room straight away. “Cooper” and “Lilou” got a snack for lunch and Paul and I relaxed a little. 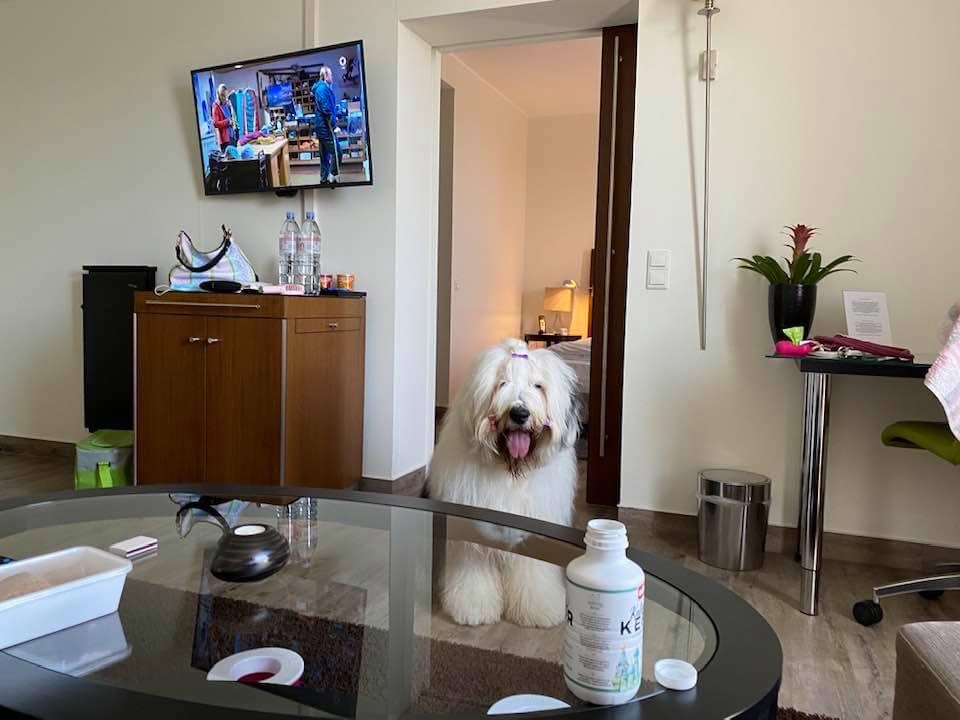 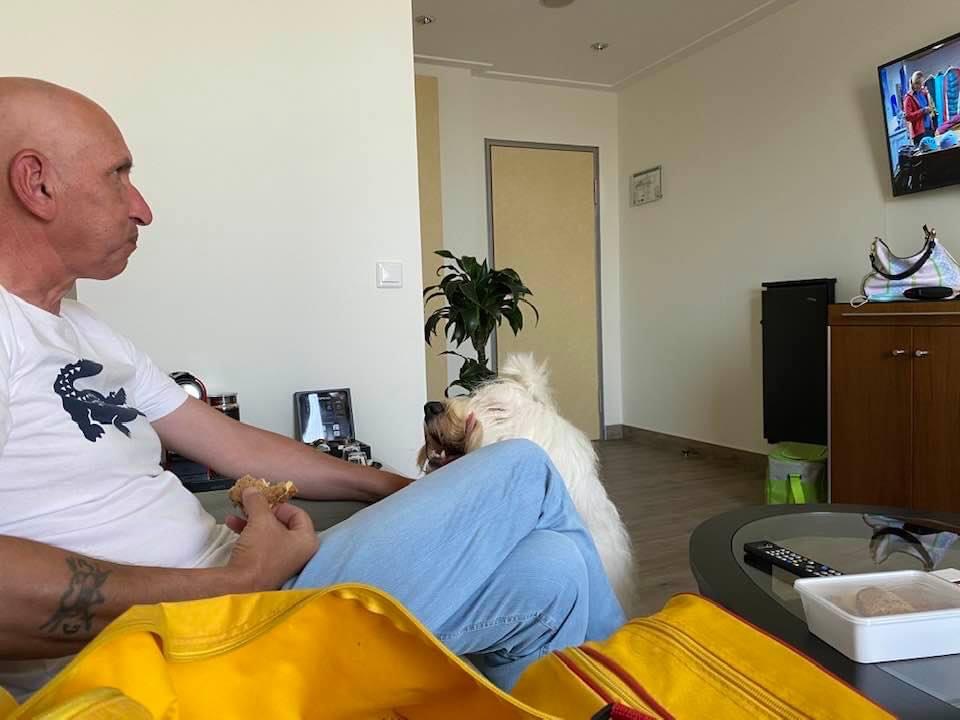 At 2.30 p.m. Mrs. Weissmann came for the styling with her “Ziva” and Mr. Grimm with his “Tannhäuser”. That was ideal outside atthe parking in the shade. It was 30 degrees that weekend. While I was working hard there,  at this time som  friends came alonge while seaching for  a parking space. At 4 p.m. I received an email from the exhibition management. Due to the increased corona numbers, you were only allowed to enter the showground on Sunday 30 minutes before judging and only the registered owner. 60 minutes after judging you had to leave the area again.  There were big problems for some. Fortunately, Paul and I were registered as owners, so that we were both allowed on the premises.

In the evening we treated ourselves to a meal in the “Marly” restaurant on the promenade of the Rhine in Mannheim. It felt like vacationing in the south. 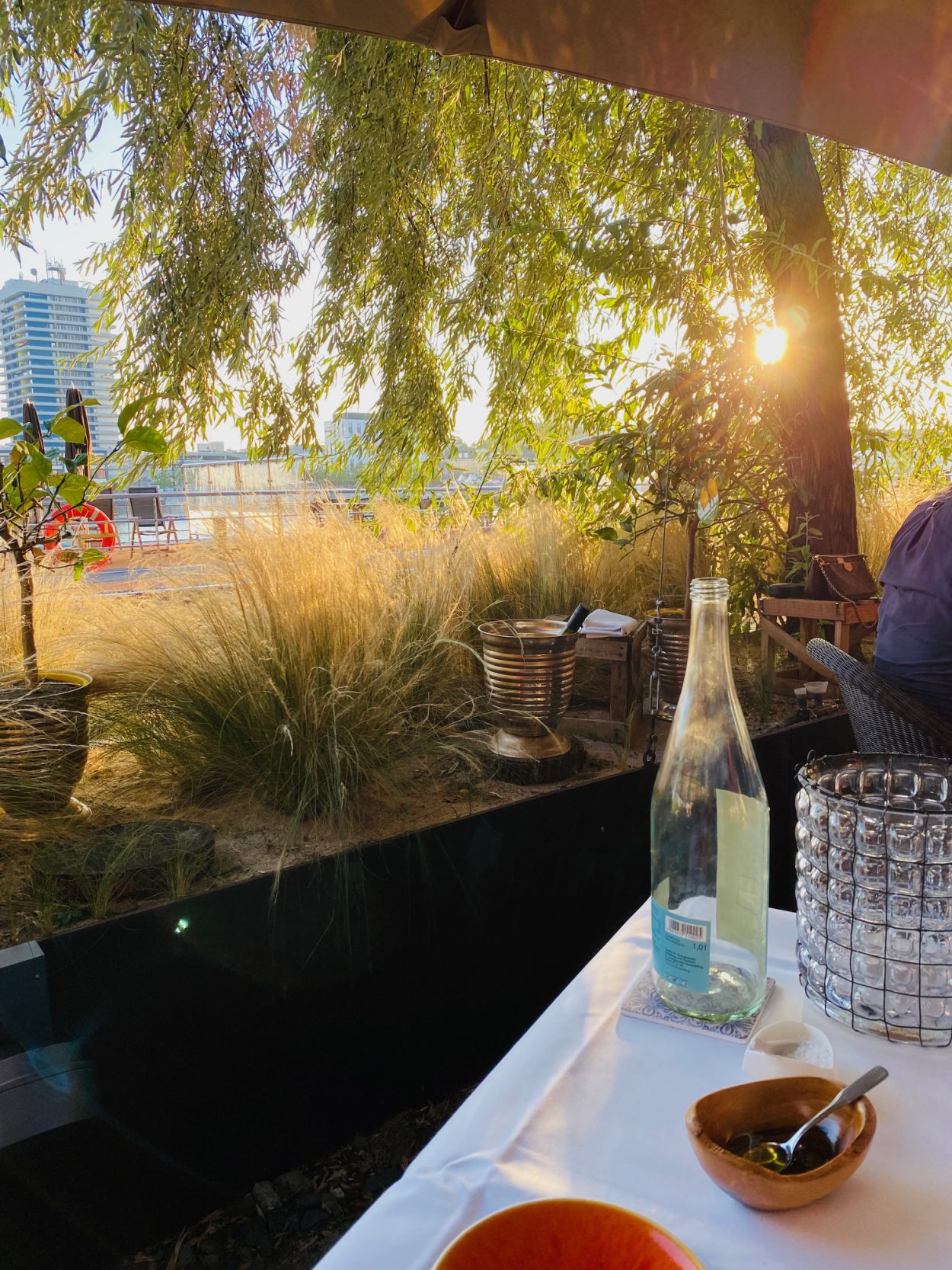 We had decided that we wanted to be at  the parking of the exhibition grounds at the Friederich Ebert Halle at 7.30 am. There I had time to brush through “Cooper” and “Lilou” again and get them ready for the ring. Before that, we were able to have our corona vaccinations checked and received a red ribbon. With that we could get onto the site. However, if you forgot something in the car, you could get out, but not back.

Instead of being allowed in at 8.45 am, it was suddenly said that we were allowed to pass at 8.20 am. Everything quickly packed together and with the 2 dogs and all our luggage to our ring. The terrain is very beautiful, with a lot of old trees. These donate wonderful shade. Of course we brought our tent with us, but there was no time to set it up. 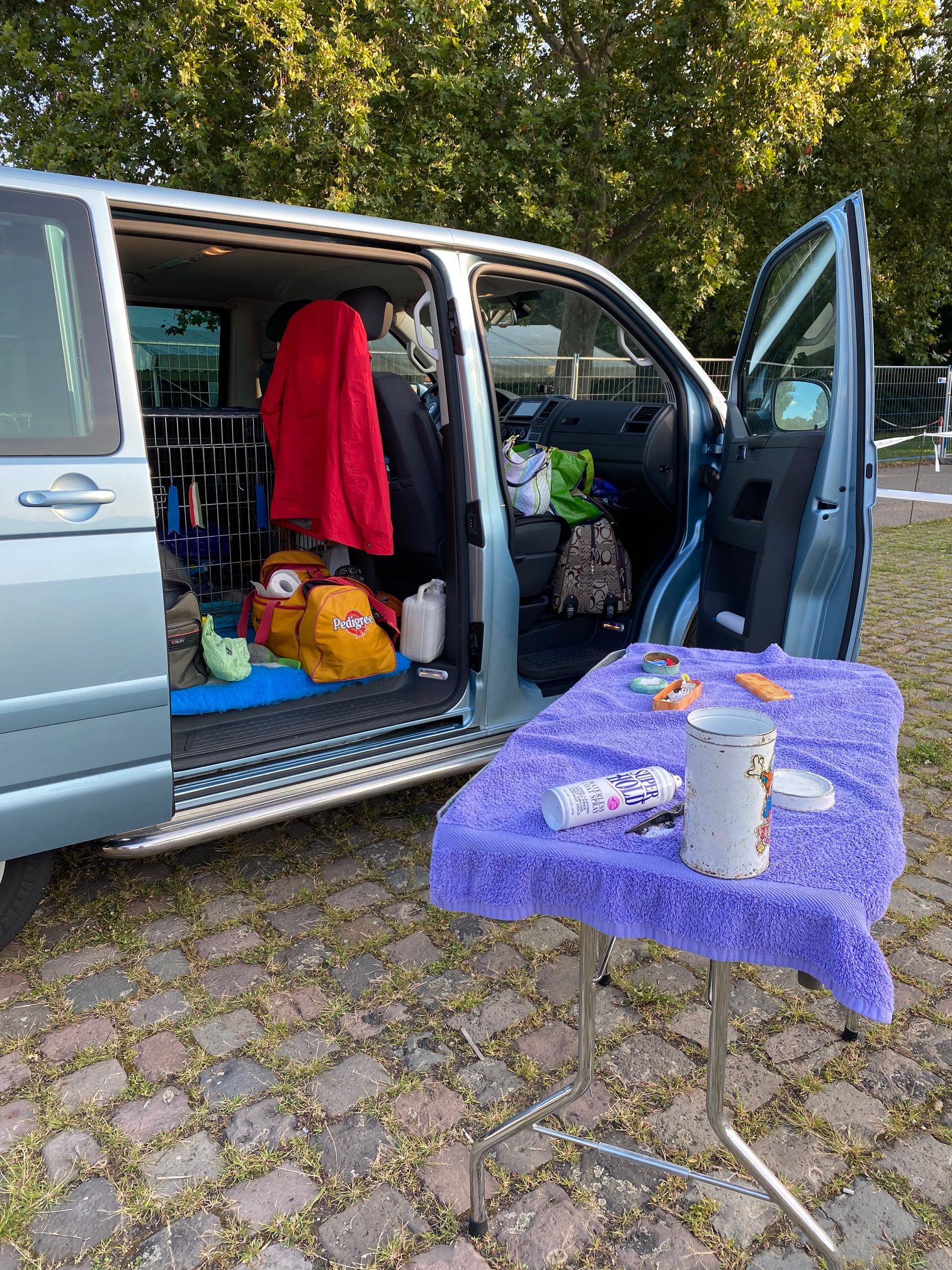 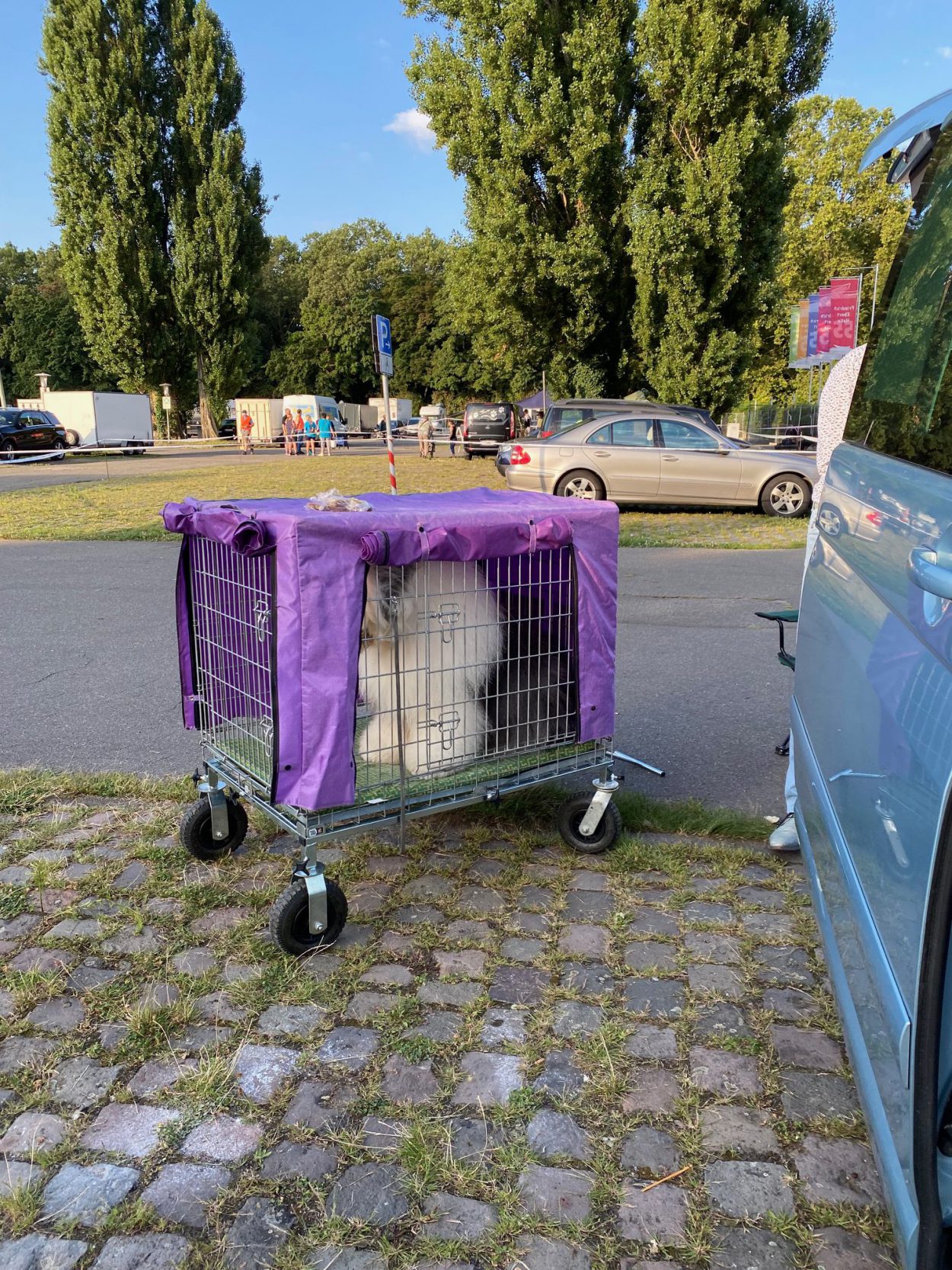 A total of 15 OES were registered for the judge Ms. Ursula Langer / GER. 2 were missing. I don’t think I’ve ever showed dogs under her before. “Ziva” Sexygirl aus dem  Elbe-Urstromtal “was styled and waited for her performance. The judge finished it with the rating” Good “. She didn’t like Ziva’s teeth. What a shame, the rest of this dog is excellent and  the other judges were not bothered for her bite. That was very disappointing and I felt sorry for my dear Mrs. Weissmann. 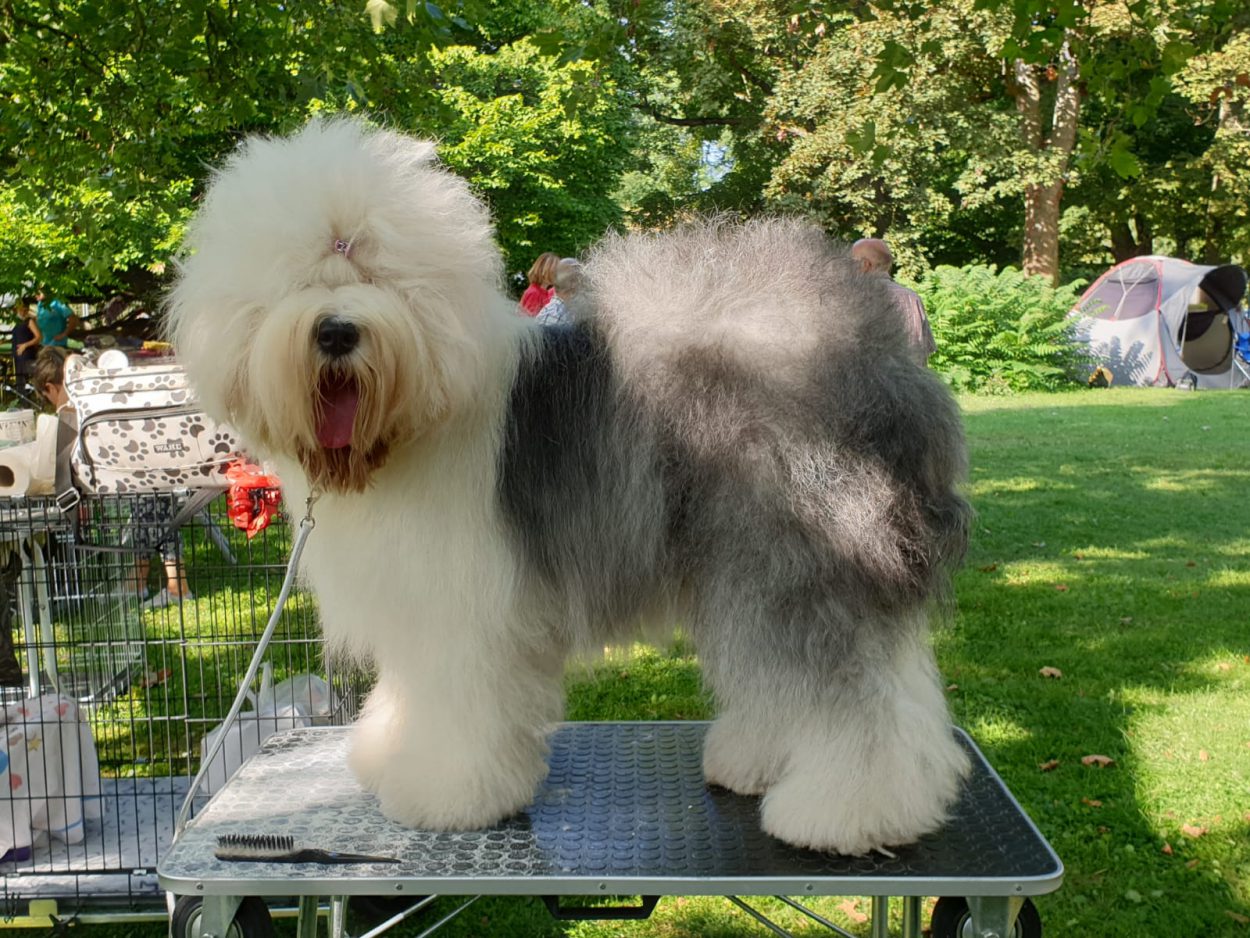 Ms. Weissmann took some photos of us waiting to be judged. Mrs. Kirsch with her Peewee and I with Cooper 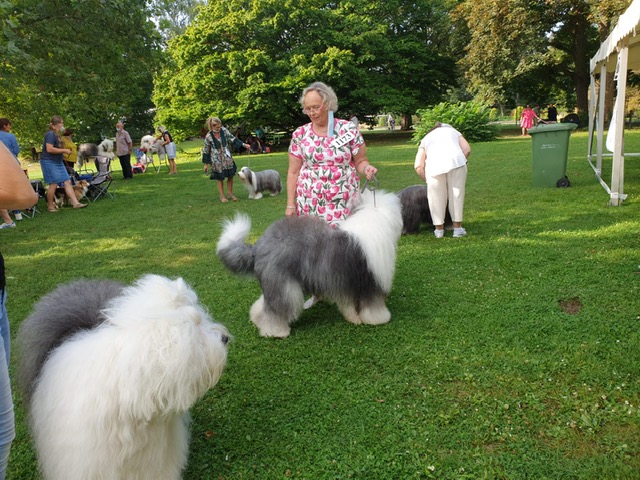 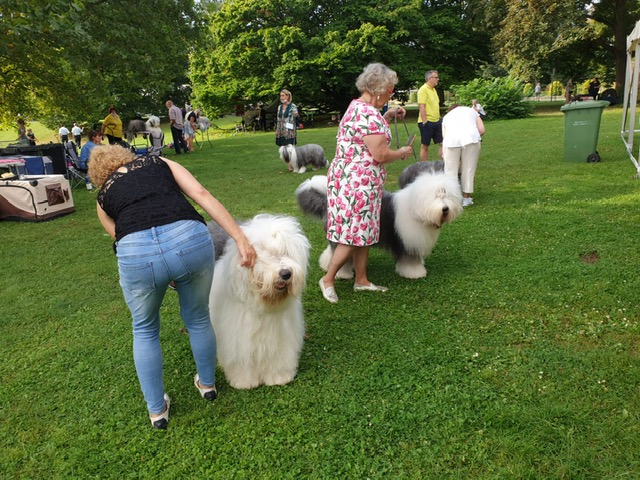 Mr. Grimm was with his “Tannhäuser aus dem Elbe-Urstromtal” alone in the youth class. He received Excellent 1 and Youth CAC. This is his 3rd youth CAC and therefore he has the title: German youth champion 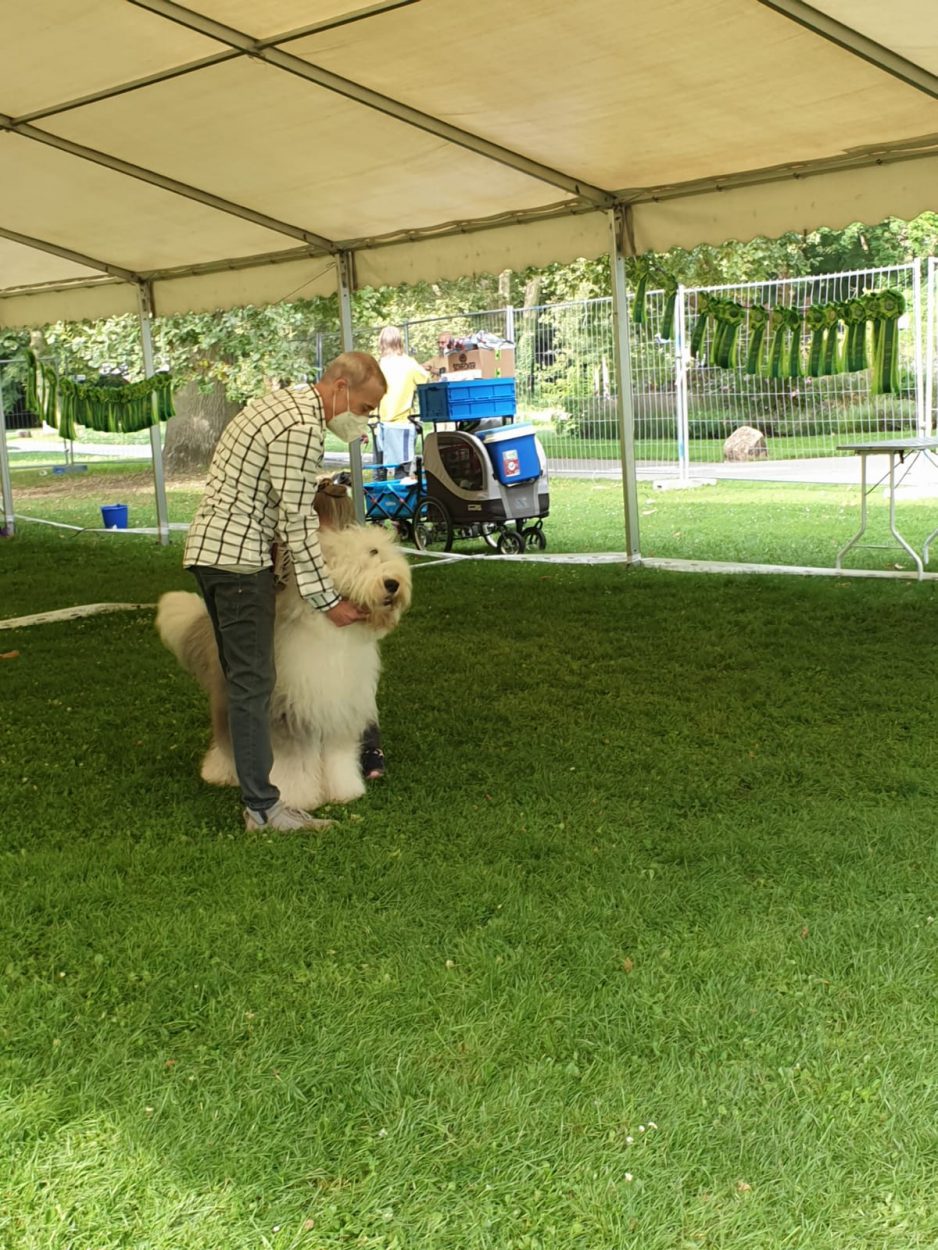 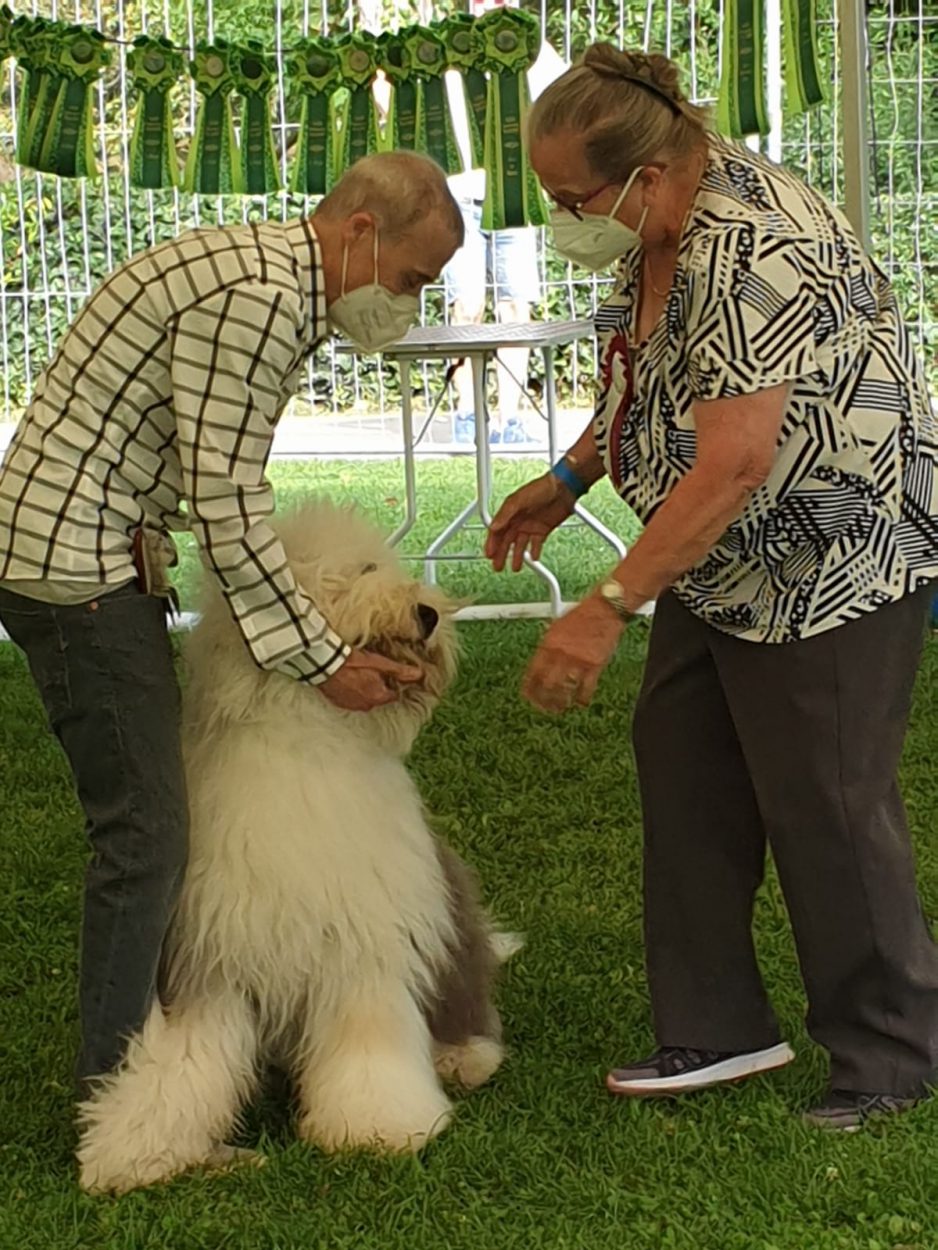 Gait … if you look closely you will see that the dog is pacing. That means he walks like a camel in relaxed mode. Say the front and back legs on the same side move forward or backward at the same time. Is very energy efficient. Every OES should be able to do. However, rather unpleasant at the exhibition because it looks very strange from behind. 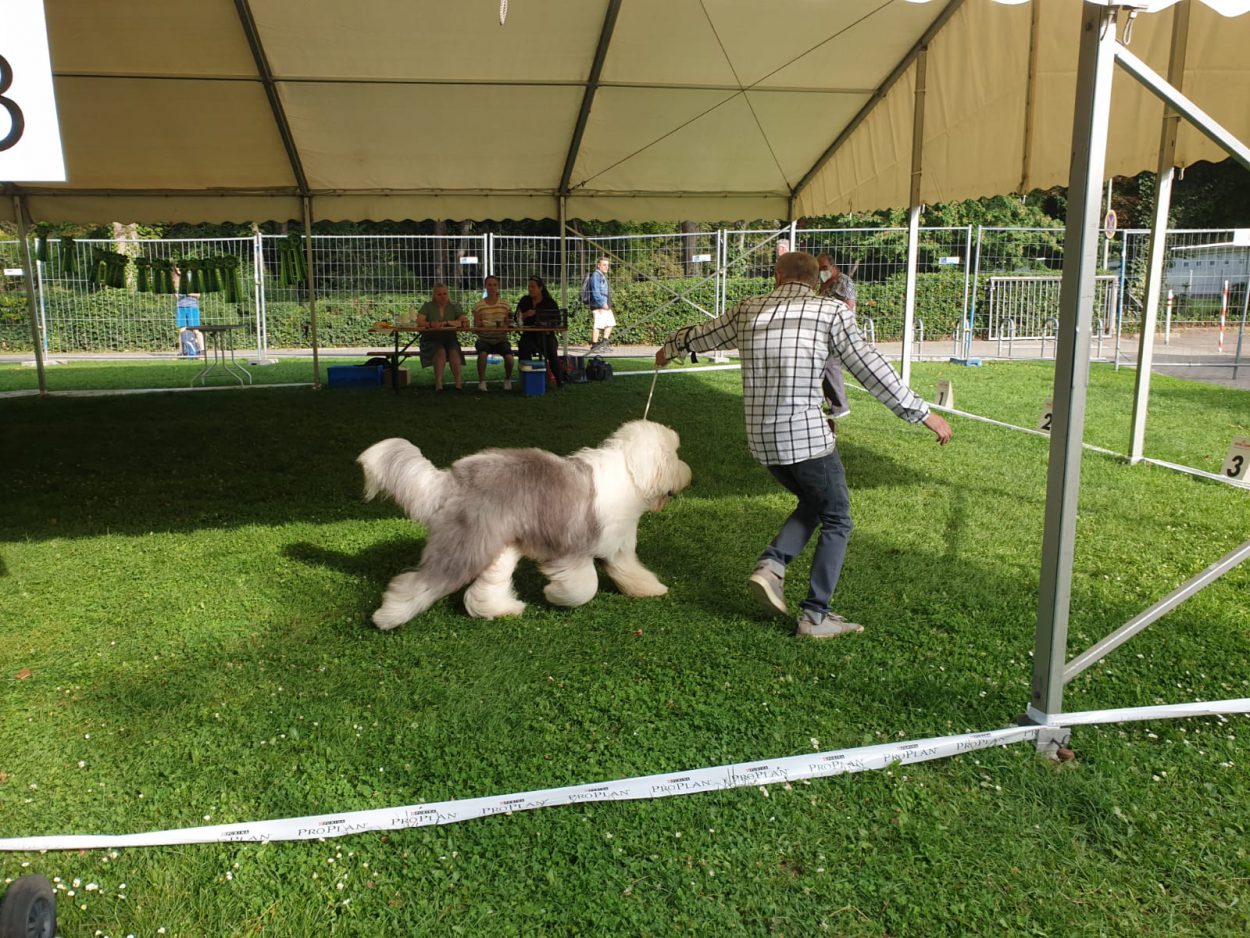 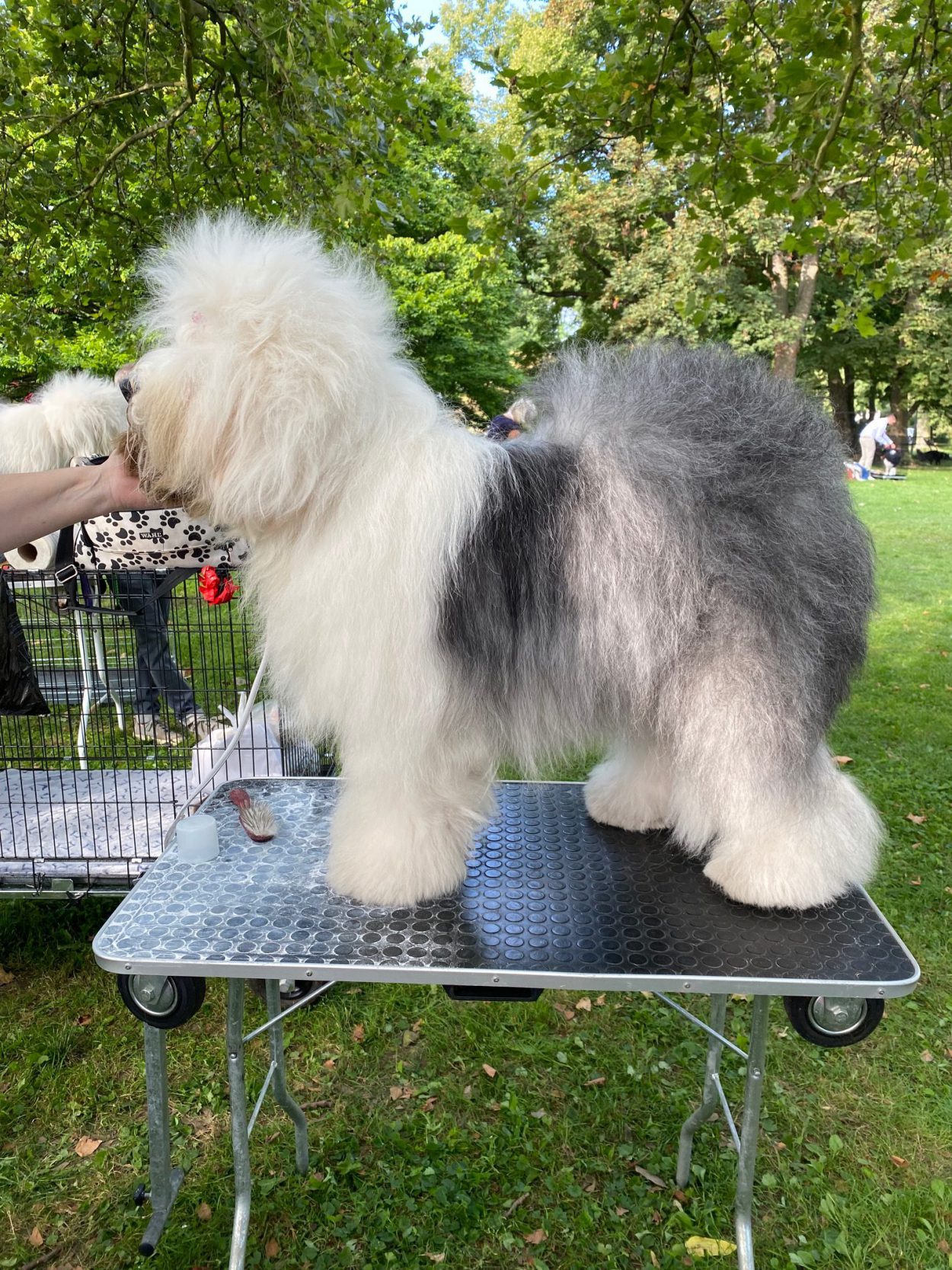 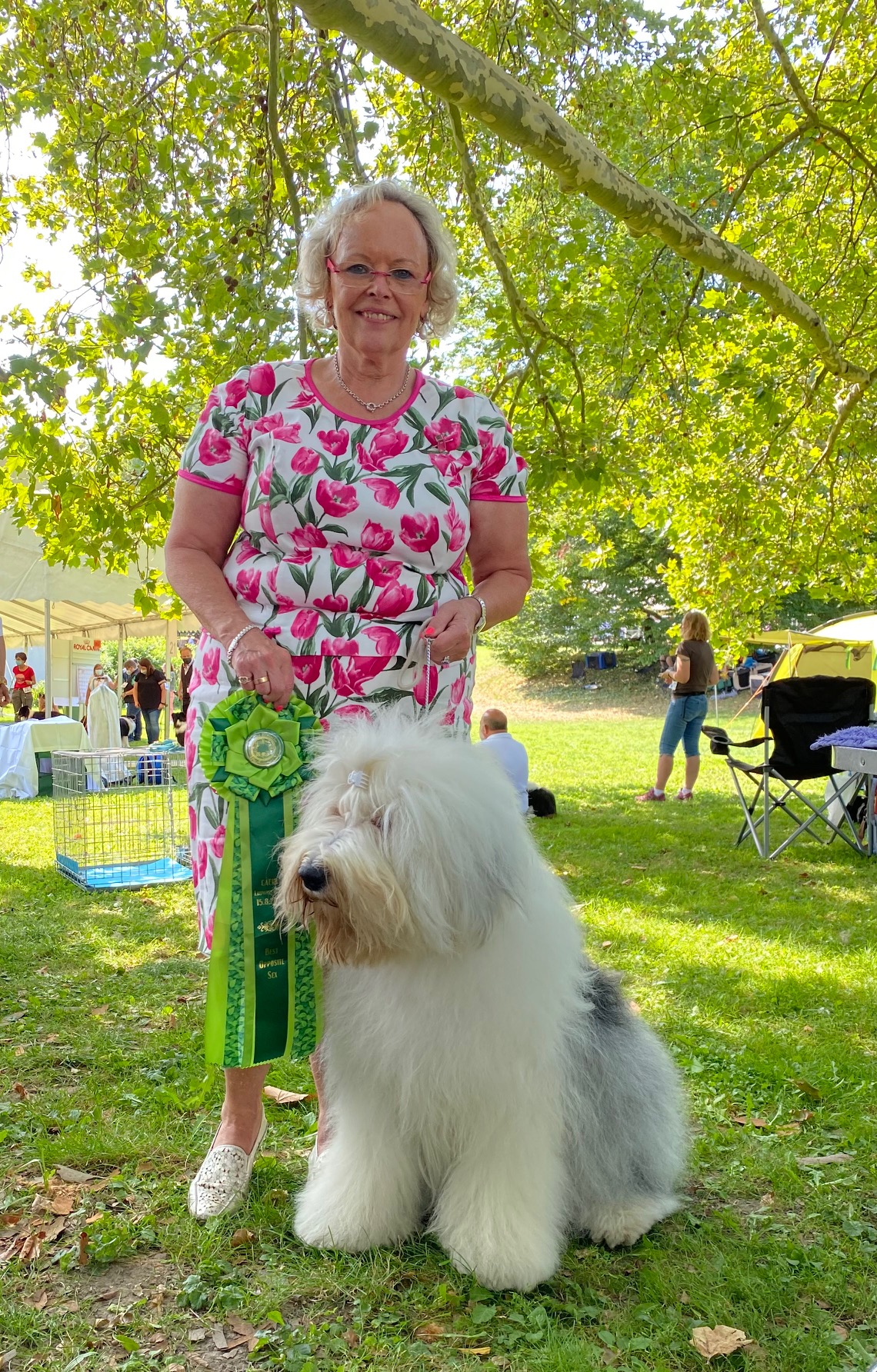 Each disadvantage has its advantage: We finished judging around 10.30 a.m. and were allowed and had to leave the grounds within 60 minutes. Ms. Leonhardt had to wait alone until the judging in the main ring began at 16.30 p.m. In 2019 we won the group here with our “Q’Anna Anka” and in 2014 we won the group with our Bearded Collie bitch Ch. Firstprizebears Meryl Streep ” Ch. and our OES “Himmlisch aus dem Elbe-Urstromtal” in 2nd place and .

On Sunday a special breed show from the Britisch Sheepdog Club was held  in Wurtha-Fernrode / GER. There were only 4 OES (3 males and 1 female) registered for the judge Mrs. K. Voye / GER. The Diringer family was there with  “Sean Connery aus dem Elbe-Urstromtal” and very successful. He was shown for the first time in the intermediate class. He received the CAC-VDH-SA and was best of breed. A super SUCCESS 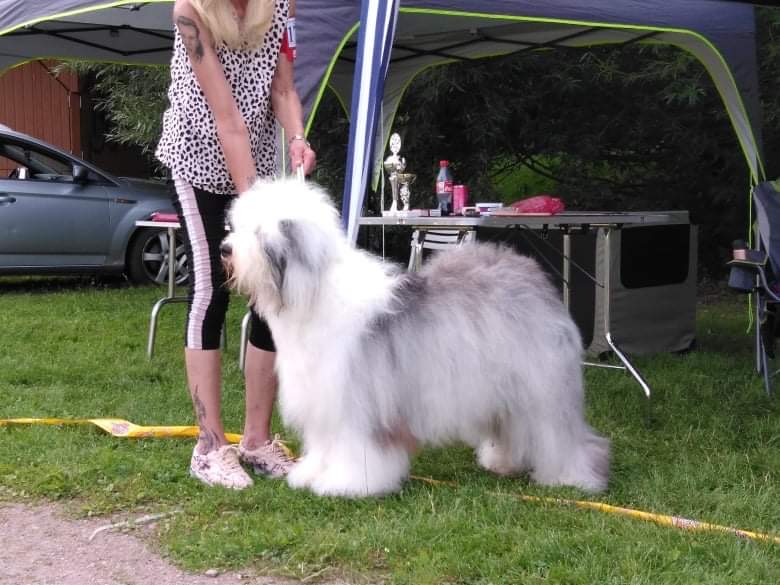 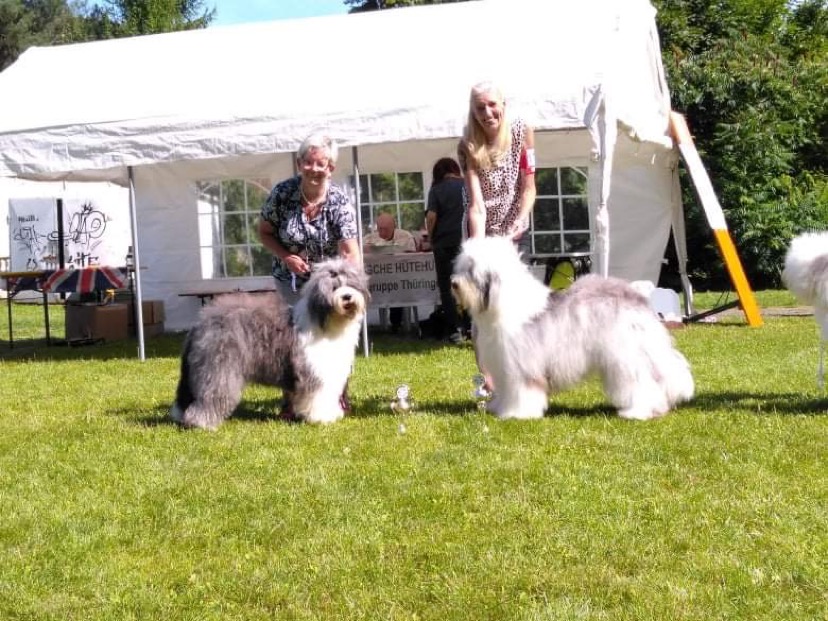 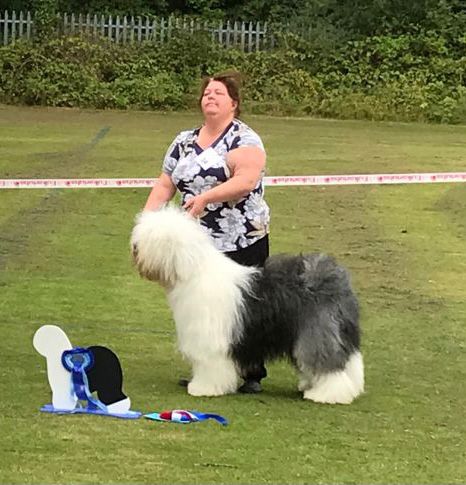 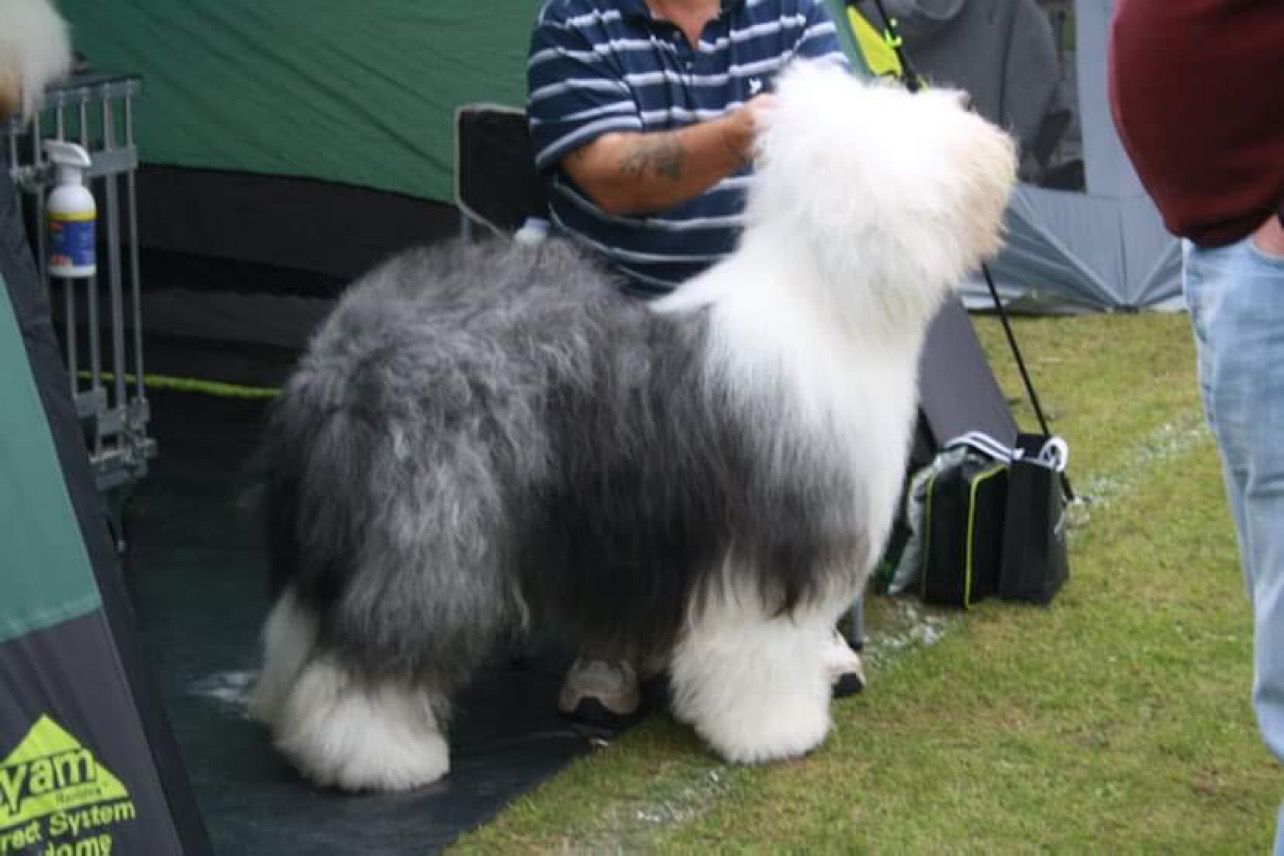 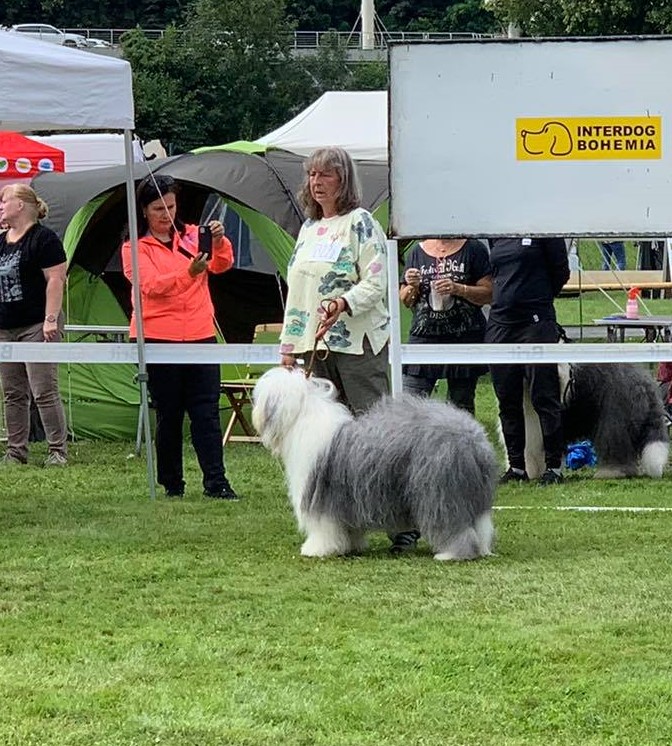 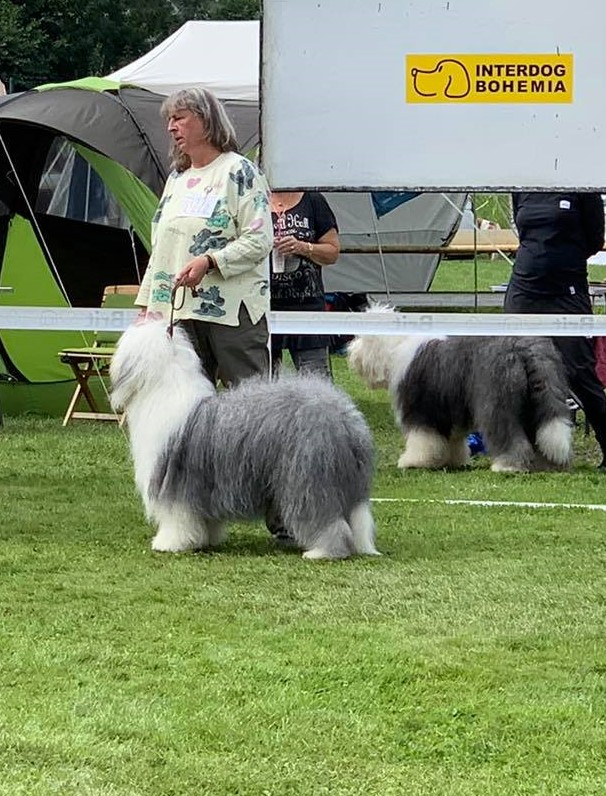 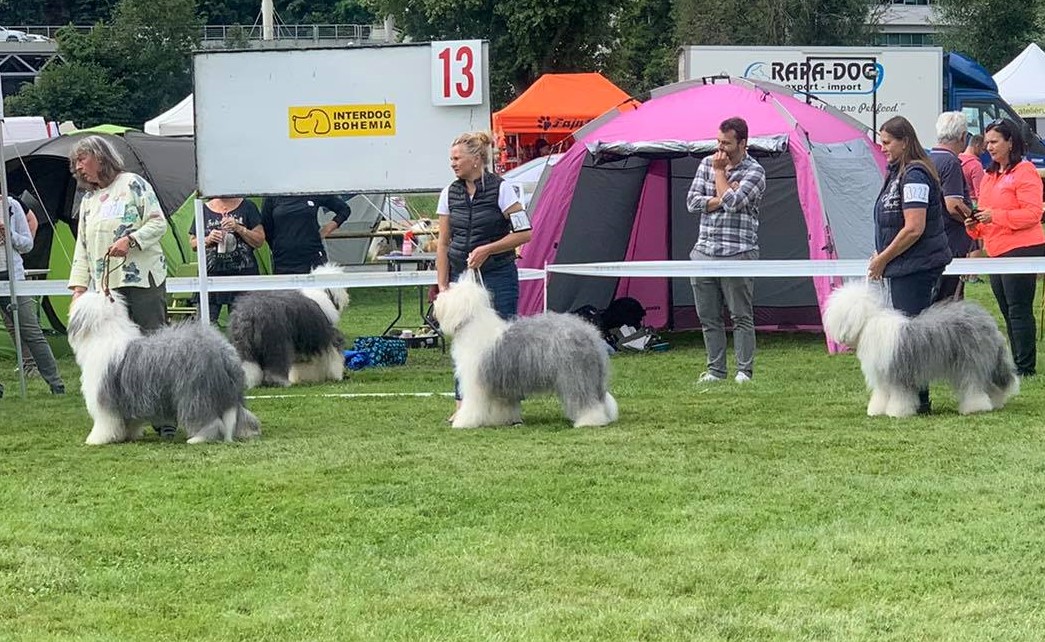