A walk through Maaseik

Due to a new set of rules made by the European Parlament, we are forced, to keep puppies, who are going abroad, until they are 15 weeks old. The is an enormous task, which almost demands too much from the Breeder. Neither for the puppies is it a fine thing. In this case, has the EU turned themselves against the dog, read puppy. The reason(s) for this new set of rules, is to stop the illegal dogtransfer(s) from the former Eastern European Countries. Unfortunately this is Mafia and behind them is a million money business. They are clever enough to find ways and means, to get around this system. The honourable breeder is at the end the bitten dog. I really do hope, that the FCI and the overarching organs can create an exception for this rule, for the FCI Breeder.

Thanks to this new rule, we still have three puppies at our home, who are now 14 weeks old and can and will be picked up next weekend. “Magnus”, On Special Request will move to the United Kingdom and “Little WanTan” (Oxford Maid) together with “Nasi”  (Ones Favorite) will move to China. In China, the new owner, also a Bobtail breeder is already anxiously awaiting them. For him it is a very expensive investment, as 2 people have to come over here to collect the dogs and bring them to China. Only 1 dog allowed per person….

And because we want the puppies to be socialised, it is necessary to show them the large and big world from their eights week of birth. This included, taking a bad and afterwards being brushed on Friday. Afterwards they went by car to the city centre of Maaseik. Here in the pedestrian area they walked up and down, with lots of attection from other pedestrians. At the end there was ice they could lick on. 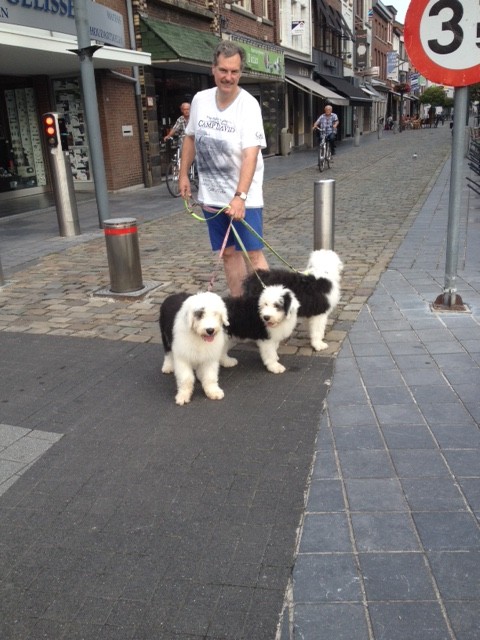 on the Market Square. 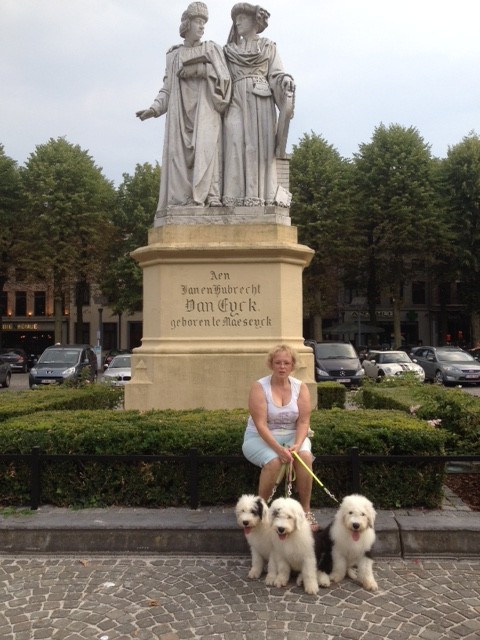