“Riley” has completed her study

The Rothkopf-Kreft family from Berlin has very special news for us. Her “Riley” aka “Sexiest OES alive aus dem  Elbe-Urstromtal” has passed the companion dog test.

So we can not only breed beautiful dogs, but we can also breed very smart ones.

The two women have a patchwork family and look after children who come from difficult backgrounds.

We received this report:

The examiner only had to laugh at the greeting, she never had such a long name. The others simply said: “Dog handler Horst Meier with Labrador Nora register for the subordinate part of the companion dog test!” and after weeks of practicing my “saying” so that I can do it without tying a knot in my tongue, I take a deep breath and get started:”Dog handler Ines Rothkopf-Kreft register with  Old Englisch Sheepdog ” Sexiest OES alive, auf dem Elbeurstromtal” to the subordinate part of the companion dog test!” 🤣 We are also extremely proud of our “superfluffy “, it is already being used for protecion. Outside protect our Joice, with whom she goes jogging and running besides the norman way’s and prevents Ramann from running away, in which she immediately notices when he puts on his stockings and then watches  him until we are with him. She even found him when he escaped from us and in the middle of the night the police saw no reason to give the dog squad  an official search order, without  they are not allowed to search. In my desperation, I had Riley fetched from home and she immediately took up the track and found him several kilometers further at the S-Bahn station, in time before he drove away . Our little Freya, who only goes up to Riley’s shoulder, loves her very much and both are a committed team – they even share the homemade treats. Oh yes, and it always brings me “vacation” at the dog training park, where we have a lot of fun training together  especially with Hoopers Agility, because the sports model” Riley”  is really coming out of breath and I now can  “remote control” her  very well from distance without coming myself out of breath.. Oh yes, we are totally happy with the dog that perfectly suits us and maybe when Ramann and Freya are no longer at home 24/7,  then we hope for an end to the “corona short haircut”, but somehow it fits to her too – well, let’s see. In any case, Ines sends greetings from everyone 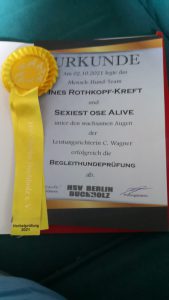 After 1.5 years of preparation, Riley celebrates her first ribbon. 🥳 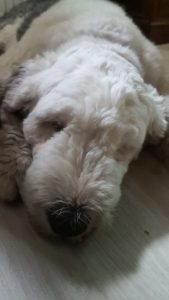 now she’s knowout… 🤣 Greetings from Berlin from the proud Krefts.